Finally, we got to see how the main open plan living/dining/kitchen spaces come together as a whole! There were mixed reviews from the judges last night but Harry and Tash took out the win and I have to say, I think the judges chose well. Here’s the recap…

The judges couldn’t believe how big the space looked. Shaynna said the furniture positioning made it seem grand. Neale said he felt like he was walking in and seeing the work of a professional interior designer. “There’s a level of sophistication and cohesion in this room that blows me away.” Shaynna said the void was impressive.

Darren said the furniture choices and the spaces left empty made the best use of the dappled light. “I love this, I love it so much,” he said. Neale said: “It really creates a strong sense of itself.” The lighting bothered him though. There was nothing apart from downlights and this wouldn’t allow for any ambience in the evening.

They noticed the dodgy paintwork around the fireplace but otherwise it was perfect. “They should be proud,” Shaynna said.

Darren loved the wide fireplace with its statement brick and solid concrete. He wasn’t sure it felt beachy though. Shaynna liked it however. Neale said he loved the brick which gave it a sense of heritage and age. He felt the monochrome colour palette was starting to become overkill though, and a little cold and unwelcoming.

Neale was harping on about the lack of lamps again. And Shaynna said there wasn’t enough interest at eye level. She said she just wasn’t feeling it.

Darren said the dining table was too small for a house with a huge entertainer’s kitchen. He agreed it needed more emotional drawcards too.

Neale said they’d done a lot well but it needed more. “It’s a case of injecting a bit more warmth so that it feels like just that: a living space.”

Darren was in sultry, moody heaven! Shaynna said the curved wall took confidence and was stunning, especially with the lighting. Neale said they’d done it again after their impressive kitchen.

Darren thought the dining table was gorgeous and Shaynna went one further and said it was sexy! But still no lamps for poor Neale!

Shaynna said the rug needed to be the next size up and to have a bit of pile to it. Neale thought the styling was a little ordinary. And Darren noted there was zero art but it was one of very few spaces where it wouldn’t have benefited from it, so that was okay. Darren said this was the sort of space which would help sell a house.

Pick to buy: (but not if you’re on a budget!): Christian Cole dining table

Neale and Darren agreed it did feel like a beach house and it matched the kitchen. Darren said they’d used the palette, the materials and the curved profile really well. He said the perfect luxury beach home would look like just like this. Neale said it was a really appropriate continuation from the kitchen.

Shaynna thought the room worked well with the rest of the house and loved the timber on timber and the pendant light.

It wasn’t off to a good start with the judges all saying the living space felt too small. And the missing dining table of course! Neale said it felt incredibly compromised. Darren and Neale said in a family home with 4 or 5 bedrooms it was a real misjudgement not to include one. Shaynna asked “what were they thinking?!” Neale said it wasn’t adequate for a house of that size.

Shaynna said the armchairs looked like they were set up for camping and it really needed to be rectified. A modular would work better. Darren said the space between the kitchen and the sofa was wasted. Neale said it was very, very odd. “It doesn’t feel like I’m in a living room.” Darren said they hadn’t allocated the right amount of space for the lounge.

Darren suggested they bought an expensive curved modular from Jardan to fix it! Neale said it was a “complete fail”. Ouch! Who will win The Block 2020? Mitch and Mark weigh in.
Last year’s flamboyant The Block contestants Mitch Edwards and Mark McKie, are back this week to share their thoughts on who has the best chance of winning the show come… 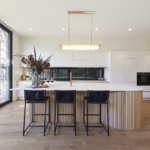 The Block 2020 kitchen week: What Would Jono Do?
Kitchen week is always one of the biggest on The Block. They say kitchens can sell homes and as someone who likes to cook a lot, I can definitely relate…
FacebookPinEmailTweet