Hallway and laundry week: the one week contestants underestimate every season. As a result three couples didn’t finish, but there were still some pretty spectacular reveals. Without further ado… the good, the bad and the ugly!

With an unexpected 10 grand in their pocket, plus a challenge win, the couple decided to reach for the sky, literally, with a cathedral skylight feature in the hallway. When the judges first saw it jaws hit the floor! “Is this the hallway or the ballroom?” said Neale. 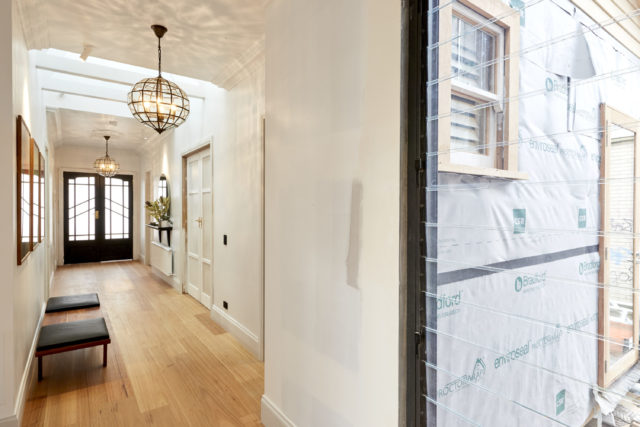 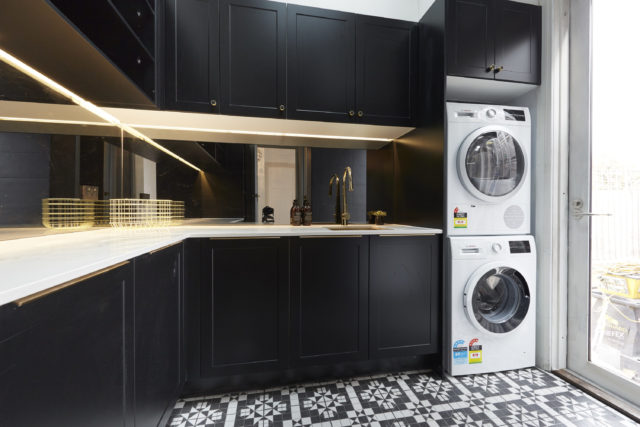 The rest of the hallway got a big tick, bar the pendants which Shaynna thought detracted from the skylights. All the judges agreed the couple had underestimated the scale of the project, with the execution letting them down. Paintwork was unfinished and even some plastering needed to be completed. 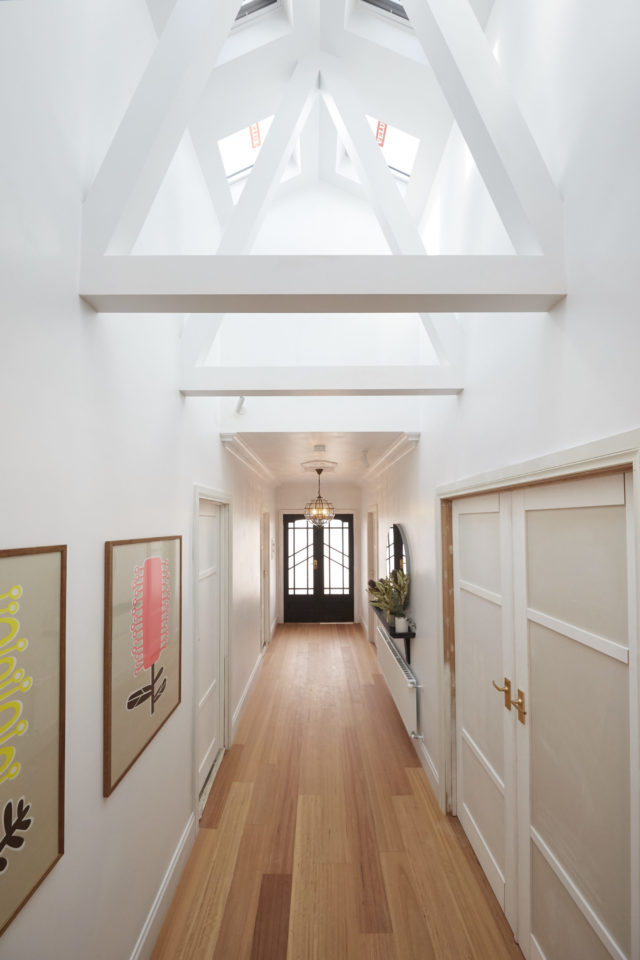 Into the laundry — with toilet, and Neale was big fan: “I don’t think I’ve ever used the word sexy to describe a laundry but I’m going to use it now!” The judges were fans of the smoked mirror, Caesarstone, dark timber, brass tapware and tiles, plus they agreed functionality was spot on. Despite not finishing, Jason and Sarah were named the most improved.

I would’t want to follow Jason and Sarah’s grand hallway, but unfortunately for Hannah and Clint, someone had to do it! Neale praised the room as elegant and restrained, however the compliments stopped there. Shaynna said it felt ordinary and criticised the couple for not panelling the hallway, like they had their living room (they will, they just ran out of time). Execution was also an issue for the couple, with dirty floors and unfinished painting. 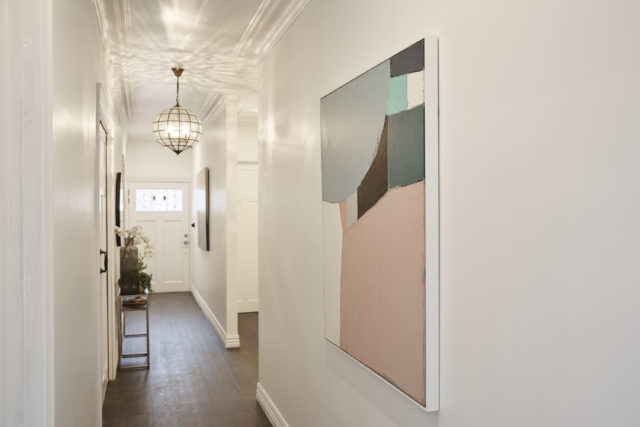 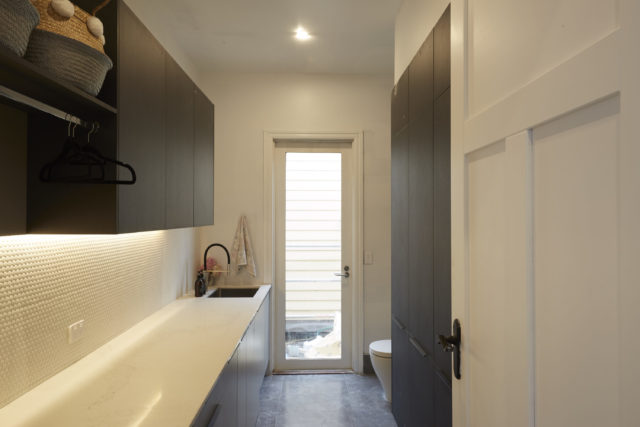 The laundry was received much more positively, Darren calling it: “Surprisingly fantastic.” The storage got big ticks, as did the benchtop, Caesarstone, tiles and colour palette. The judges liked that they had added a toilet, but criticised the lack of window treatment. Neale ended the judging by saying while the laundry had some nice touches, combined with the hallway they had a long way to go.

The judges immediately spotted it was unfinished. “If Ronnie and Georgia can’t finish, you know it’s bad,” said Shaynna. The hallway got praise for having drama, but Shaynna criticised the space for having Art Deco and Victorian period features: “Purists will have an issue with this.” The art got big applause, as did the linen cupboard and the separate powder room. “This is good, smart planning,” said Neale. 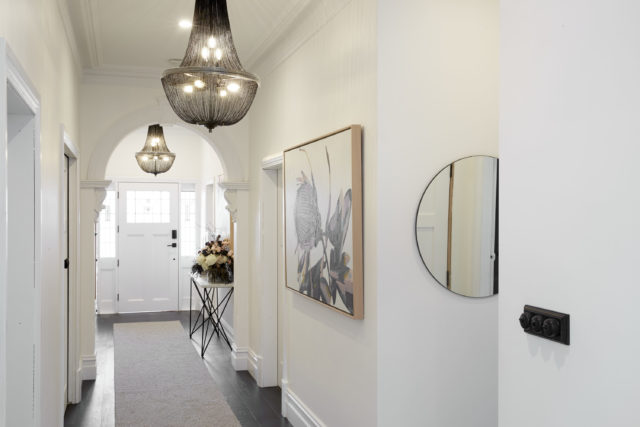 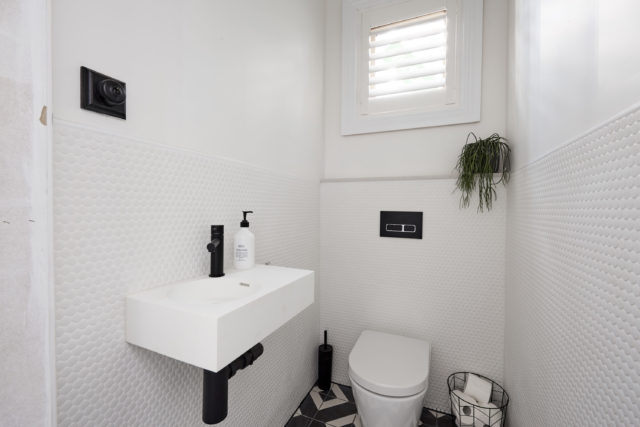 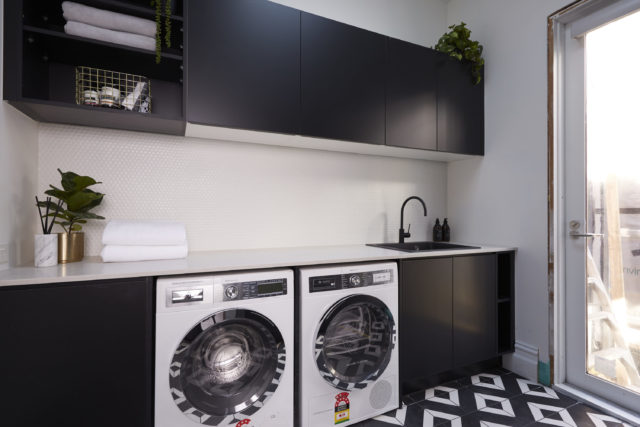 Finally the laundry, and the judges loved the skylight, benchtop and its spacious feel. But then some rookie errors were realised; the laundry lacked storage and the drying racks extended into the door. “I get the impression they were really rushing,” said Neale.

After some harsh criticism from the buyers’ advocates, this week Sticks and Wombat stepped it up in the styling stakes. And boy oh boy, they did well! The hallway was praised for being feminine and soft (something their rooms have lacked in the past). The judges loved the timber panelling on the walls and ceiling: “A masterstroke!” said Shaynna. The colour palette and separate toilet got big ticks, as did the execution, with their rooms being the first to be finished. 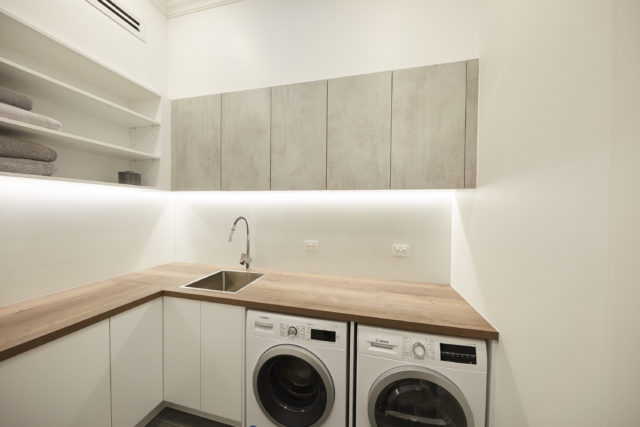 Into the laundry and the judges immediately spotted a remote control which revealed an attic ladder. “I love a gadget when it really works,” said Neale. The judges loved the storage, tiles and colour palette, with the only criticism being that the washing machine could be seen from the hallway (as the laundry had no door).

Our picks to buy: Sherren Comensoli Down Under Paper Print and Globewest Ascot Cross Console

The couple decided to create some major drama with nine-foot ceilings and it definitely paid off. “Get out of here,” said Neale. “This is a knockout,” agreed Shaynna. The judges loved the steel door at the end of the hallway which separated the original home from the extension. Styling got commended, as did the chandelier. “Throughout the history of The Block I can’t think of a hallway that’s ever had as big an impact on me as this one,” said Neale. 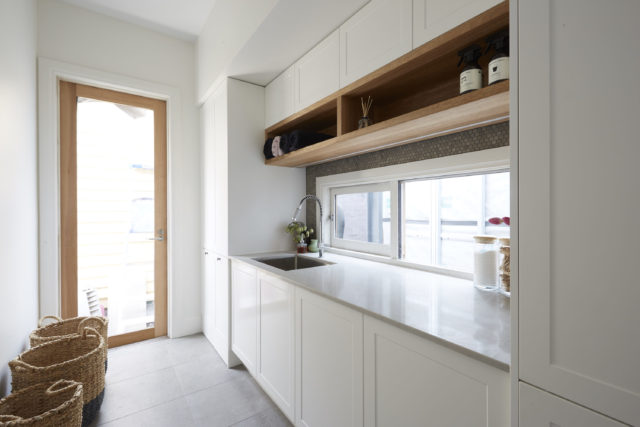 Next the laundry, which was praised for its panelling, tiles and drying room. However, the judges thought it needed more storage and criticised the fact they were the only home without an extra toilet. “Is this a triumph of style over substance?” asked Neale.