Some rooms are more challenging than others. Our master bedroom has been one of them. Big time! Where do I start?! Before we moved in, I hastily picked what I thought was a nice shade of navy from a colour chart as I wanted to get the whole house painted while it was still empty. The first time I saw the colour in real life, it was too late. It was terrible. I mean really bad. I’m talking daycare centre primary blue with a hint of peacock. I could have cried but, rather than admit how badly I, Interiors Addict, had failed, I attempted to live with it for a while and make it work. It did not. It’s also a really tricky shaped room to work with. It is long and rectangular with a window on the longest wall. The window is so wide and so low, you couldn’t have any bedhead in front of it, and I can’t live without a bedhead. I just can’t. So we had the bedhead against the shorter wall, meaning when you walked in, the side of the bed was directly in front of you, rather than the head of the bed. There must be something about that from a Feng Shui perspective, because I’ve had a bedroom where you didn’t walk in and see the bed facing you before and that also felt all wrong. 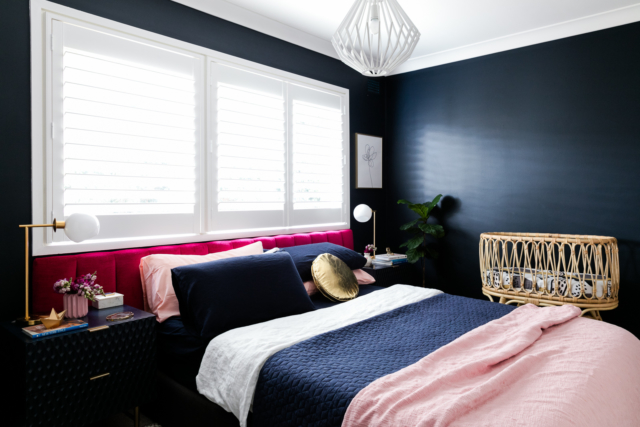 With wardrobes on wall three and the door to the en suite on wall four, I was out of options. That room did my head in so badly that we moved out, and into a different bedroom at the front of the house. With a four-bedroom house and one child at the time, we had options! But it meant we didn’t have the en suite which seemed a real shame.

We lived like this for a few months and eventually had the room (destined to be a guest room) painted the perfect shade of navy (Haymes Paint Stormy Blue). If we had to cover up that hideous bold blue, we might as well do it with a dark colour, right?! Then it hit me: if we had a bedhead custom made to fit under that big window, we could probably make it work. Enter: Heatherly Bedheads, who I had worked with before. I had no hesitation that their classic Lincoln design was the way to go, and had been loving the trend for extra-wide bedheads, so it made perfect sense to extend it to exactly the width of the window. When I saw they had a fuchsia velvet called Lipstick, it was like a sign. Regular readers will know I’m rarely seen without my signature bold lip! Damian took a little more convincing. I mean, who can blame him? When your wife tells you you’re getting an oversized pink velvet bedhead “and I promise it won’t look girly,” you have to wonder. Even I was a little anxious about my choice, but with such dark and moody walls and considering a lot of the bedhead would be covered by pillows and bedsides, it needed to pop. And pop it does! This bedhead is so bloody perfect, why would you ever think the bed wasn’t always destined to go under the window? If there was ever an argument for a custom bedhead, this is it! So we can now use our master bedroom as it was intended, we have the en suite and it’s one of my favourite rooms in the house. It took a while to get here, but boy, was it worth it!

Those of you who remember our wedding decor five years ago will know navy and fuchsia has been one of my favourite colour combos for a long time! And as for brass accents, well you can never have enough! It took a while to decide on art, and Damian was right when he said we needed something black and white to pop on the navy walls. When I discovered Secret Weapon Creative, the hardest part was choosing which of Bree’s prints to pick. I’m sure I’ll buy more for elsewhere in our home later. 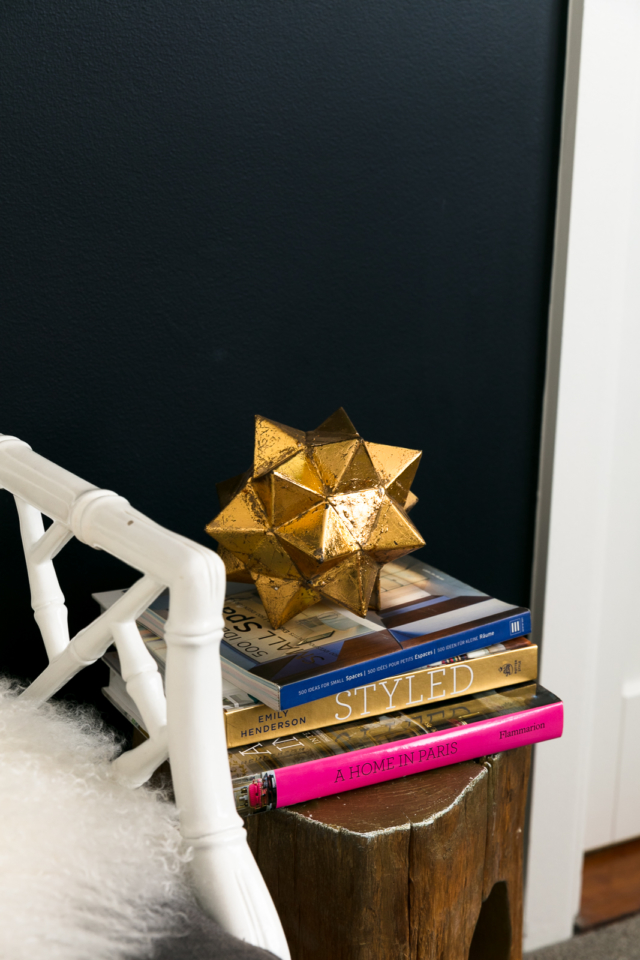 I’m delighted with this bedroom now. Our old apartment bedroom was a very hard one to beat. It was probably twice this size with amazing natural light and two windows. I resigned myself to never loving a bedroom as much, but this one’s so unique, so reflective of my taste, so bold and with the extra satisfaction that comes with making a challenging room work for us, I think I might just have proven myself wrong!

And, just for fun, here’s what it looked like as the previous owner was moving out… And here’s THAT blue that was so horribly wrong… 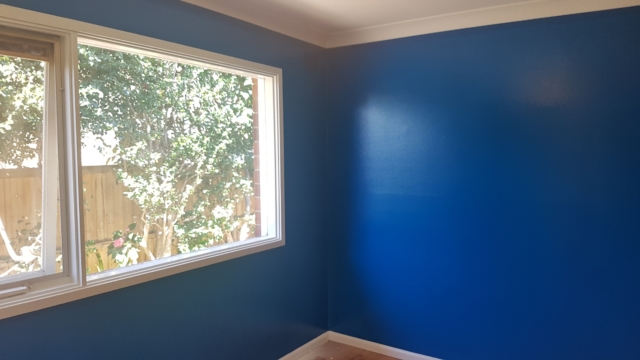 And for comparison, here it is next to the right navy… More of our home | Our kitchen | Charlie’s nursery