Kerrie and Spence wowed the judges with their perfect score kitchen, tricked up to the nines with with top-of-the-range Gaggenau appliances, a hidden rangehood, Sub Zero fridges, and a very impressive butler’s pantry. I thought it was a great space but would it have scored so highly without those appliances they won? And looks wise, it didn’t get me excited. It wasn’t a 30 out of 30 kitchen for me. The judges were way more enthused though! Darren said if it was his home he’d be pretty damn happy and Shaynna said: “this is out of town!” Darren loved the monolith island bench, which Shaynna said was “just hot!” 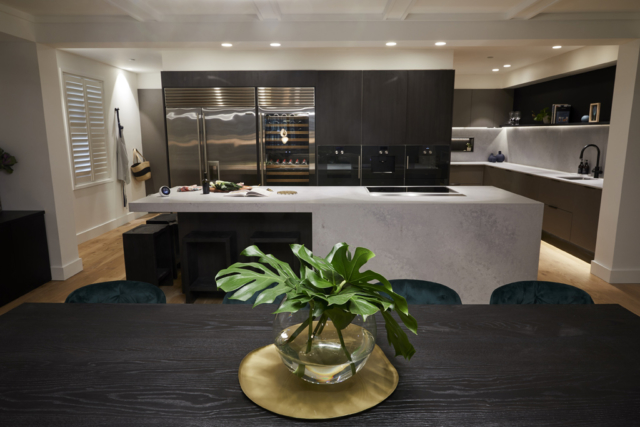 Neale said it ticked every single appliance box and he liked the integrated seating at end of the bench. The styling was called perfect and Shaynna said it was hard to fault anything. 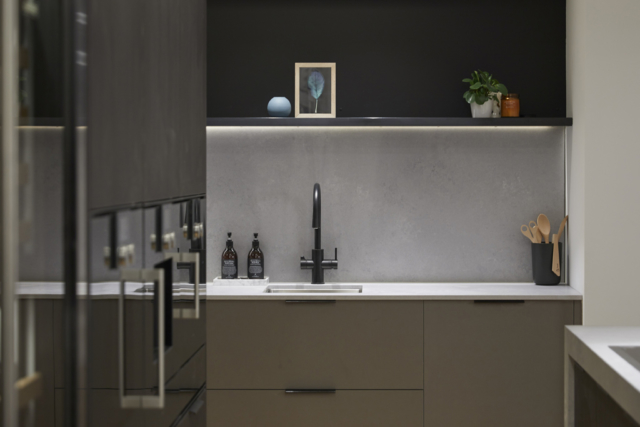 Neale said it was paradise for anyone who loved cooking.

I just didn’t love it at all. Equally, I couldn’t find anything too wrong with it. Just meh. To be totally fair though, I don’t think these photos do it justice and it looked much better on TV. I’m just not a fan of too much dark cabinetry and I found that, combined with all those in-your-face appliances, too heavy.

The judges loved Sara and Hayden’s black and white kitchen, which featured a large stone feature wall, black cabinetry, black wire stools, a bench seat — and  a fabulous hidden butler’s pantry (I think I liked that more than the actual kitchen; anyone else?!) 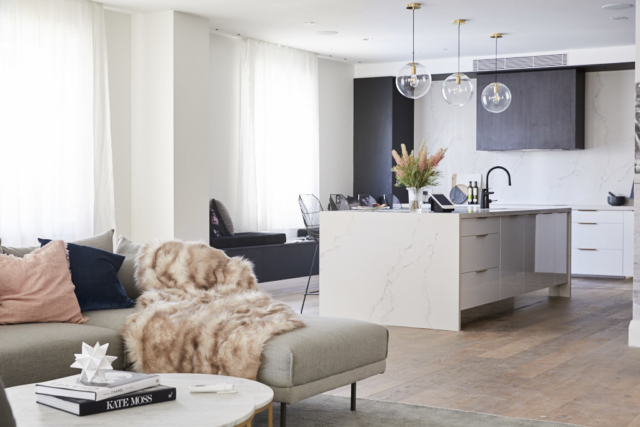 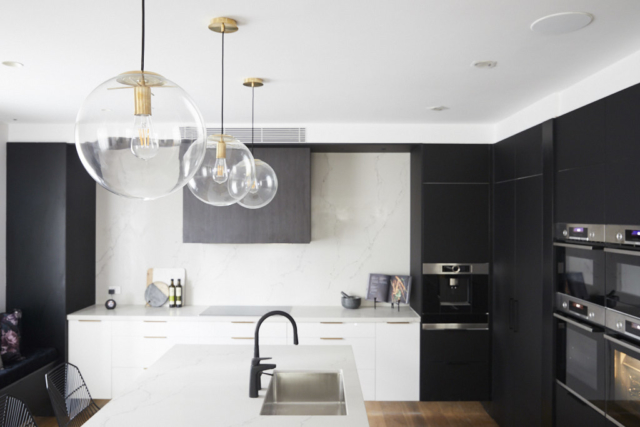 They were the only couple to flip their island bench so it faced the windows and the judges loved that. Darren said the rangehood was a design element, rather than an eyesore, which they often are. Neale said with the kitchen in place, the rest of the open plan area made more sense.

Shaynna thought the benchseat was quaint and gorgeous and called it a very elegant kitchen.

Darren thought the lighting schedule was terrific, loved the mirrored kickboards (me too!) and the four-seat dine-in island bench. Neale said it had a sense of generosity and meant business from an entertaining perspective. When cooking, you’d feel connected to your guests.

While they loved the butler’s pantry (seriously, it was better than the kitchen, wasn’t it?!) they thought the ‘hidden’ doors to it should have opened inwards. but overall the styling let them down.

Bianca and Carla impressed with their kitchen, which included floor to ceiling cabinets in dark and light grey, a timber study nook, statement lights, matte-finish bench top and an enormous butler’s pantry. 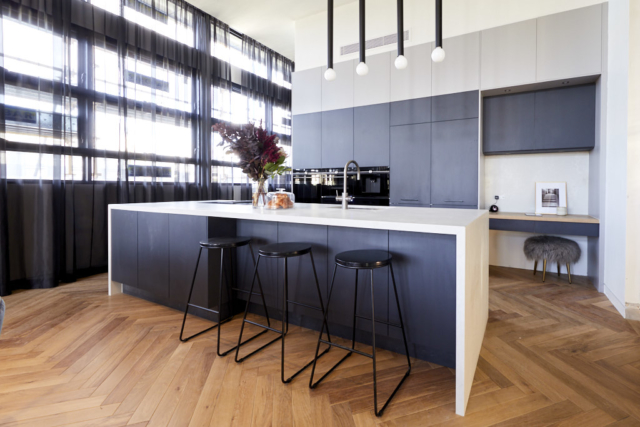 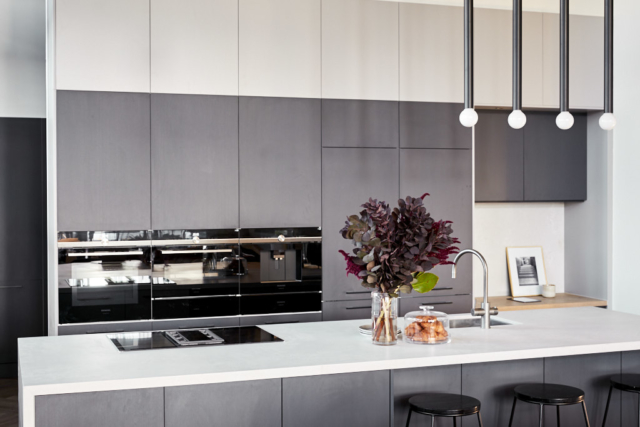 Darren of course loved the Caesarstone Cloudburst Concrete which he has in his house! Neale called the room sexy and sophsiticated and Shaynna said they’d nailed their market. With all this positive feedback I’m surprised they didn’t come second.

Neale liked the dedicated study nook but Darren said it was very low, as proven when he sat down at it! The lack of bin and dishwasher in the kitchen were big no-nos too.

They were praised for being consistent yet again and Shaynna said she straight away knows who the buyer is.

Norm and Jess impressed with their kitchen, producing what the judges called “one of the most beautiful kitchens ever produced on The Block.” But still only coming joint third. This was my favourite without a doubt. So feminine, soft and pretty, and much more classic than the others. You know I love a shaker-style cabinet too! 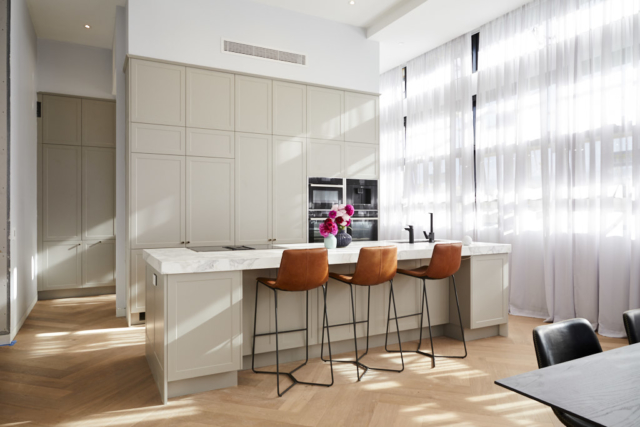 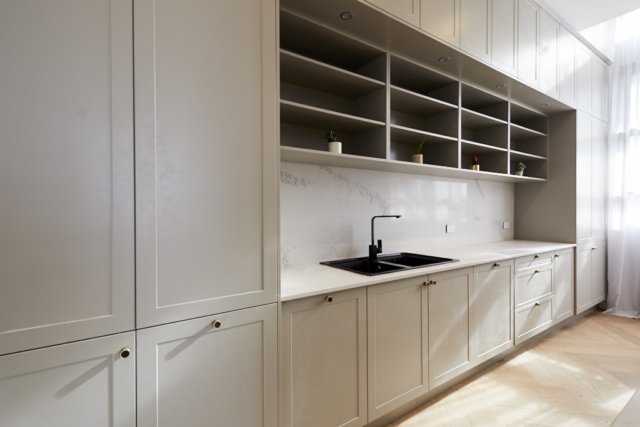 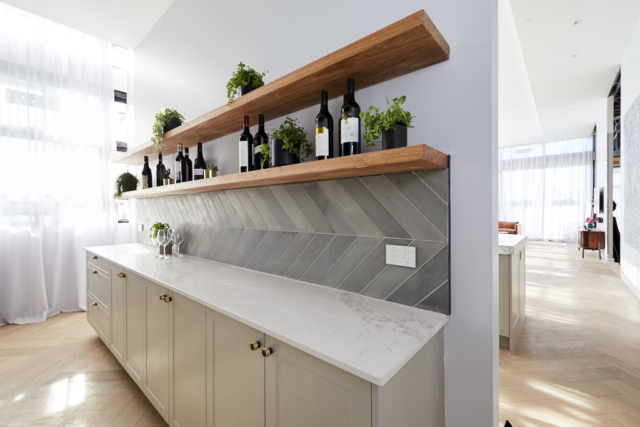 I loved the mix of textures like the tiled splash back, timber shelves and marble-look bench. And who could forget that state-of-the-art voice activated plumbing? Although I think I’d personally find it annoying! How hard is it to turn a tap on?!

It was a wow from gadget-loving Darren. Neale said it was beautiful and luxurious. Darren liked the layout and the fact you could get into the butler’s from either side. But he thought it could have been better with more space beside the sink.

Shaynna loved the appliances but said the sink shouldn’t have been directly opposite the oven.The out-of-season imported peonies also impressed her but didn’t stop her noticing the poor cutting in! And another missing bin!

Neale loved everything aesthetically, saying it was one of the most beautiful kitchens they’d ever seen on the show. But Darren said the functionality issues pulled a great kitchen undone.

They all agreed though that a lot of people would fall in love with it and Shaynna said it felt beautiful.

Courtney and Hans took a risk positioning their kitchen across the hall. They also decided to include a hidden butler’s pantry, effectively cutting their room in half. But despite this the couple still produced a great space, which featured stone benchtops and splashbacks and champagne-coloured metallic cabinetry, and matte black floor-to-ceiling cupboards. 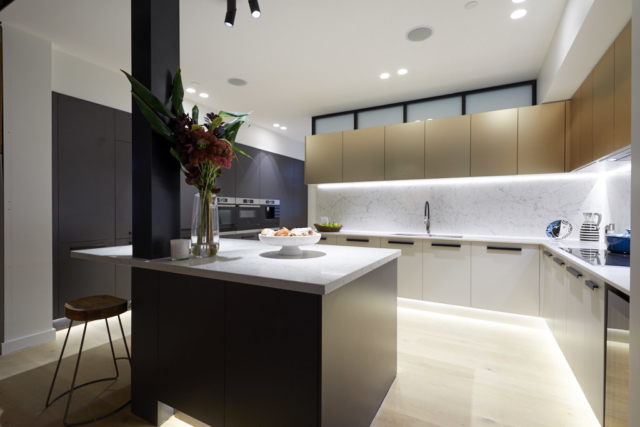 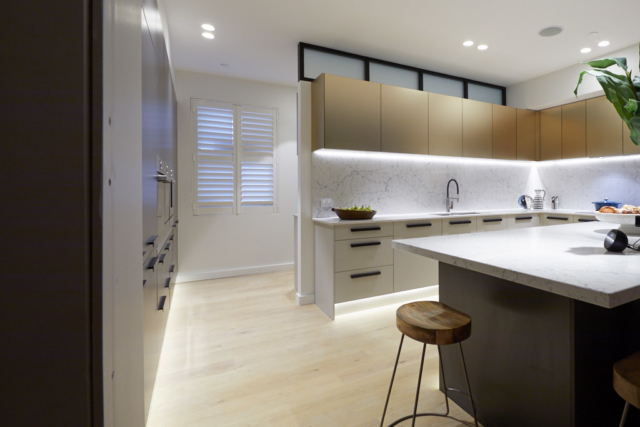 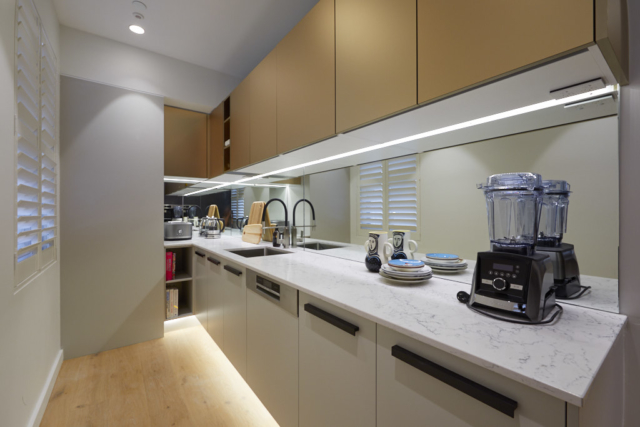 The judges didn’t love the layout and only two stools at the island. But Darren said it was the finishes that struck him as he walked in and he loved the stone and the metallic cabinets. The lighting was also very well designed.

Neale didn’t believe the layout would suit everyone and Shaynna asked did they need a butler’s pantry? It begs the question if this is essential these days or a passing phase? Personally, I think I’d rather have a bigger, more entertaining-friendly kitchen. I also think the metallic cabinets, although lovely, will date. And I really disliked the heavy black handles.

Neale said everything was nice stylistically. And Shaynna said you can’t fault its functionality. But Darren said it was an odd decision to lose natural light by putting windows behind the wall in the butler’s pantry.

Overall they thought the styling was gorgeous and it would photograph well. But it was up against four other kitchens that integrated better with their apartments and the comparisons would work against them.

So, what did you think of kitchen week? I was a little underwhelmed I must admit. Maybe they were all just a bit too St Kilda for my more classic taste!