Garages with full-wall murals and fancy doors, storage, home offices and wine storage! There was so much revealed last night on The Block, it’s no wonder even the most diligent contestants couldn’t finish it all perfectly! There were some amazing reveals and some very harsh words from the judges for those who just didn’t get it together (I’m looking at you, Josh and Luke!)! “There’s two words for this and one of them is cluster,” may just go down in history as my favourite judge’s comment ever (thanks Darren!).

Another week of praise for Ronnie and Georgia, who came first, and deservedly so.

Accessed by the Colourbond tilt door and past the Grafico mural of the Le Mans where Ford beat Ferrari, to a well-stocked and stacked storage area, Ronnie and Georgia’s garage combined style and functionality.

From there, the judges went through the stylish and perfectly placed mudroom with storage for shoes, coats and schoolbags, to a powder room (to be judged next week) and a study/guest room/home office overlooking the pool. “Trust Ronnie and Georgia to bring supreme elegance to a mudroom,” said Neale.

Inside however it was the sculptural curved staircase that caused the biggest wow, leading down to a beautifully fitted out wine room complete with seating around a butcher’s block table and another powder room. “Simply perfect!” Shaynna said. “Damn! Look at that!” said Darren. “That’s such a tight space and it’s so architecturally beautiful,” said Shaynna. “It feels exactly like the perfect staircase for this house. I love it!” Darren added.

The judges said the bedroom-slash-office was absolutely wonderful and what a beautiful place to sit and work. Darren said a fourth bedroom was huge for the real estate brochure as it was essentially a bonus room.

The judges said it wasn’t perfect but time was against them and they were sure any issues would be rectified later. Neale said: “They set the bar very high every week. The other contestants must hate them!”

With its custom pink mural and yellow car, Mitch and Mark’s garage was colourful but, as Neale said, take those two things away and there’s not much left.

But it leads to one of The Block’s biggest surprises, a hidden study/office fitted into “stolen space” above, the perfect work-from-home space with ample space for two, plus storage, a big selling point in post-Covid times.

Darren said it set their house apart from Ronnie and Georgia’s. Neale said it had proper storage and was a proper work from home space. Although there were finishing issues, Darren said he understood why.

Into the basement the judges were surprised again, this time to see the space next to the existing day spa steam-room had been transformed into a combined TV room and wine cellar with its own kitchenette.

Neale said he felt like he was in a very cramped bedsit. Shaynna said the wine storage felt like it was shoved into corner. Darren said the best thing was the kitchen joinery. Shaynna felt the layout was odd. Neale said it was a panic room where they’d try to cram everything into the last space. “Mitch and Mark are going to be bitterley disappointed with our comments but we have to be honest,” Neale added.

From the teal green horizontal garage door with portholes matching the heritage façade to the polished concrete floor and huge storage area, this is a room where functionality is clearly king. Coming at the cost of a fourth bedroom, the judges did wonder if the storage might be a mistake. Darren said they had damaged the value of their real estate.

Downstairs they found the games room outside the home cinema, complete with a wine fridge, classic arcade amusements and a statue welcoming visitors in. “It’s fun, it’s quirky and it’s in keeping with the house,” Darren said.

He really like the wine bar joinery and the integrated wine storage. “It shines a light on how much better this solution is to what Mitch and Mark showed us.”

Shaynna noticed the stairs and the rooms were very loud and echoey and a rug would help soften it. Neale said it could easily be remodelled by the buyer into a sophisticated adult space. He wasn’t sure if it added to the value as a games room and the way it was presented was very polarising.

The polished floor, mural featuring race tracks of the world and a door-within-a-door all combined to welcome the judges into Josh and Luke’s garage, a single car space with a storage space, complete with a plumbing stack from the master bedroom that was moved!

Inside, there was less to see, with the build still underway and the only visible change a plaster render the judges were all horrified by! The rooms were a complete tip and the judges were not impressed one bit.

“This is saying to me we don’t give a flying **** for what you guys have to say,” said an angry Neale. “This is inexcusable, it’s a pigsty,” added Darren.

The study/bedroom didn’t thrill them either, and they said it felt cramped, and the basement despite its great wine storage and kitchenette, was unfinished again and full of problems.

“What is this space, what is it for?” Darren asked. “A doctor’s waiting room?” asked Shaynna. The terribly planned en suite was an absolute disaster. “There’s two words for this and one of them is cluster,” said Darren. “That bathroom needs to go. It’s a waste of real estate. It’s a planning disaster.”

Shaynna asked why you’d have carpet in a wine area. And why there wasn’t a fridge? “Nothing functions, it’s kind of useless,” said Neale. Darren said it felt like defeat. “I sort of feel like we’re in this festering pit of negativity in here,” ended Shaynna.

Thank goodness things were looking up at Kirsty and Jesse’s, starting with that gorgeous Hamptons style garage door! The large uncluttered garage with a storage area and fridge impressed the judges.

They found a lot to like in Kirsty and Jesse’s final spaces, especially when they moved upstairs to the study. A functional home office with well-planned lighting and great cabinetry. Darren said it suited the house.

It was the basement, however that won them over, from the bank of Gaggenau wine fridges to the recessed guitar display niches and kitchenette with seating outside the home cinema. “It’s a knockout!” Darren summed up. “A balance between opulence and value.” He said they’d spent only where they needed to.

Neale said there was no sign of them throwing in the towel. Shyanna said they had four bedrooms and an actual study. “It ticks a really important box from a real estate point of view.” Neale said he loved the basement vibe and it felt like a recoding studio.

See all the rooms and more at The Block Shop 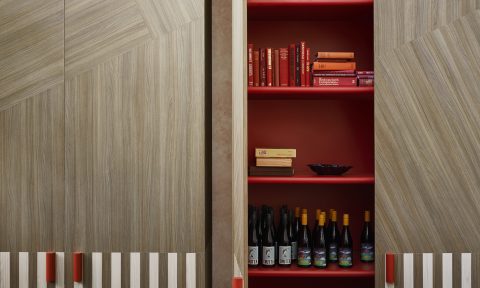 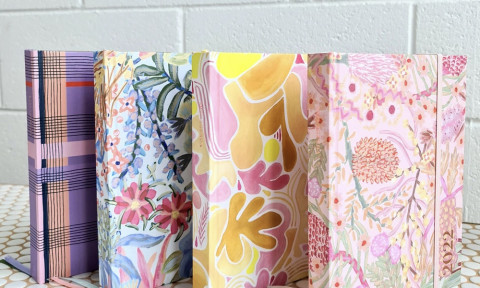 2022 planners: The best looking diaries for next year 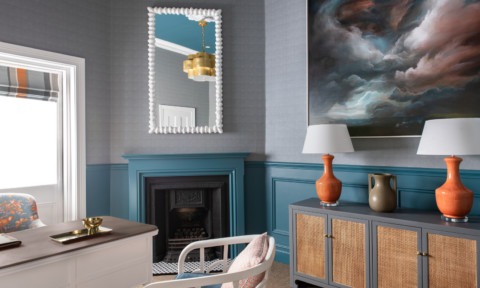 Decorating with clashing prints and colour: home given fresh look 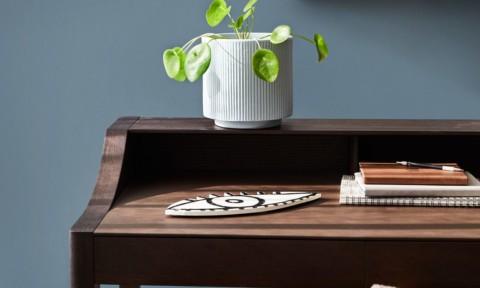 Paint: the cheaper, easier way to refresh your home office 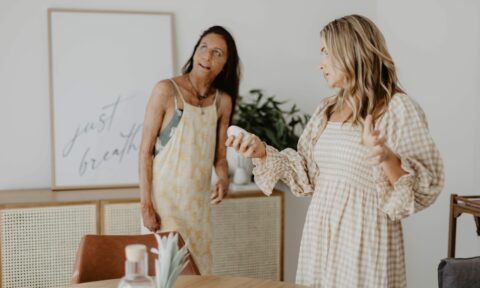 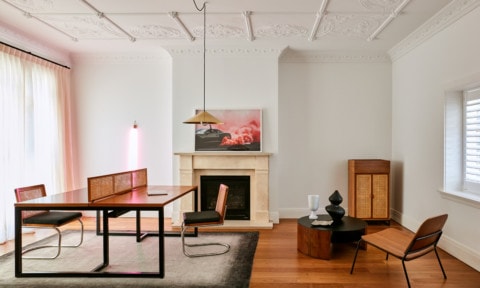 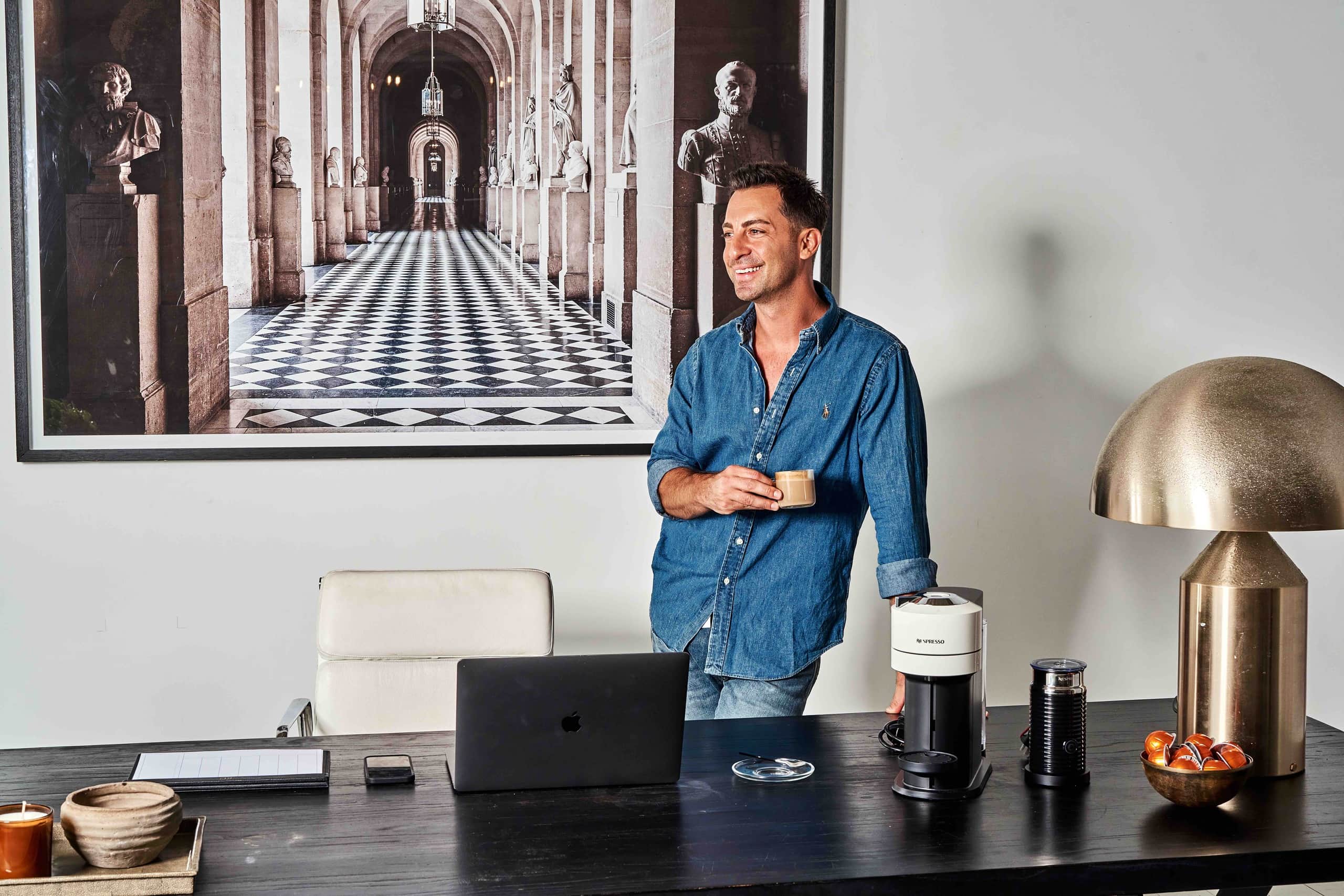