As promised in yesterday’s playroom reveal post, today I’m giving you a closer look at exactly what we used to get the storage sorted and why it works so well. It really is a storage dream now! 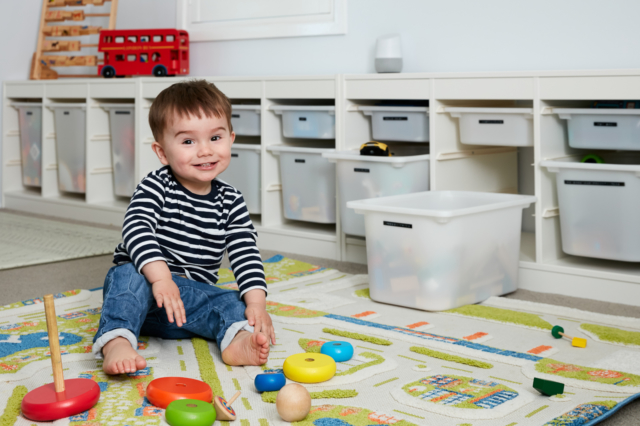 The heroes of this room are the IKEA TROFAST units. We have used both the regular version and the wall-mounted version. I opted for all-white units and all-white plastic boxes you buy separately, but there are many combinations, colours and options available. 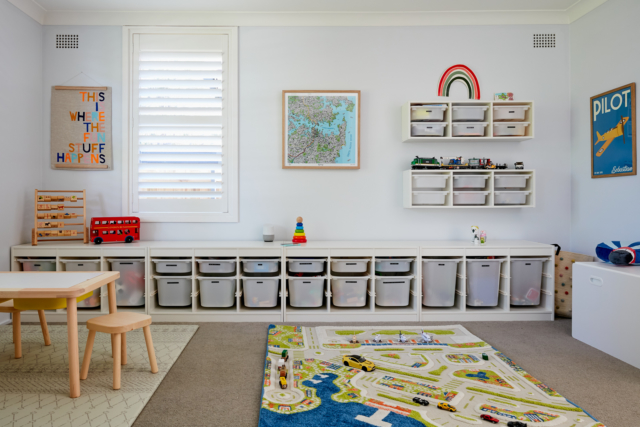 The units themselves come in either white (like ours), black or light stained solid pine. I like the look of the pine ones too, but ultimately, the white version was more suited to our home. Because I knew there’d be plenty of colour from toys, rugs and art, I also wanted to keep the base as simple as possible to avoid it being too visually busy. There are several shapes and sizes of TROFAST units available so it’s a very flexible system. 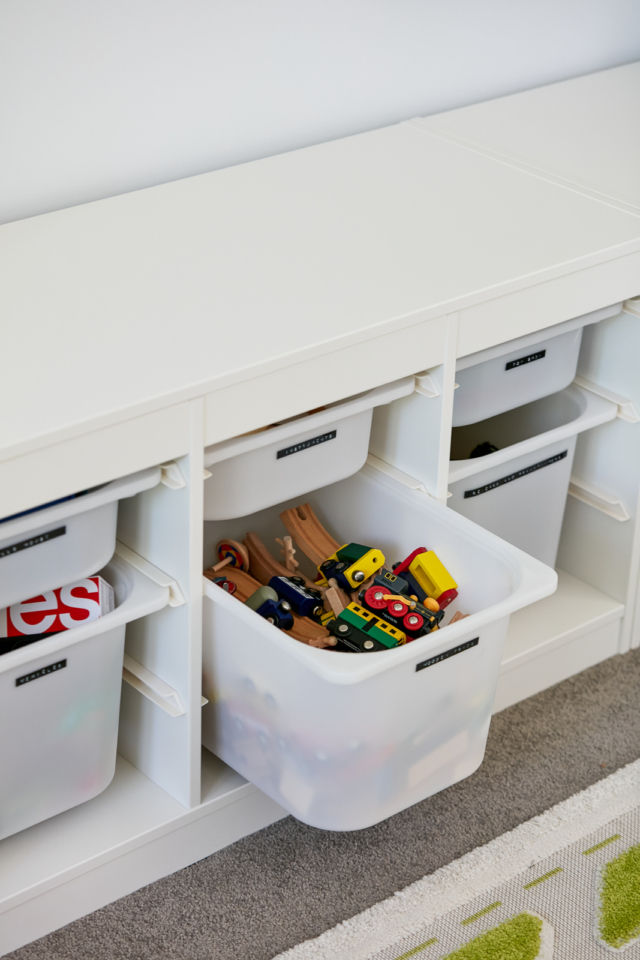 The boxes (or drawers) are plastic and come in loads of colourful options but again, I knew there’d be enough colour from everything else and I’m still glad I chose all-white. They come in three different sizes. All the units come with the same plastic guide rails (or drawer runners) and the beauty is that you can choose which size boxes work for you. You’ll see we have got some with three large boxes each and some with three medium and three small boxes each. Should your storage needs change later, you can simply go and buy different boxes (from $4). Or you can change colours for a completely different look. I took great satisfaction in using a DYMO labeller to dictate what each one was for! This makes packing away so much easier and quicker! 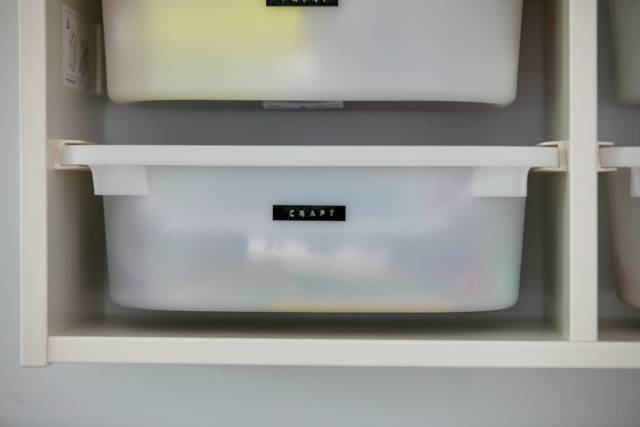 I am IN LOVE with these affordable units ($126 each in this combination including the boxes). The plastic boxes are hardy and they’re easy for the boys to pull out (and for Sebastian, if not Charlie, to put back in). You can bring the box to the toys, which makes tidying up a lot quicker than if you were having to take all the toys (knowing kids, one by painfully slow one) to a fixed drawer. The units are hardy (they’ve already been given a workout by the boys, who aren’t the most graceful) and I can confirm that colouring pencil wipes off the top with Windex. They’re at just the right height for the kids to be able to put their own stuff away (sometimes!) and to also play with toys on the top of them. I’ve started leaving different toys out on the top every day to invite them to play with them. 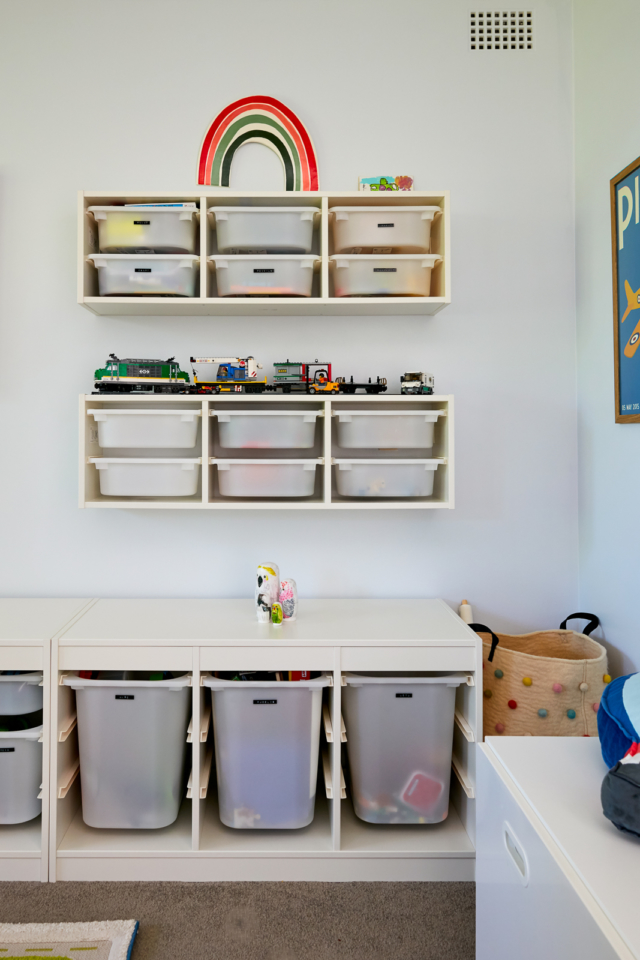 You’ll see we have also used two of the wall-mounted versions of the TROFAST and this is to keep things out of Charlie’s reach, specifically paint, craft supplies and Lego! As an added bonus, we can display some of Sebastian’s favourite Lego trains rather than have to hide them all away. 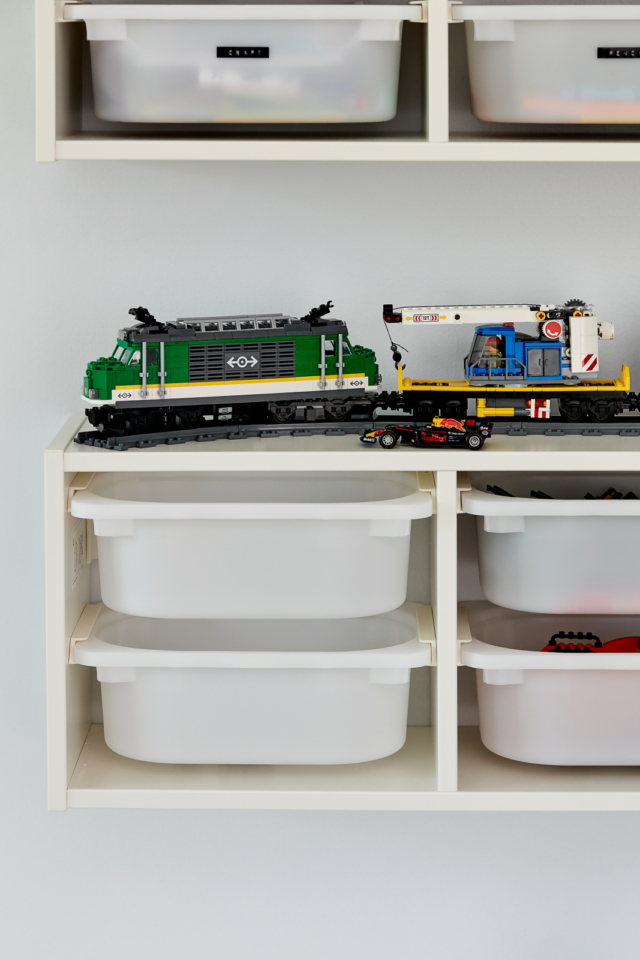 We chose to put books up high in the FLISAT shelves (which look so lovely in solid timber) because Charlie has zero respect (yet boundless enthusiasm) for books and they were all getting ripped and scribbled on! It’s great that they’re still facing cover-out and easy to pick from. And they’re nice decoration as an added bonus. We store Charlie’s less vulnerable board books in the play kitchen (from Pottery Barn Kids). 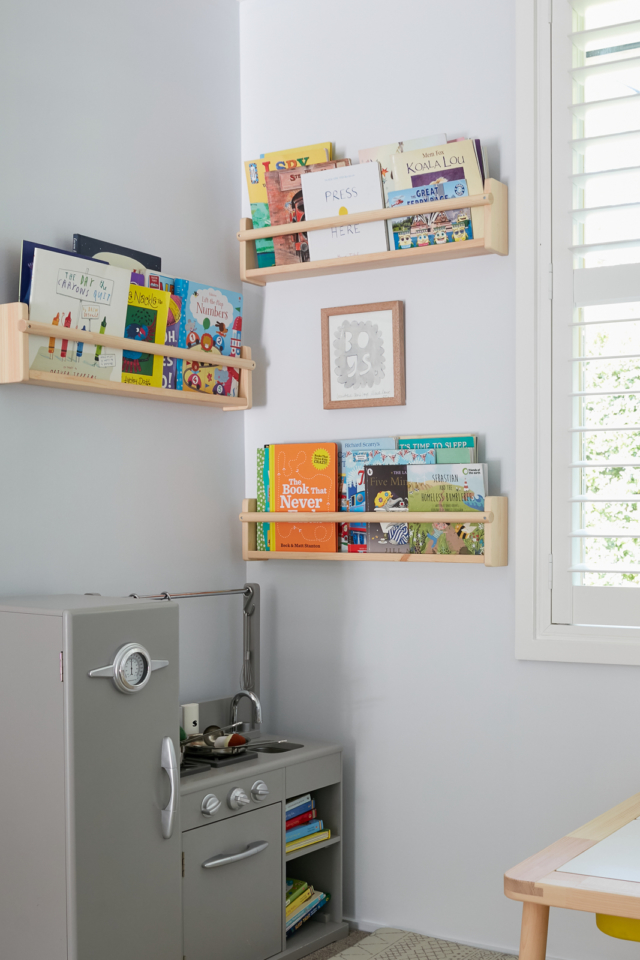 IKEA have a great range of kids’ tables and chairs and the FLISAT table and stools appealed firstly for their aesthetics, and then for the table’s extra (and fun) storage inside. Underneath we have the wipe-clean Grace & Maggie Baby Driver Boho memory foam mat, which is reversible and has a road on the flip side. This means they can eat at this table or sit on the mat having a snack. 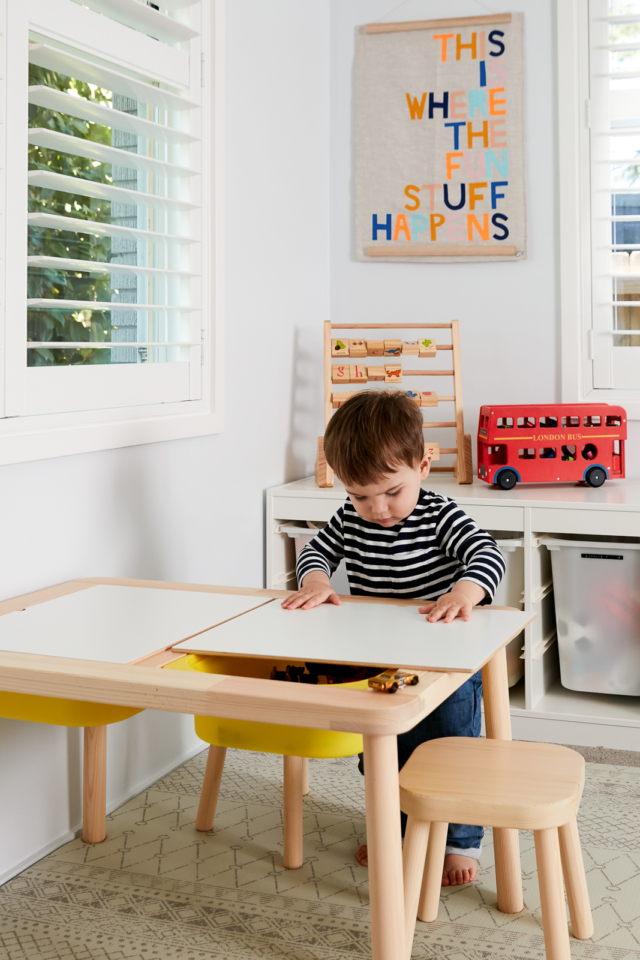 One mat is never enough for kids, and our other favourite is this incredible IVI Interactive Play Rug from Urban Baby. The boys have not stopped driving cars around it, creating airports and mini cities, since we got it. 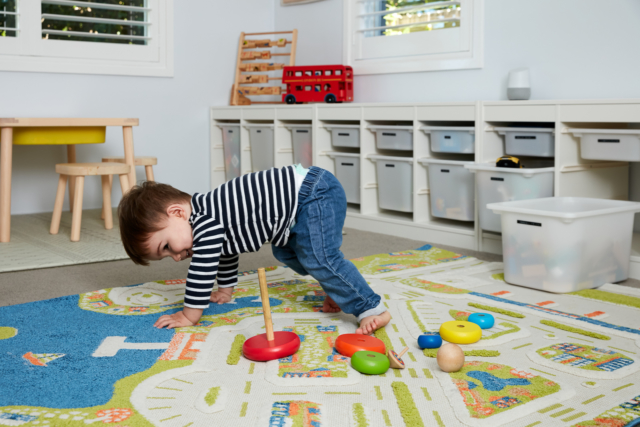 Something we always had trouble with hiding (I mean storing!) were our extra large vehicles (think Tonka garbage trucks!) and I found a great solution for these in the STUVA/FRITIDS bench. The drawer part is on castors and pulls out really easily and safely for the kids. 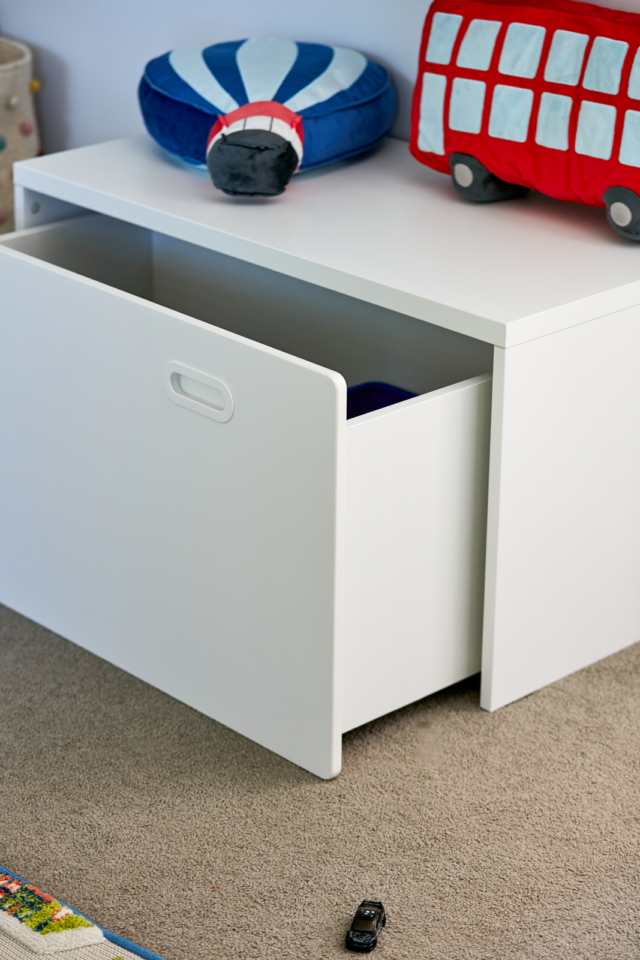 Both our boys love music, and telling Google what songs to play (via Spotify) so we love our new SYMFONISK WiFi speaker (a collab between IKEA and Sonos) which is wall-mounted below their TV. It’s also designed to sit neatly on a bookshelf without the bracket, or you can even mount it by your bedside and use it as somewhere to pop your book, glasses and other essentials! I love this kind of smart and practical design and it’s a great price too, from $149 (also comes in black). 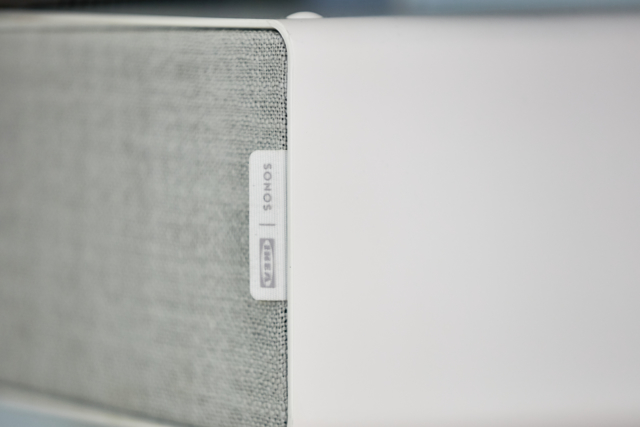 So, that’;s my roundup of the main elements in this room and why they work so well for us. I hope you found it useful if you’re struggling with toy storage too.

Our new top tip for flatpack assembly without risk of divorce is to get an Allen key attachment (also known as hex bit) for your drill. SO MUCH QUICKER. You’re welcome!

If you have any questions about any of the products in our playroom, please drop a question in the comments below!

Disclosure: Items in this post were gifted by IKEA.