In partnership with Latitude Financial Services

As regular readers will know, we have been doing up our “nanna house” (so named after the lady who lived here for 30 years before us and whose decor was decidedly, well, nanna!) since April. While this house was well loved and looked after, it was added to over the years, many times, and this left it with a look which was often more patchwork quilt than consistent!

The best (worst) example of this was the flooring. We had dark (red-toned) parquetry in the entry, living room and front bedroom, cork in the playroom and dining room and pine boards in the hallway and other three bedrooms. And then of course tiles in the bathrooms. Not only did it ruin the flow of the house aesthetically but it really made it clear where the first of two extensions had happened. I was desperate for the house to feel like one consistent home.

I’m not against parquetry per se, it can be beautiful. And this wasn’t exactly offensive, but it had been faded by light over the years, and it was really obvious where a huge rug had been because of a change in colour. Not to mention dull patches and scratches. If we’d had the same parquetry throughout I’m sure I would have attempted to have it sanded back and re-stained lighter if possible. But as we were really only talking about a quarter of the house, and it still wouldn’t match the rest, it wasn’t really going to achieve our goal.

We carpeted three of the bedrooms (the fourth is my office and has a door to the garden so I didn’t want to carpet that) and the playroom as soon as we moved in.

So, I had to decide what kind of flooring and then which brand and colour, and it is a big decision which really affects the look of your home massively. No pressure!

Once we painted the living room, added shutters and wall-mounted shelving, new lighting and our own furniture, and replaced the doors between it and the playroom, it was one of the easiest rooms to finish. But the floor just never quite worked with everything else and really dated the room. It’s not the brightest room (the best light is in the kitchen and dining room) and the dark floor really didn’t help. We knew we needed something lighter and more modern. 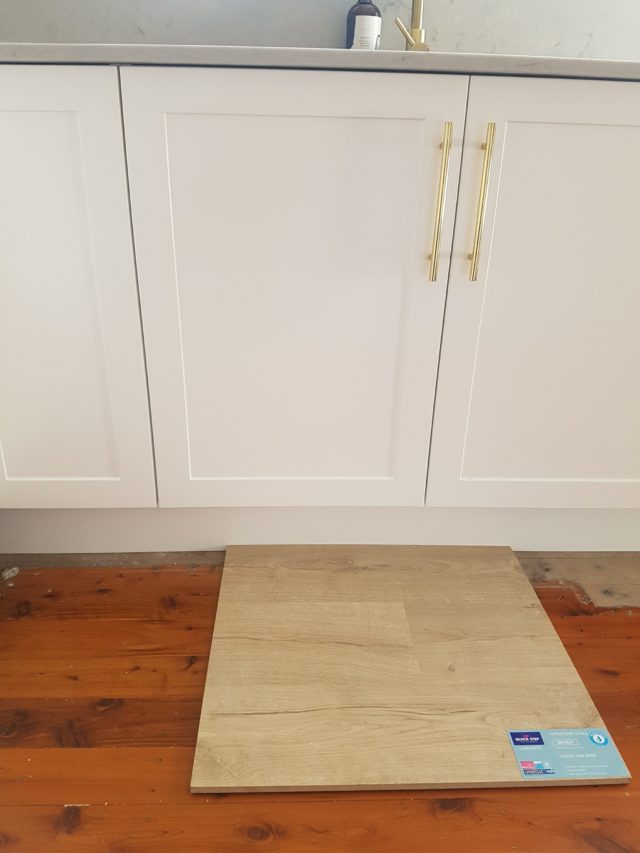 Another thing that really bugged me was the lack of proper skirting in most of the house. There was a mismatch of scotias of different colours. Oh, how I longed for plain white skirting boards!

So, it was time to decide on what kind of floor, which brand and which colour; decisions not to be taken lightly. In this house, I was choosing between laminate and vinyl plank flooring. I must admit, I found the differences between the two quite confusing, and I kept hearing that the difference in quality and price wasn’t that big these days, and it was more a case of what kind of floor you wanted/needed.

Laminate flooring is a layered floor built around a watertight, glued High Density Fibre (HDF) board. Luxury vinyl flooring consists of several layers. This not only results in a waterproof floor with sound-reducing properties, it also gives your feet a very warm and soft surface to walk on.

But there is a new generation of laminate flooring that is super durable, and as a mum of a toddler who rides a trike around the house, this appealed! I landed on the Quickstep Impressive Ultra product for several reasons. The first was the look (no surprises there!) because it is so like timber, it feels like timber and it has a great matte finish (Because everyone assumes they now have to take their shoes off on our new floors, our friends have all been commenting on how nice and timber-like it feels underfoot!). I also knew the brand by reputation as high quality and I believe in doing things well and doing them once! I think this is an important point because there are much cheaper products out there but they are not going to last you. Replacing a floor is a major hassle so I don’t want to do it again in a few years. This flooring comes with a very reassuring 25-year warranty!

I liked several of the colours but I loved classic oak beige. It was perfect! Secondly, it’s waterproof, which means it can even be used in bathrooms. And it means if the dishwasher leaks, no drama! Likewise should Seb have the odd accident when we get to toilet training…

I love solid timber floors too but the durability and water resistance of this kind of laminate really made it the winner for me. It’s also cheaper than solid timber, easier to clean and less likely to scratch. And, if you’re interested, it’s compatible with underfloor heating. 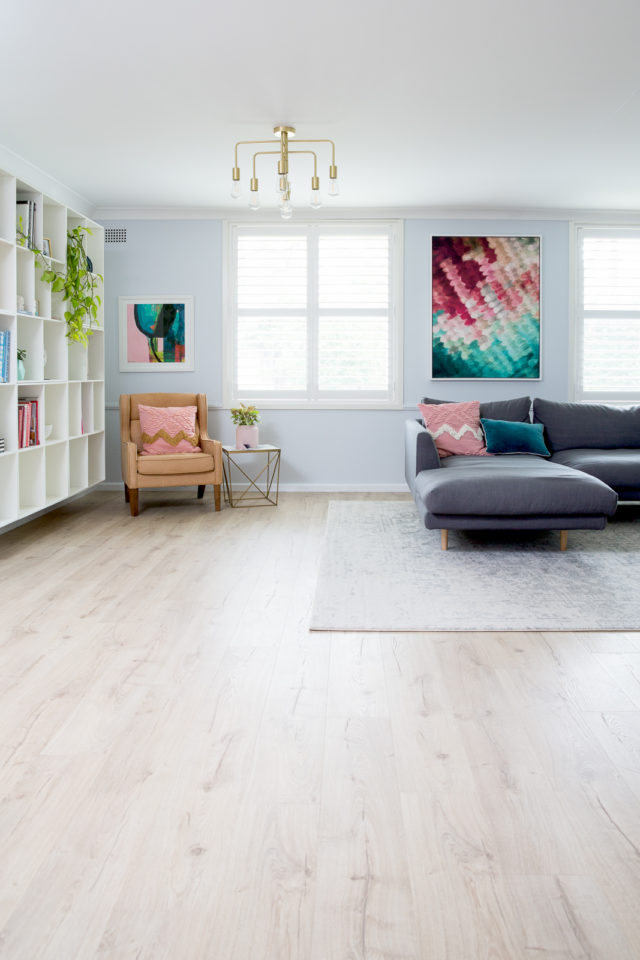 I could not be more thrilled with or proud of our new floors. I keep saying I don’t need a Christmas present this year because these floors and my new kitchen have been such a dream to get finished!

Actually getting the floors in was no mean feat and it took four days because there were so many different levels in the house, caused by not only the differences between the different original floorings (which we went over the top of) but also the fact the house shifted many years ago (it’s ok, the structural engineer says it’s sound!). The hallway in particular had a quite obvious slope to it. And even in the living room, which we thought was quite level, some parts were 2.5cm lower than others! This called for a lot of Ardit levelling compound. That stuff ended up having to go everywhere and I did question my decision to not move out during the process! But we managed! After the Ardit, a Quickstep underlay went down and let me tell you, these floors are so much quieter then the old ones and feel solid underfoot.

So, while you can click these floors together yourself, if you have a wonky house like mine or you aren’t confident, I’d recommend you call in the professional flooring experts. Your local Quickstep stockist would be able to help you. Despite the utter chaos of furniture being piled up in unaffected rooms and having to live around the install, it wasn’t actually stressful because the guys doing the job knew exactly what they were doing and had a solution for every curve ball my wonky house threw at them. And there were many!

The house looks so much fresher, brighter and lighter and the best thing about the new floors (and our new white skirting) is they’ve pulled the house together and made it feel like one cohesive whole! This was exactly what I wanted to achieve and I’m not exaggerating when I say the results have actually exceeded my expectations.

In summary, I think laminate has come a really long way. It’s no longer the shiny-looking, cheaper option you may have known in the past. For families, its durability and water resistance are perfect and as appealing as the lower cost (compared to timber).

For more information about Quick-Step.

All posts about Jen’s reno

More on why I chose Quick-Step Impressive Ultra.

Want to get your own reno plans happening? Speak to our partners at Latitude Financial Services about your finance options.

Considered sales finance for your reno? Find out more in this video with Jess Aloi from Latitude Financial Services and I:

After photos by Jacqui Turk