With three areas to cover, this was the biggest reveal of the series so far and it was clearly too much to handle for many of the contestants as ‘unfinished’ would be the best way to describe most of the rooms. It wasn’t surprising to see plenty of tough love from the judges.

Unsurprisingly, Karlie and Will’s entry took out first place this week. One of the few couples to actually complete their rooms, they really nailed the powder room in particular. From the white geometric tiles to the pendant light with wooden beads, I loved it and so did Shaynna who thought the space “felt so expensive that you’d want to hang out in there all day.”

Neale called all three rooms “elegant” and praised their “broad appeal” and he also said they were “sophisticated and on target for potential buyers.”

Seven weeks in and with two room wins under their belt, this week was pretty disappointing for Dan and Carleen who (for the second time) failed to deliver completed rooms. The floor height problem was blamed for most of the setbacks but the judges went to town on what was completed. Shaynna called their hallway a “generic, hotel space” while Darren thought that none of it fitted with the sophistication of the apartment’s lounge room. Dan himself called it a “monumental disaster” that saw the couple finish with a score of 11 – the lowest score this season and one of the lowest in the history of the show.

With very little money left, Andy and Ben were up against it this week and ended up delivering three spaces that Neale described as “horrible, undercooked and not fit for a luxury apartment.”

Shaynna called the styling “cheap and nasty” but she and Neale both liked the green cupboard fronts in the laundry. Darren thought the vertical timber detail in the powder room was “weird” and said it made him feel like the room was closing in on him. 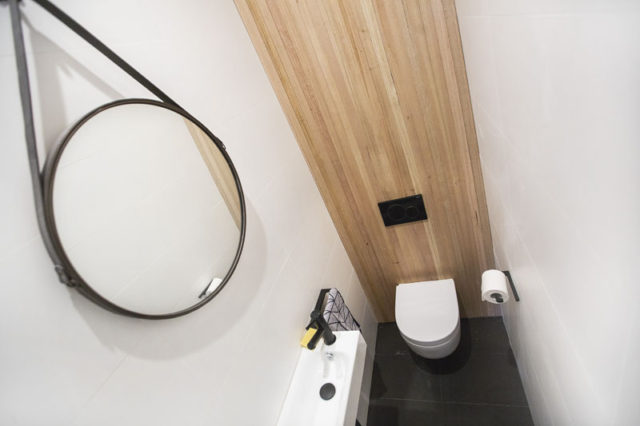 Our pick: Round mirror

Given how beautiful these spaces were shaping up to be, it’s a shame that Julia and Sasha’s rooms were incomplete. When Darren walked in and declared his disappointment, it was hard not to agree. The girls thought, erroneously, that the hallway walls weren’t parallel and thus created what Darren described as an “imaginary issue.”  In contrast, Shaynna heaped praise on them as she loved the panelling, cornicing and lighting in the hallway.

Shaynna thought the girls’ powder room, a gorgeous combination of marble and brass, was “stunning” and I agreed – I loved the penny round tiles en masse.

Neale said that if the girls had completed their rooms they would have scored really well and had “a good chance of being right up the top of the ladder.” Darren summed it up succinctly when he said “why run a marathon and stop a metre from the finish line?”

Kim and Chris abandoned the plush bedroom style of last week and went for something more contemporary and while Shaynna thought the spaces had “good bones” she felt they needed to be completely restyled. She even went so far as to remove an accessory!

All of the judges disliked the laundry and powder room – mainly for the cold, concrete tiles that led both spaces to be described as “concrete bunkers.” Darren even went so far as to call the powder room a “jail cell’ while Neale thought it “felt like a public toilet.” Ouch!