What excellent viewing last night was! A return to my favourite Sunday night Block room reveals and not three but SIX with three by the newbies and three by the returning all-star couples. Plenty of emotion (mainly from a tearful Bec, bless her) and some honest judging that spanned from downright harsh through to glowing. This is what reality TV’s all about!

Judges Darren Palmer (we love his new specs!) and Neale Whitaker were joined by real estate guru John McGrath for the big task this week. The winners of the newbie round were my current faves Ayden & Jess and Bec & George and Matt & Kim went home, despite producing great rooms, while Darren & Dee got to stay and become the fourth couple.

First, to the newbies. The judges didn’t think any of their rooms were really good enough. The judging was pretty harsh but, in my opinion, warranted. It’s early days though!

Charlotte spent up big at Coco Republic but expensive furniture was not enough. Darren said there was a lot of stuff in the room and loved the wall finish, the simple linen and smart choice of flooring. The bedside is one of his favourite pieces out there at the moment but he felt it too big for the room. Neale had an issue with the art, even though it referenced the neighbourhood (too young and poppy to go with the furniture). The art jarred with the neutral look and feel. John agreed the decor didn’t quite work. Darren and John hated the built-in doors and handles (a bit dated). No more Mr Nice Guy with Darren tonight who said the window dressing was a bit asylum-y. Eek! Neale said their elimination challenge rooms were better and he was disappointed. John said it seemed they hadn’t realised the competition had started. Ouch all round! 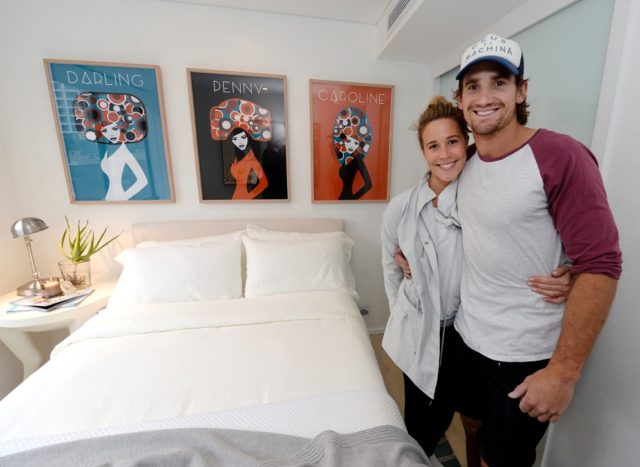 Our pick to buy: The go-with-everything Azure bedhead from Forty Winks.

The automatic blind impressed Darren and John who said it was what buyers in this market were looking for. Not surprisingly, the judges spotted the hideous toy cat on the windowsill (why?!) and they were NOT impressed. Neale said he felt he’d seen everything in the room many times over and called it generic. John said it felt decorated out of a seaside gift store. Cringe! Neale was again disappointed. John found the crosses theme “annoying” and said the room was not all things to all people and rather nothing to no one. At this point, Darren declared himself definitely cranky Daz! Distinctly awkward! 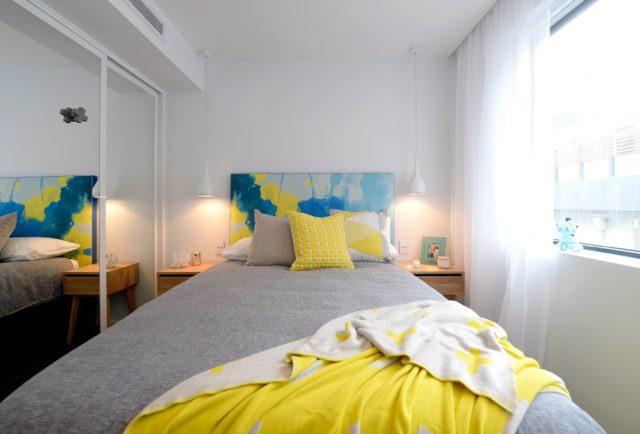 Our pick to buy: Karpenter bedside table by Curious Grace.

Ayden & Jess (first place — by half a point)

Ayden and Jess’ dynamic continued to make me giggle this week. They’re definitely my favourites to watch. Darren said the room was off to a good start. Neale said it had soul to it and personality. They all liked the wing-backed bedhead and even Darren said there were too many cushions on the bed (nine!) and he didn’t love the pendants. Darren said the flooring was a little plasticky. Neale concluded it wasn’t perfect but had a sense of creativity and flair. Darren said they had shown a fighting spirit and tried to up the ante. 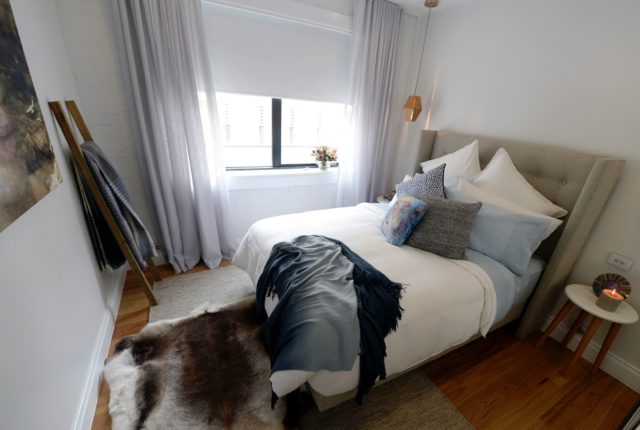 Then onto the all-stars… The judges were not told who did each room or even which all-stars they were judging. It seemed so mean that two of the three had to go home when they all did so so well and in a class above the newbies (and let’s face it, they’ve had a lot more experience). I picked the winners straight off though: Dee and Darren. But wow, they were all good! Painful!

Darren immediately said “we’ve stepped into a whole different level of the game. There is no comparison to the rooms we’ve just been in”. John said it proved a great idea was all about execution not budget. Neale said the room said experience and it was in a different league. The flooring was amazing. Neale said the artwork was stunning. Darren loved the warmth of the timber and the lights. Neale said it said modern luxury. John said it spoke to the market. All the judges like the custom gold leaf plant holder.  Bec was so wowed by the positive comments that she cried, saying even if they didn’t stay they’d achieved everything they wanted to. Which was just as well as sadly, they did end up going home. 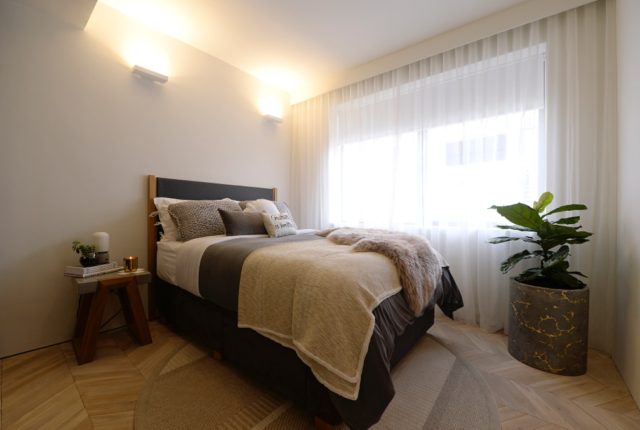 Our pick to buy: Chunky knitt cushion from The Home Journal and Creativity is Limitless cushion from Created By Boys.

This pair really seemed to take the opportunity seriously too, making brave choices. I loved their paneling and elegant choices. The judges were wowed by the different aesthetic and approach. Neale thought it felt very romantic and elegant. He said the detailing was very special. Darren liked the timber floor on a diagonal. They said it was a room that would appeal to anyone with design savvy. Darren said it felt like a jewellery box to him and that when the newbies walked through these all-star apartments they would freak out! Darren said whoever went home, it was a big shame. 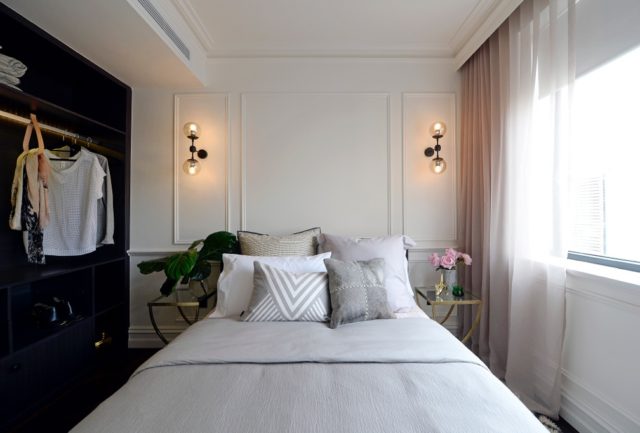 Our pick to buy: Limited edition photographs by Sarah Stockman.

Dee & Darren (winners by one point!)

Darren said the apartment was beautiful and he loved the grasscloth wallpaper. Neale said it was seamless, calm and relaxing and this was the room he felt like unpacking his bag in. Darren said it was the first bedhead he’d seen that he really wanted to sleep in. John said it was neither harsh contemporary nor classical and steered a nice road down the middle. Darren loved the dropped ceiling and the shadow line (Daz’s choice, which wasn’t popular with Dee!) and said they looked expensive. Less is more definitely won! 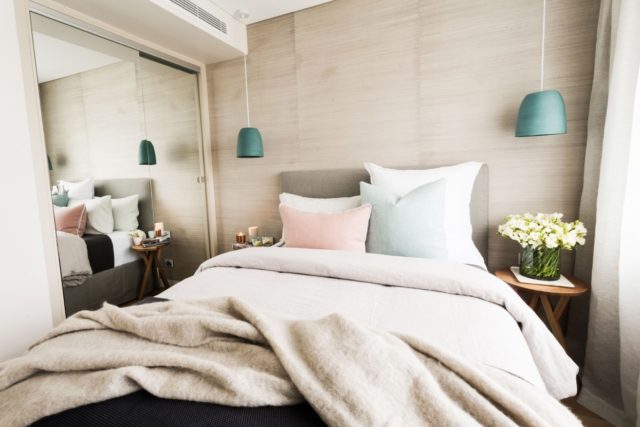 I have to say I agreed with pretty much all of the judges’ comments this week. All three all-star couples did brilliantly. I was most surprised and impressed by Matt and Kim in a way, taking into account their attention to detail, effort and the huge difference to anything of theirs we have seen before. The paneling was fab and the lighting was perfect. Winners Dee and Darren had my favourite room but Bec and George’s was also great (that floor worked much better then I predicted).

[contextly_sidebar id=”LLyvoP3LOeooSBEuodjPlUTbe7JzgC62″]It seems pretty unfair that the newbies’ work had to be compared to the more experienced former contestants’ this week as they were never ever going to match up! I really didn’t vibe Tim and Anastasia’s room at all and the soft toy dog they left on the windowsill killed me (I don’t care if it was your neighbours’ kid’s! What were you thinking?!). A tacky toy on the windowsill of what is supposed to be a high-end apartment is never going to go unnoticed or go down well. I found the colour scheme a bit jarring and the styling uninspired. As the judges said, Josh and Charlotte’s room was a bit too much about the art, which I didn’t love, and I hated the opaque glass built-in doors. I still have high hopes for this pair though. And Ayden and Jess, my favourites at this point, did the best in my view. Their room looked less embarrassing compared to the all-star couples’ slick efforts. The floor was a bit wrong though.

And before I go, can I just say, once again, how disappointing and ridiculous I find the huge amounts of bitching on The Block Facebook page and elsewhere (Darren and Dee’s page too) about the result and the show supposedly being rigged. And people being massively over the top about winners being announced on social media before all states have had a chance to see the outcome? Calm down, people, it’s just a TV show! I personally couldn’t watch the show last night because I was having dinner with my in laws. So I recorded it and then deliberately stayed off Twitter and Facebook until after I’d watched it a few hours later (in order to write this post and for my own enjoyment). Had I accidentally found out before I watched, well do you know what? It’s really not that big of a deal. Sigh. I just wish people would put as much effort and passion into fighting some of life’s real injustices rather than spouting venom about a reality TV show and its contestants.

So, what did you think? I’m sure the all stars’ winner decision will be controversial being that Dee and Daz are a bit love ’em or hate ’em! And simply because all three couples made top efforts. Poor judges, that was hard! But that’s reality TV for you! Roll on this week!