Oh my goodness! Last week I said I’d disregard the drama in my room reveal write-up but that wasn’t really possible this week, being that Jason and Sarah didn’t finish their room and got zeros across the board. And when I say didn’t finish, I mean barely got started. The judges and Scotty were not impressed. I don’t think I’ve ever seen Mr Nice Guy Scotty so serious! And don’t get me wrong, I absolutely sympathise with how stressed, skint and hopeless the couple must have been feeling, but to just totally down tools and give up? I just can’t get behind that.

It was a very awkward judging session, with Scotty telling the couple: “You are here on this series because you said ‘we have an attitude of never give up,’ and that’s exactly what you did this week.”

When the judges saw the room (if you can call it that) they were horrified and disappointed. “Something’s gone terribly wrong,” said Neale. Darren summed it up with a great big “WTF?”. Shaynna asked what on earth have they done for a week? “They could have at least put some furniture in to show us what it was going to look like.” Darren said it was a bit of a slap in the face. Neale said: “They’ve been given a life-changing opportunity. To curl it up in a ball and throw it over your shoulder is an insult. People try so hard to get on this show and they have blown it.”

Scotty said he wholeheartedly agreed with everything the judges said and told them that they must finish the master suite and next week’s room in the next week or they’ll be sent home. Non-negotiable. No pressure!

Hooray! They finished! This was a nice room which I don’t feel looks as good in these photos as it did on TV. Shaynna said it was very pretty. Darren loved the elongated bedhead and said the colours were on trend. Shyanna and Neale loved the floral wallpaper, with Neale saying it created a sense of romance. Shaynna was disappointed they’d left the top half of the windows uncovered (no good for sleep ins!) and Darren said the chandelier was absolutely spectacular but didn’t tie in with the rest of the room. The poor paintwork on the ceiling did not go unnoticed either. Darren loved the walkin robe, saying he dreamed of having a central island full of drawers for accessories. “I love love love love love it!” Neale thought it was just okay, not being a fan of exposed wardrobes.

There were mixed reactions to the en suite. Darren said the vanity and mirrors were absolutely amazing. Neale hated that they’d gone with chrome tapware over brass or black. 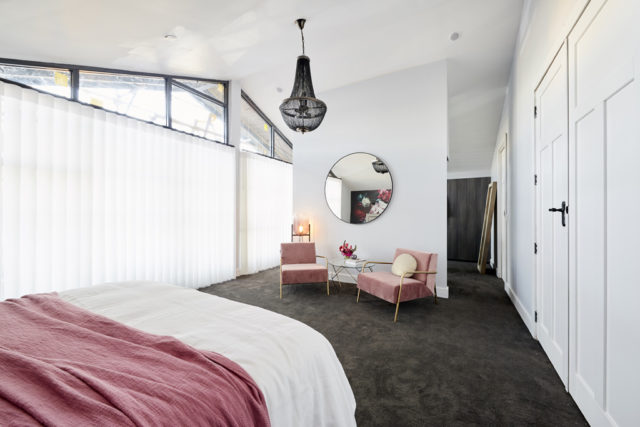 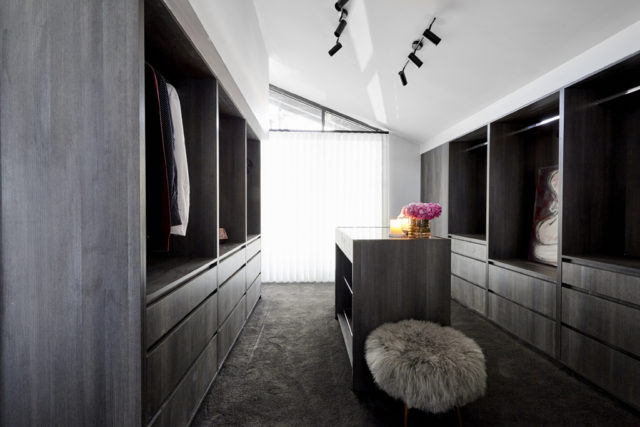 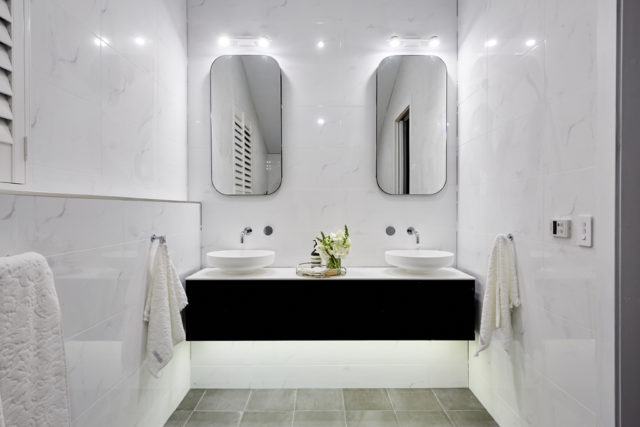 The judges loved the hallway with its art and Neale said it was like being in a hotel. Shaynna said it was absolutely beautiful. Darren added: “It’s hot, I love it.” The TV which pulled out of the wall went down very well (I want one!) but the lack of powerpoints by the bed lost them points and, ultimately, the win. 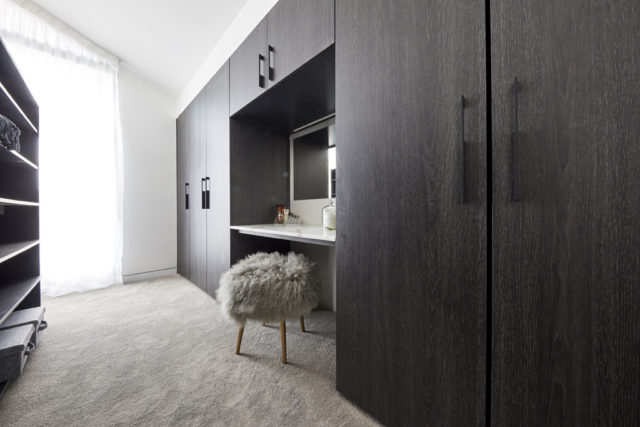 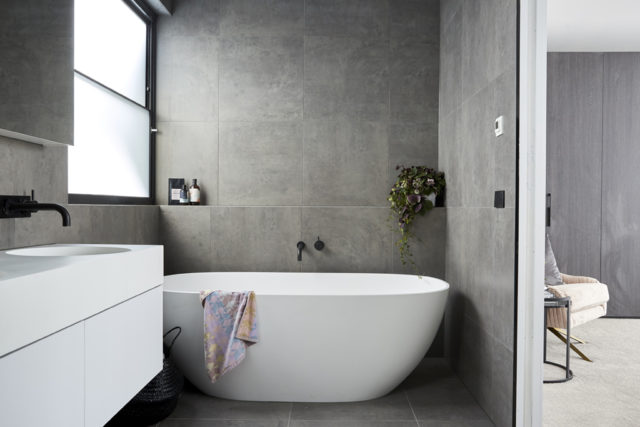 Shaynna said the built in rocked her world and the en suite impressed them all with its bath, double shower and double vanity. “It’s beyond luxurious,” said Shaynna. “It’s exactly the bathroom that goes with that bedroom.”

Poor old Wombat was left to crack on alone as Sticks headed home to wait for the imminent arrival of his second child, who still hadn’t arrived when judging came around. Typical! Then their blinds were measured wrong so couldn’t go up. Lucky Jason and Sarah had plenty of time on their hands to help out… 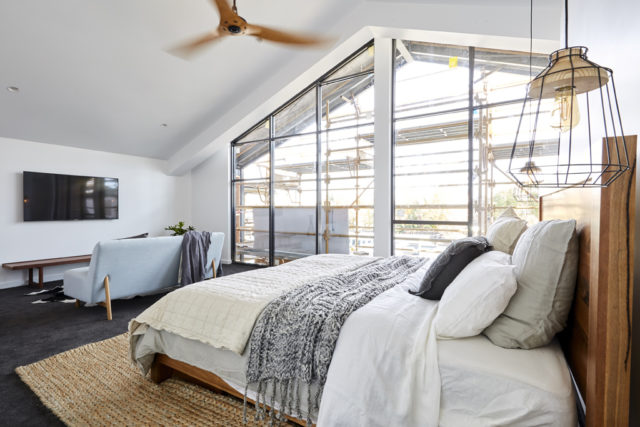 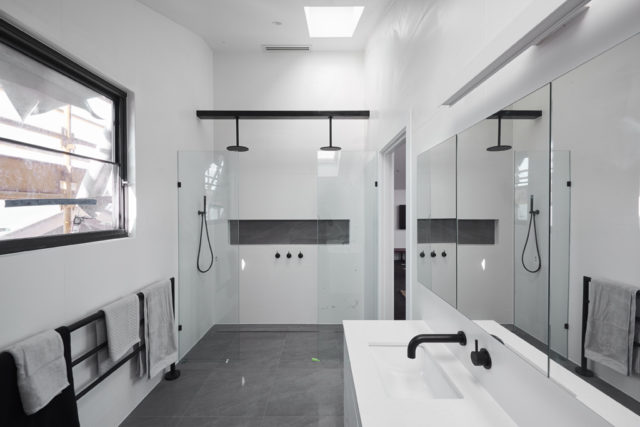 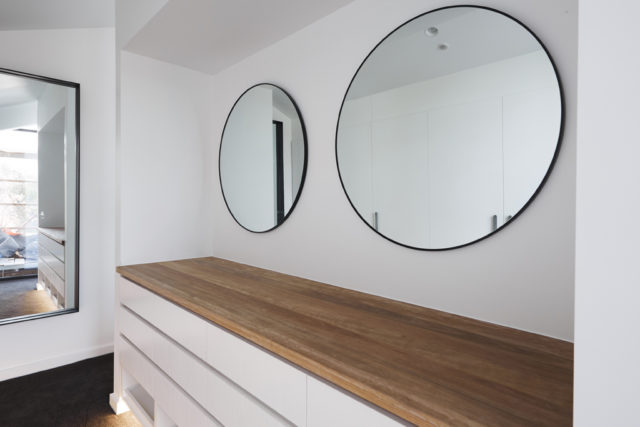 Neale said the styling was ordinary and Shaynna said it felt a bit casual, like a guest bedroom. Darren noted that the execution was better than some of the other houses though and it was the best paintwork they’d seen so far.

Things got better in the built-in. The judges said it was elegant, glamorous, and the door handles were magic. “The boys are frustrating because they do little bits of rooms really well,” said Neale.

They loved the en suite too, especially the beam across the double shower and the long towel rail. Neale said it was a generous and well thought through room. Shaynna said they just needed to re-style the bedroom and they’d be onto a winner. Sadly, as it was, they came last!

Now, I get to see the photos of the rooms before the show airs and I would have bet a lot of money that these two would win, and they sure did, if only by half a point! 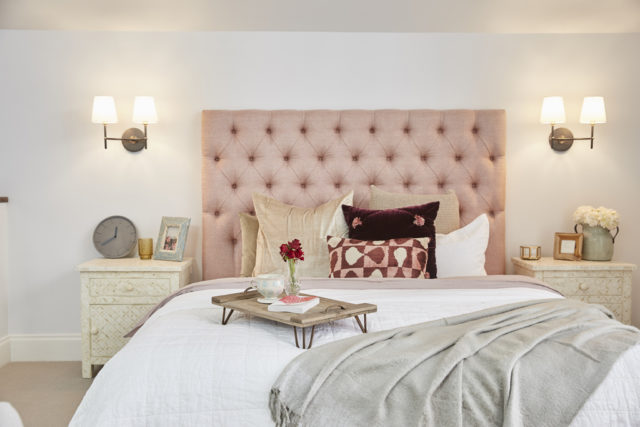 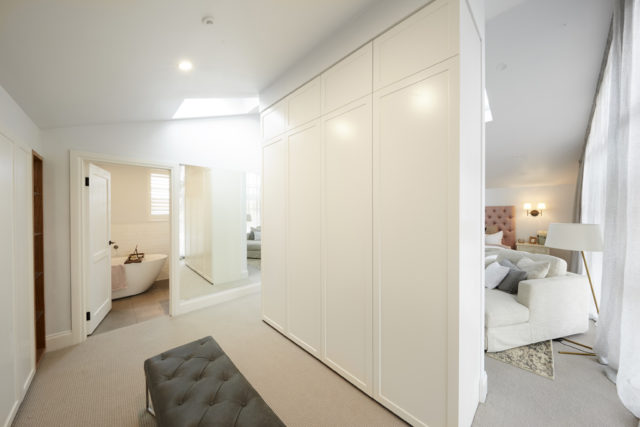 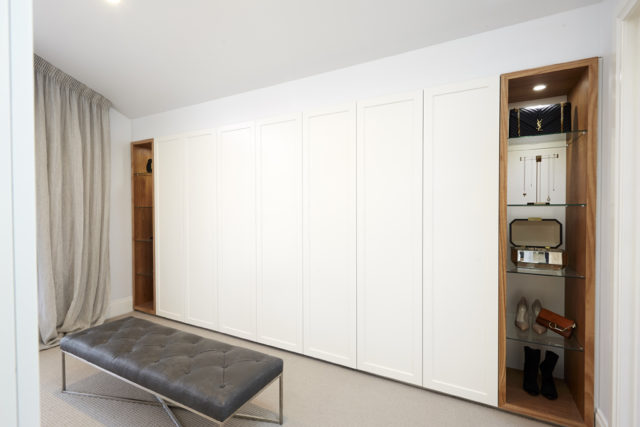 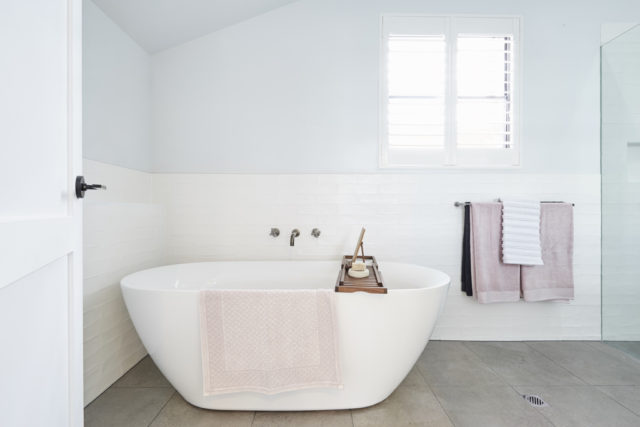 Darren said it was amazing, Shaynna, gorgeous. But they noted the room felt grand and massive because there was no privacy and no door, and strongly recommended they try to fix that before auction day. Shaynna loved the render, the double curtains, the colour palette and the look. Darren loved the bedhead.

Shaynna didn’t like that the lounges and seating area were all about the TV but Darren and Neale weren’t bothered!

The art  (although nice) was all wrong though, eh?!

They said the wardrobe was excellent, a great size and very functional.

When it came to the en suite they were pretty much speechless and I can see why. “It’s va va voom,” said Darren. The judges praised the tile choices and Neale said if he had to choose one bathroom to have a bath in, it would be that one. I have to agree, it’s my favourite bathroom of the series so far. It just works!

Our picks to buy: Kensington bedhead by Heatherly Design Bedheads (who else?!), black wooden beaded chandelier from Fenton and Fenton, New Hampton daybeds from Freedom, sconces from west elm.

More on The Block.