It was an important space on last night’s Block room reveals: the formal living. Up front, I have to say I don’t think the following images do the rooms justice as they certainly looked a lot better on TV than they do in the photographs. These things can be so hard to capture sometimes! But overall, it was another strong week so early in the competition and I agreed with the judges’ first place for El’ise and Matt. 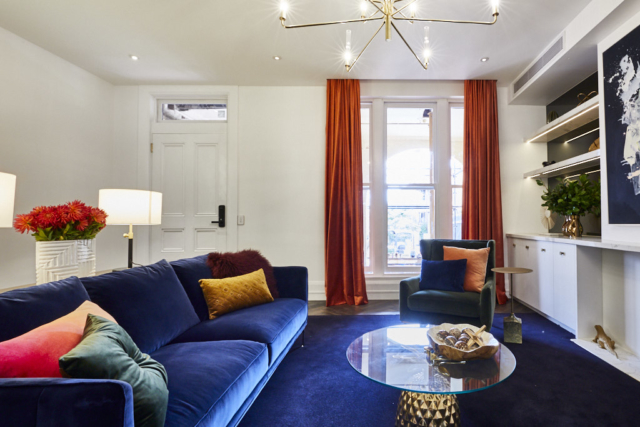 “Honey I’m home” were the first words out of Darren’s mouth. “Me too,” said Neale.

“I am loving these guys’ sense of colour,” said Shaynna. “These guys are Hollywood. It’s lush, it’s over the top and I love it.” 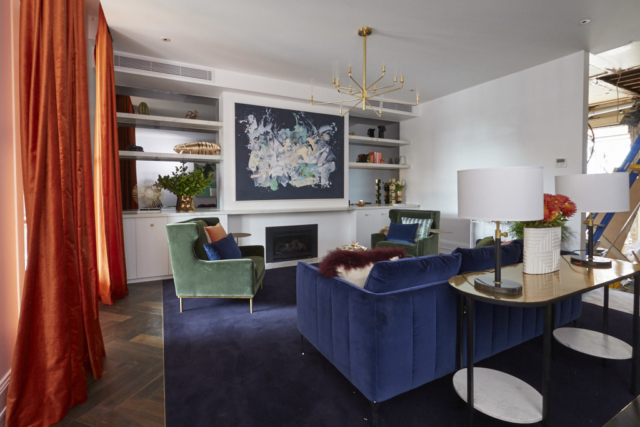 They loved the herringbone floor and the inset carpet with the brass detail. “It looks really finessed,” said Darren.

Neale said it felt like it had been there forever, which was a big compliment.

The only issue Shaynna had was that everything was directed around the fireplace and it shouldn’t have been flush to the floor. Darren didn’t like the marble-look shelving because it didn’t feel as authentic as everything else in the room. 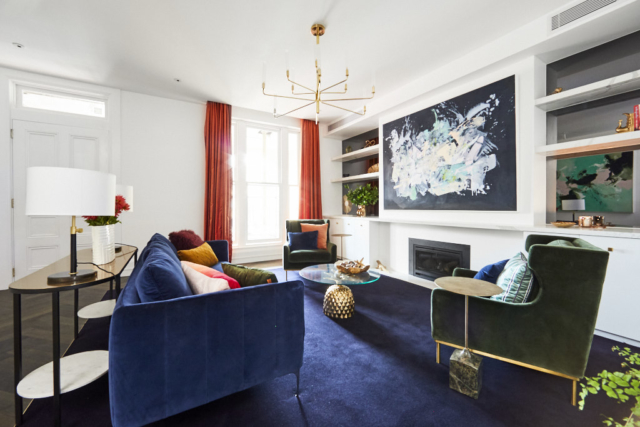 But it was otherwise good news with the judges saying this was the standard they’d expect towards the end of the competition, not this early on. “They’ve made a masterpiece of it,” said Darren. “It’s amazing.”

They all hoped they had the stamina and budget to continue in the same vein. 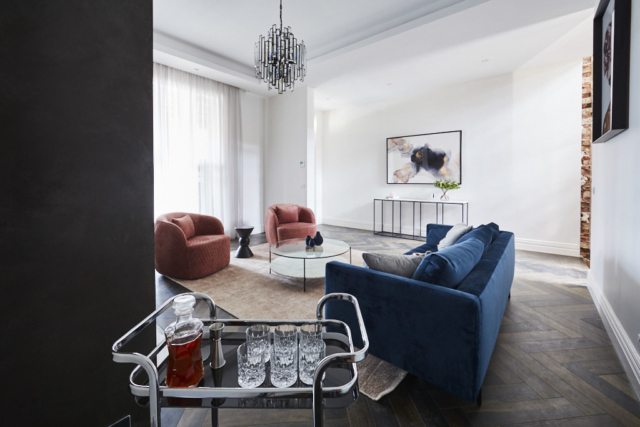 First up, it was the first time this couple had finished a room!

“It’s another wow room,” said Neale, on first impression. Darren loved the flooring, the colourscheme and the lighting plan. Neale’s first instinct was that it was a very elegant but blank canvas. “As blank canvases go it’s a very good one. I want to come in here, roll my sleeves up and finish the room for them!” 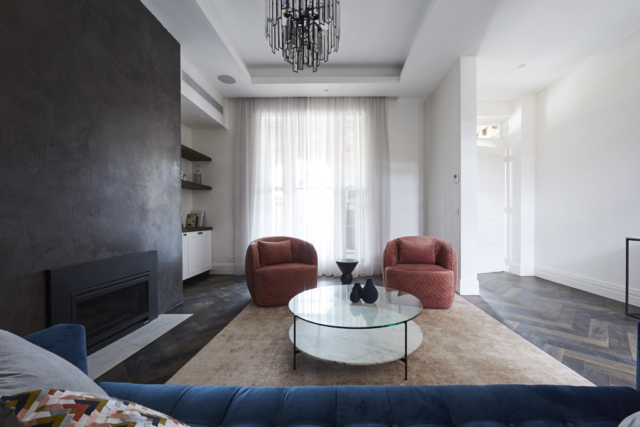 Shaynna said the dark shelves were a mistake and felt too heavy. Darren said it was 80% there. “They need to add more.”

Neale said: “Give me some things that make it feel like a home. This certainly isn’t the room to pull back on.”

Our picks to buy: Empire chandelier in black by Beacon Lighting | Make Me Blush artwork by Hannah and Clint X Artist Lane It was off to a great start again. The green wall was immediately popular with all three judges and the artwork choices were “genius”.

Darren said: “Everything in here feels like the right scale for the space. They’ve found a really nice balance to make these grand spaces feel personal.” 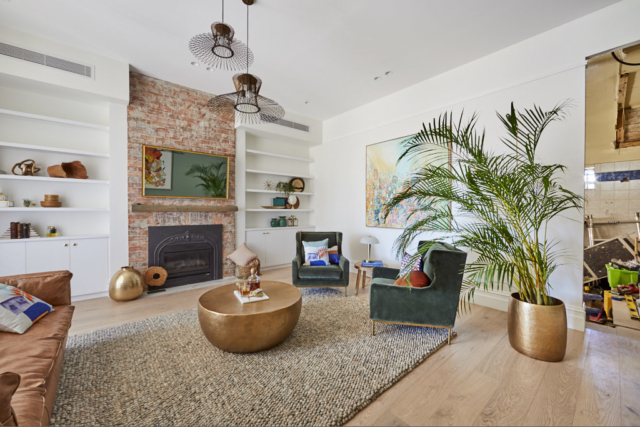 Neale said there was a sense of Colonial. “I love the fact they’ve introduced one small lamp. You could actually have some ambience at night.”

Shaynna however said it didn’t feel cosy enough. It was too white and bright and they should have used that green on all the walls. “They probably weren’t brave enough but maybe they should have been,” Neale added.

He thought the shelving was beautiful though, and the styling. They all agreed the LED lighting on the shelving wasn’t the right choice. They also questioned why they created a niche for the curtains when it wasn’t actually hiding what it should have! 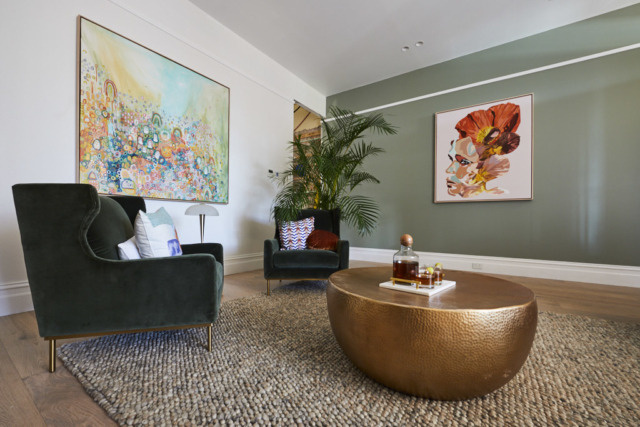 Darren said: “I love that Andy and Deb have done everything that we said in the first two judgings.” Neale said they had hung on to their style but it had grown up. 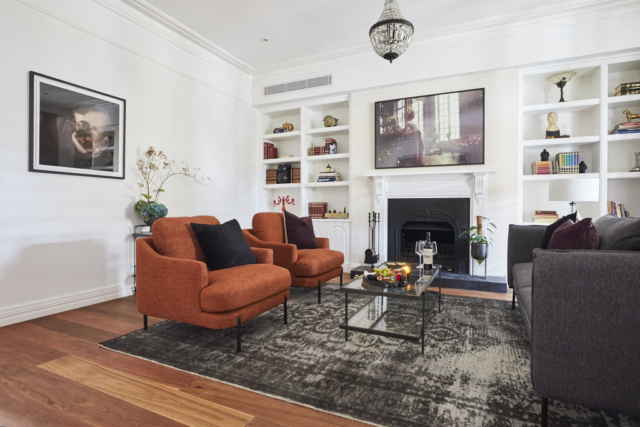 Shaynna was gobsmacked. She loved that it was the first house to do all the detailing like cornicing and the ceiling rose. Neale said: “This is pretty spectacular. This is giving Mitch and Mark a serious run for their money.”

Darren loved the colour palette. “It feels like a modern take on what this building requires which is a kind of gentle understanding of heritage detailing,” he said, and added: “I’m fizzing out!” Then they all lost it over the Venetian plaster on the walls. Shaynna loved that the fireplace was elevated to the right height and had a mantel.

“It seems like a real home,” said Neale. “Because they’re the sort of layers you build up over time.”

“This couple’s sense of romance and heritage excites me,” says Shaynna. 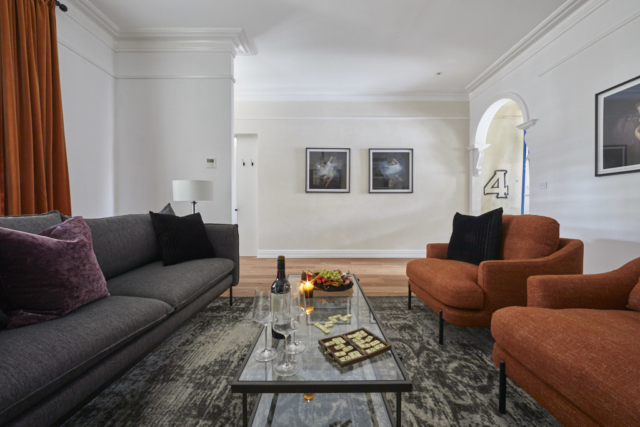 There weren’t many negatives. Neale said the hallway side of the room was a little under styled. But that was it!

Our pick to buy: Vittoria Curve sofa by GlobeWest 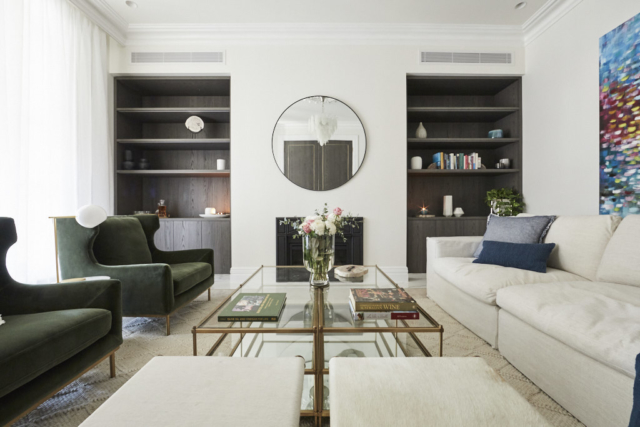 The pair changed the floor plan, adding a hallway. And spending a lot of money on doors (and other things!) in the process.

“They’re incredible doors,” said Neale. “That’s a serious amount of work,” said Darren. “To put that amount of money and effort into a door is huge on week two. This looks super contemporary to me, right out of a luxury designer showroom.” Neale said it didn’t feel as homely as some of the other rooms. Shaynna loved the ceiling rose and the light combo but hated the marble tile border around the edge of the floor. Darren agreed and said it jarred with the rest of the room.

While there were many beautiful things in the room, Shaynna said the mirror and fireplace didn’t work together. Neale said it felt a little forced: “I feel like I’m in some kind of corporate waiting room. It’s not feeling warm and fuzzy.”

Darren said Jesse had taken a very real estate approach to decorating. “It does present well but it doesn’t have the homeliness and the lived in story we’ve appreciated in some of the other houses.” 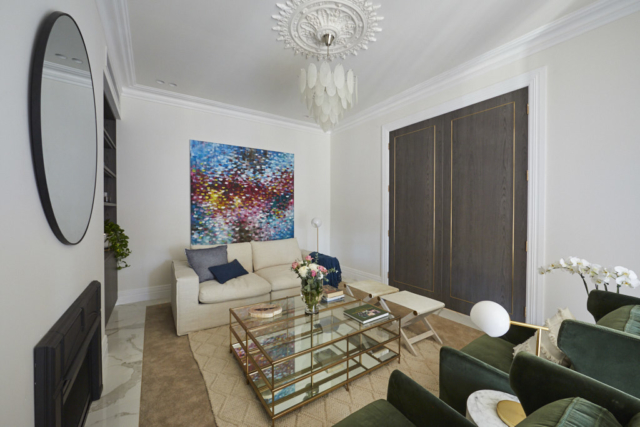 Shaynna said the accessories were bargain basement and didn’t elevate everything else in the room.

On a positive note they agreed their project management skills were outstanding to have achieved that level of detail and on time.

So, what did YOU think? We’d love to hear which room was your favourite!