I’ll admit I don’t usually get excited by brand new houses but Subiaco House changed my mind and proved me wrong. As the judges of the 2020 Houses Awards said, it’s “radical by stealth,” fitting in beautifully in its Federation era neighbourhood while having its very own unique look and feel.

It’s a new family home in the leafy WA suburb of Subiaco. This generous family house engages its occupants with their community and sensitively responds to the rich, established character of the streetscape.

The can tell the jurors were excited by this beautiful design by Vokes and Peters with its “timber bay windows on street elevations; an exuberant hat of terracotta tiles; rainwater heads like neat broaches on notched lapels; and its rafters, battens and struts glimpsed in flashes of the petticoat.

“The home’s finely detailed interiors are rich with material and tectonic expression, in tile, stone, concrete, metal and timber. Skirts and cornices are there but not there. Neat ankles touch down lightly.”

It’s perhaps no surprise it won the New House over 200 m2 category.

“It harnesses the “public” front garden of the house, co-opting it into the private space of the house, while also cunningly giving it back to the street. Inside and outside are drawn together, as are public and private. The suburban corner is held by an occupiable cloister edge, as if the Federation house figure-ground diagram now has intriguing shades of grey at its periphery. It is an expansive and radical rethinking of the suburban garden fence.” Is this the best house in Australia? Houses Awards 2020 announced!
A humble beachside restoration in the Gold Coast suburbs has been awarded the 2020 Australian House of the Year. Chosen by a panel of industry experts, Cantala Avenue House by… 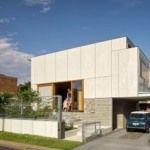 Sustainable homes Australia: this modest one’s a winner
Earlier this week, we shared with you the winner of the Houses Awards 2020 Australian House of the Year and today we’re sharing the winner in the sustainability category, Waratah…
FacebookPinEmailTweet