When owner builder Pat Gaffney noticed the empty block next to his federation home was going for a song, he snapped it up with a view to planting a lush urban garden, thinking a home was out of the question due to site constraints. “Pat came to us and asked us if it would be at all possible to build something on what he described as a weird site with a giant sewerage line underneath,” says the home’s architect Dimitri Kapetas of EHDO Architecture. 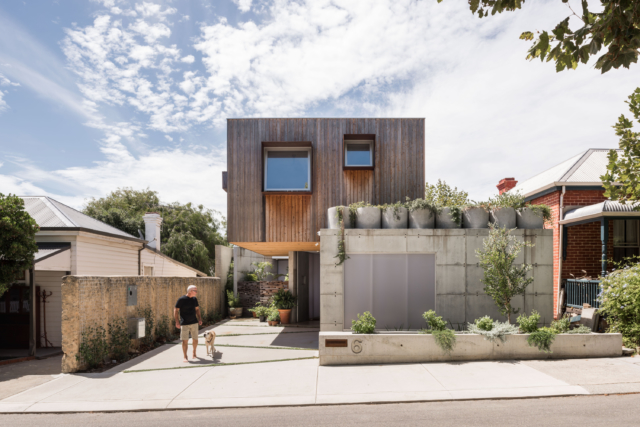 “The site has a four metre wide sewer easement running diagonally through it. The first thing we did was find out what the restrictions were before designing the home around them,” says Dimitri of the house that is located in the breezy Perth coastal suburb of South Fremantle.

The home is comprised of two trapezoidal buildings that are joined together with a removable link, should the sewer inspection point at the back of the block require access. “The front door is a four metre wide, folding polycarbonate door that can let light through and a truck too should the situation arise! We designed it as a necessity and it ended up being a real feature. It links the two sides and Pat hangs out there all the time. You can look straight through the building and let the breeze through too,” says Dimitri.

Home to Pat, his wife Sonia and their adult children, the three bedroom, two bathroom home took 2.5 years to build as Pat worked on much of it himself – the home’s sharp diagonal lines (and striking use of concrete and plywood) providing the perfect backdrop for his collection of art and Danish furniture.

“Pat built it slowly in his own time. He also had a terrible accident during the build where he fell down the home’s stairwell and shattered his knee. Two months later he was back on site hobbling around on crutches!” says Dimitri.

The home was built with sustainable principles in mind and features plenty of sustainable timber including plywood and Cyprus. “The external timber cladding is made from Cyprus which has a naturally occurring oil that termites hate meaning it doesn’t require any chemical additives,” says Dimitri.

Dimitri struggles to pick his favourite thing about the home though reveals it’s the quiet nooks that allow for contemplation. “I love the little sunken living TV area. It’s three or four steps down and it’s got a big north window that looks onto a pond. There’s a concrete ledge you can sit on to enjoy the water.”

This home is an entrant in the 2018 WA Architecture Awards in the ‘Residential Architecture – Houses (New)’ category.

For more | Another angular real home