As regular readers will know, we have been slowly but surely (some would say pretty quickly actually!) updating our family home from the “nanna house” we bought, for a year now. The bedrooms got off to a good start really quickly with carpet, paint, plantation shutters and new lighting. But the wardrobes were seriously letting them down. Until now!

Bedrooms are definitely a lot easier and cheaper to refresh than kitchens and bathrooms! But the old wardrobe doors, most likely original from the 60s, screamed DATED. They were wood veneer when we moved in (so much brown!) and we quickly had them painted white which made a big difference but they still didn’t exactly look great.

The wardrobes not only looked bad, were also really really annoying! In two of the bedrooms, the smaller wardrobes had an excessive three sliding doors which meant the space you could actually access the wardrobe through when they were open was frustratingly small. In Seb’s room they were continually falling off their runners until it got to the point that the bottom track fell out and it was game over. So what great timing it was to be approached by Sydney Doors about working together!

As mentioned, painting the doors white was a decent stopgap but did nothing for the functionality and usability of the wardrobes so we didn’t really use them much. And in under a year, that oil-based white paint had yellowed. Much as we weren’t in love with them, we had so many other competing jobs on our to-do list we didn’t really think about when or how we’d fix them because ripping them out and starting again seemed like such a huge and expensive task. I had no idea it was possible to replace just the tracks and doors.

Sydney Doors, who have been around for more than 20 years, offer the chance to update your wardrobe, or indeed kitchen, for a fraction of the price by simply replacing the doors only. They have loads of designs to choose from and you can have them custom colour matched (ours are Haymes White on White to match our internal doors and trim). They arrive made to your exact size specifications, which is why this works even with decades-old wardrobes like ours, and they’re spray-painted in hardwearing polyurethane with a satin, matt or gloss finish.

There are loads of designs but I was keen for ours to be in keeping with our internal doors and shaker-style kitchen, so the choice was easy. It only takes around three weeks for your doors to be made and then delivered anywhere in Australia. You can then install them yourself or use one of their recommended installers. If you’re not confident of measuring or installing yourself, they definitely recommend you use the services of a professional and can provide a list of people near you.

An installer came to measure our wardrobes and he suggested we replace the three doors in the smaller wardrobes with two for better access. It was the best call ever! They’re so much more useable now. Meanwhile in the spare room, the existing three doors on the much larger wardrobe were replaced with four, which looks so much better.

I am absolutely delighted with the look of our doors, which have transformed and modernised our bedrooms; they really were the last piece of the puzzle. It’s also amazing to actually be able to use them properly. As we all know, you can never have too much storage and this has made a huge difference to us. The whole process from ordering to delivery and installation was seamless and quick and the end results have exceeded my expectations. This is definitely a great affordable option and I hope something I’ve brought to your attention if you didn’t know about it before, as I didn’t. 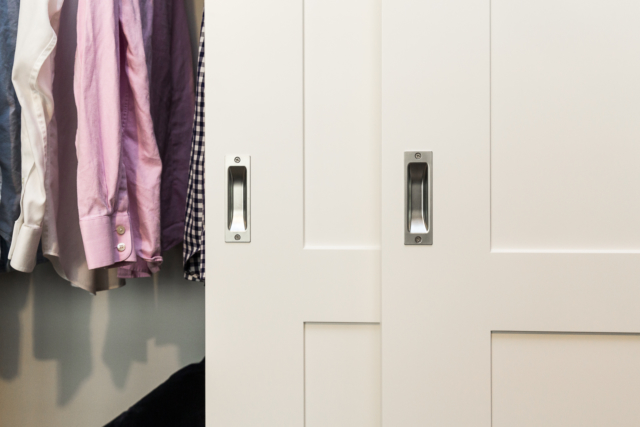 Sydney Doors are offering our readers a 5% discount on all painted kitchen and wardrobe doors until 30 June 2018. Simply quote the code IA5OFF when ordering.

Get a free quote by submitting your door sizes at https://sydneydoors.com.au/quote-or-order/ or make an appointment for a measure and quote with one of their referred installers.