Last night’s was an altogether calmer episode of The Block and we got to the room reveal action quickly, which is always good! The poor remaining contestants were so worn out, they tried to get away with sitting down for judging but Scotty was having none of it! Luke and Ebony reckon they’d only had about six hours’ sleep in more than 50 hours. Ouch. Onto the judging…

Tim and Anastasia. Came 4th and stayed in by the skin of their teeth. 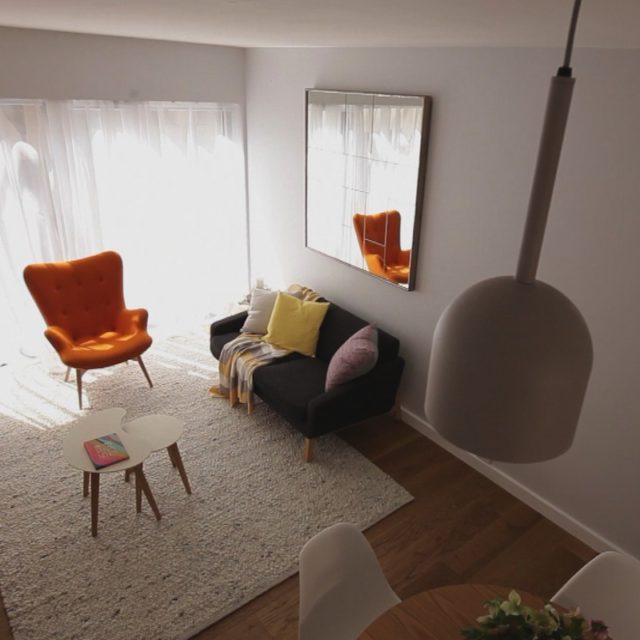 Shaynna Blaze, who was absent from last week’s judging, said it was beautiful, a knockout and an incredible start. Seriously, will the judges stop being so damn nice?! Neale Whitaker was wowed at what had been achieved in 48 hours and both judges said the attention to detail was great. Neale said we’d never seen anything like this in an elimination round and it felt really lovely. 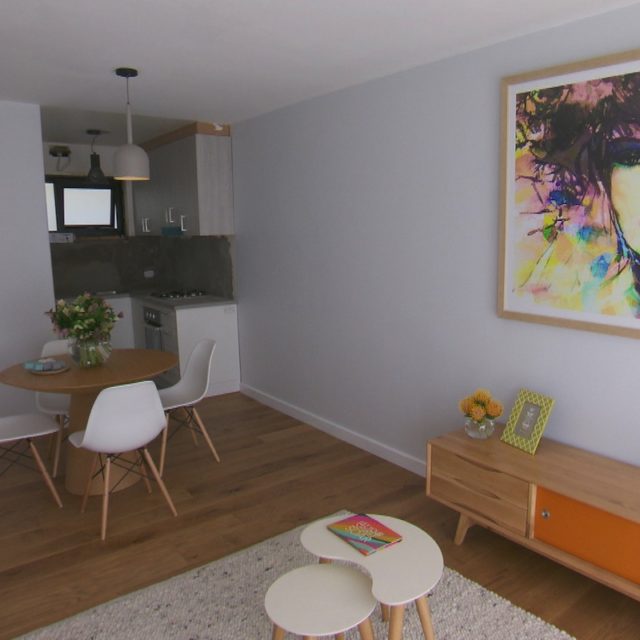 There was criticism though: using a nest of occasional tables as the main coffee table, a wonky pelmet and no TV. The paper pendant light was a hit but Shaynna said there wasn’t enough lighting for the evening overall.

OUR PICK TO BUY: Kooper pedants. 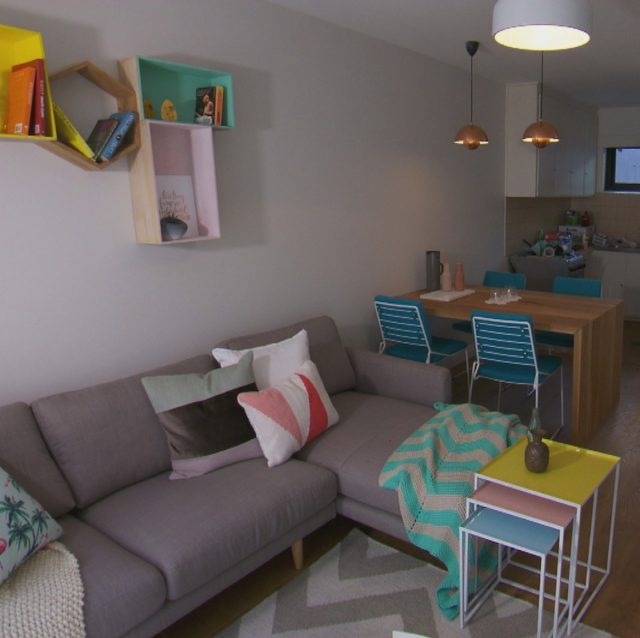 Cabinet maker Ayden took a risk making his own table in limited time but it paid off. Neale said the couple had a great sense of fun, a bit of edge and cool. Both judges thought the styling was simple and fun. The couch was a good size, the lighting choices were spot on and it had a Miami feeling. In fact, they struggled to find anything wrong.

OUR PICK TO BUY: Meridian console mirror (so handy!).

Aimee and Brooke came last and were sent home. 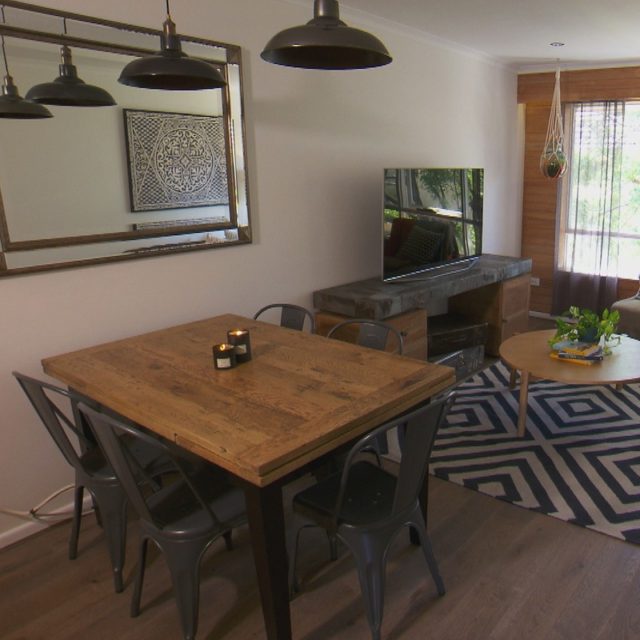 I really liked this ditsy pair last week, but this week found them a bit too cocky and didn’t like the snide comments they made about Ebony and Luke’s pink wall. Neale said their look was consistent with last week’s bedroom and he liked the couch and artwork. Shaynna had a good first impression but on closer inspection thought the furniture’s proportions were all wrong with the too-chunky entertainment unit and too-small lounge. I’d have to agree.

OUR PICK TO BUY: Solid oak round coffee table (similar to theirs). 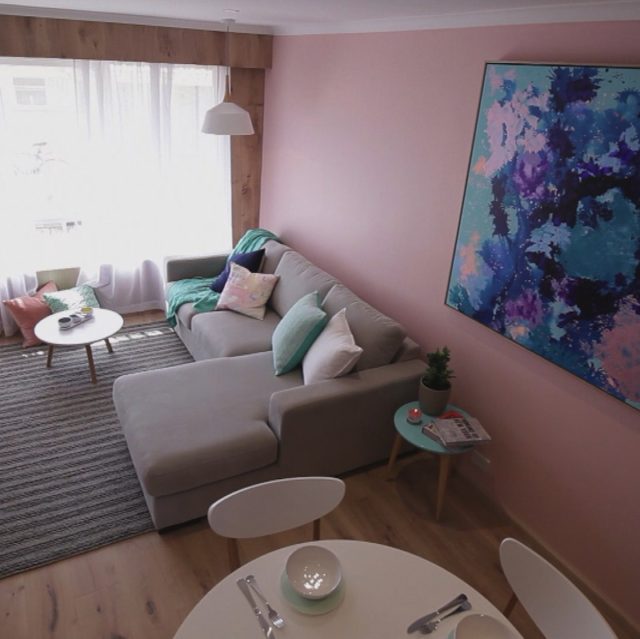 This brother and sister are growing on me all the time. They just seem like decent people who aren’t too full of themselves, even though they do seem to have a really good idea and more of a clue than some of the others. They came fourth last time so this was an improvement! Their calamine lotion pink wall was a risky move but personally I loved the overall look and how it worked with the Katie McKinnon art (which they also used in their bedroom).  Shaynna said it was a very dividing colour but they more than pulled it off. Neale added: “The return of pink. Wow.” There were tiny criticisms like a few drips of paint on the wall and the underneath of the pelmet being unfinished.

OUR PICK TO BUY: Katie McKinnon artwork (of course!).

Charlotte and Josh. Came 1st, second reveal in a row! 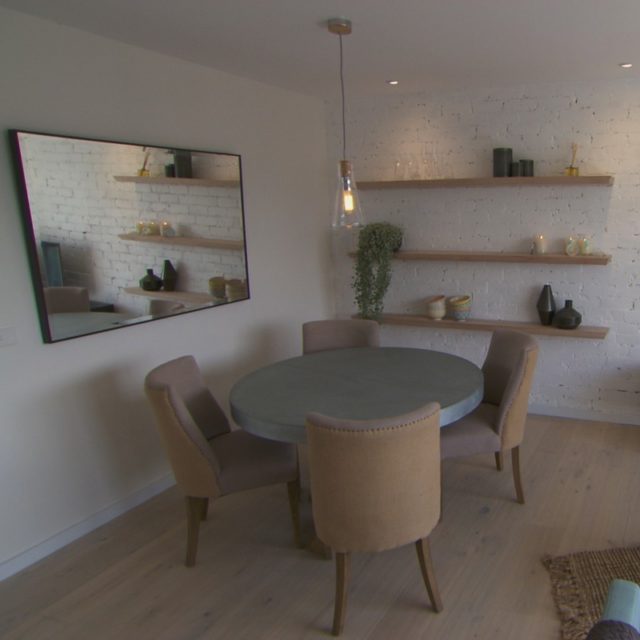 Again, another risk that paid off, these two decided to exposed their brick wall. Even though it was a weird mustard colour, they recovered from it by painting it white and still making a real impact. You know Neale really likes something when you see a big grin rather than his more usual half-smile and this is what we saw last night. “Wow. Unbelievable. Stunning,” he said. I think we knew they were going to win! Shaynna said it was a whole different look to the other rooms and  Neale agreed they’d taken a box of a room and given it soul, a “stroke of genius”. I didn’t like their artwork or the rug at an angle, which of course Shaynna couldn’t go past either!

So, what did you think? Love or hate the pink wall? Agree with the cousins going home? Who is your favourite couple at this early stage?