With two sons, it didn’t take long for Aussie landscape designer and TV host Charlie Albone and his interior stylist wife Juliet Love, to outgrow their two-bedroom home. After going on the real estate hunt, they eventually stumbled upon a two-storey beachside semi in Sydney’s eastern suburbs that was ripe for renovation. Despite falling for it, the couple thought it was out of their price range but decided to put in an offer anyway.

“As it turned out, the former owners needed to sell quickly, and a lot of buyers were put off by the dated interior, so we made a low offer and to our amazement they accepted it!” says Juliet, who has since renovated the home on a relative budget with a mix of clever styling tricks, secondhand and affordable finds.

“Our last home was a little more Hamptons with lots of navy and white, but this time around we wanted a more laid-back, calm feel. We went for a soft colour palette of white, blue and seafoam green,” says Juliet.

A largely cosmetic renovation, the biggest change took place in the kitchen and lounge area that was transformed from a pokey nineties kitchen full of black granite to a much more modern space courtesy of a mint green marble fishscale tile splashback, brass tapware, round glass pendant lights and large Caesarstone island bench. When it came to the flooring, Juliet used Porter’s Paints Wood Wash in ‘Conifer’ to update the original home’s yellow-hued pine.

In a clever move, she specified matching joinery in the nearby living area to ensure a seamless transition from the kitchen. The joinery houses a television, concealed shelving as well as open shelving that displays photos of family and friends and sentimental objects. “By using matching joinery, Caesarstone and brass hardware, it really makes the room flow,” says Juliet.

“The stylist in me is forever changing vignettes around the house, so I like to have some open shelving to display objects, but also added enclosed shelving below to hide some of the mess that comes with family life!”

With budget concerns top of mind, Juliet employed clever tricks and secondhand finds to realise her vision. “I like to mix high and low end generally, as I find you get the most visually interesting outcome for the least expense. I’m a big believer in having one or two big ticket items to elevate a home – if everything is cheap, it will look cheap. For us, we decided to invest in the marble splashback in the kitchen.”

Money was saved elsewhere by reusing old furniture including a chest of drawers that used to belong to Juliet’s grandfather and that she didn’t initially think would work.  “I didn’t think the drawers would fit with our vision of a breezy coastal abode, but we’ve placed them on the landing at the top of the stairs, and they works perfectly there.” She then added a round sisal rug, vintage pineapple lamp with a hessian shade, and some coral to work the piece into her interior scheme.

Affordable art is scattered throughout the home – another one of Juliet’s budget-friendly tips. “I love affordable artwork to dress your walls and elevate a space. Art literally changes the feel of a room in an instant,” says Juliet who sourced most of the pieces through Hop Home.

The kids’ playroom was created on a budget using IKEA furniture upcycled with unique brass hardware. Olive et Oriel jungle-themed wallpaper makes a statement in the space too where it hangs above the IKEA daybed. “With the wallpaper, I just used one panel behind the daybed, which was enough to give impact, without the expense of papering the entire wall or room,” says Juliet.

Other kid-friendly design decisions include slipcovers on the sofa, wash and wear paint, replica Philippe Starck Ghost dining chairs that can be wiped down, a glass coffee table that stores decorative items underneath as well as many multi-purpose furniture items. “Our ottoman in the lounge room opens for storage, the day bed in the kids’ playroom rolls out into a double bed for when visitors come, and the floors are scooter-proof!”

We had to ask, does Charlie, who switched from Selling Houses Australia to Better Homes & Gardens this year, get a say in the decorating or does he stick to the outside? “He has excellent taste and is usually always right when it comes to style choices, which is quite frustrating! He always says that he’ll leave it to me, but he is quite opinionated, so ends up having a say in absolutely everything! I don’t mind that though because we work well together, and we end up with a better result in the long run!”

Of course, there are plans for the back yard, which will be stage two of the renovation. “We have a DA in to council for a small pool and a pavilion with an organic vege patch on top,” Juliet shares.

The couple also have a farm on the Central Coast, Charlie’s happy place where Juliet says they’d spend every weekend if he had his way! They’ve even established a small plant nursery there for landscaping projects for clients. “We like to get up there as much as possible, but now that both boys are at school, it is becoming more difficult as weekends are full of sports and kids parties! When we do go to the farm, Charlie goes straight into the garden and spends all weekend there.” 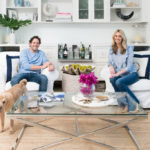 Covet my coffee table: with Juliet Love & Charlie Albone
Photography by Susan Papazian This week, we’re excited to give you a glimpse of the home of interior-exterior design duo and husband and wife, Juliet Love and Charlie Albone. Juliet…
FacebookPinEmailTweet