It’s always a popular week on The Block! We all know the kitchen is the heart of the home and we are continually told that kitchens sell houses. On top of that, there’s a lot of work involved and that usually means tight timeframes and a fair amount of, you guessed it, drama! I got to tour the kitchens last week so it was extra interesting to watch the judging this week, having seen them for myself. And I would agree with the top two scorers, for sure!

It was an extra exciting episode, with the countdown on to see if Jason and Sarah would finish (start even!) their master suite as well as their kitchen (or face being sent home) and they did. And well!  The judges were blown away. Onto the judging…

First, the judges saw last week’s master suite, which they weren’t being scored on. Darren and Neale agreed they could have been in with a chance of winning last week if they’d produced this then. Shaynna said: “You are kidding me? I want to shake them. If they can do this in a week and the kitchen, they gave up last week. This is amazing.” Neale said it was the best Block comeback ever. 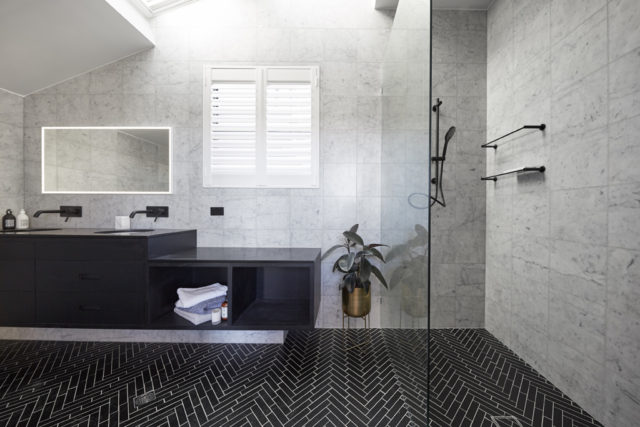 Onto the kitchen, the judges were equally impressed. “Beyond back in the game, this is incredible,” said Shaynna. They liked the metallic surfaces on the cabinetry. Darren said everything about the functionality, the materials and handles was perfect. And Neale said the built in shelf behind the cooktop was simply genius. I loved that too! 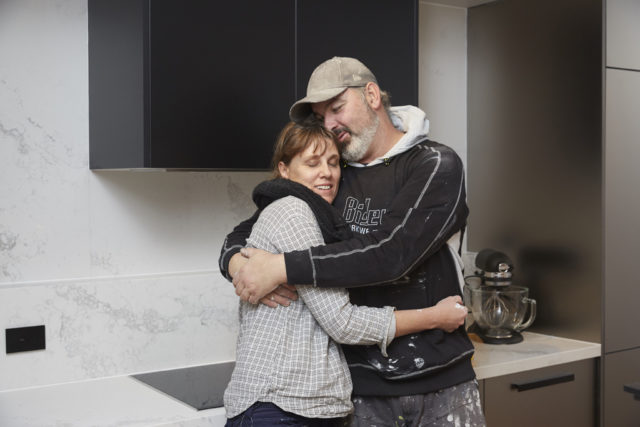 The judges also loved the mix of materials in the benchtop, using two different Caesarstones. Neale said he thought the kitchen would feel as fresh a decade down the track as it did now. 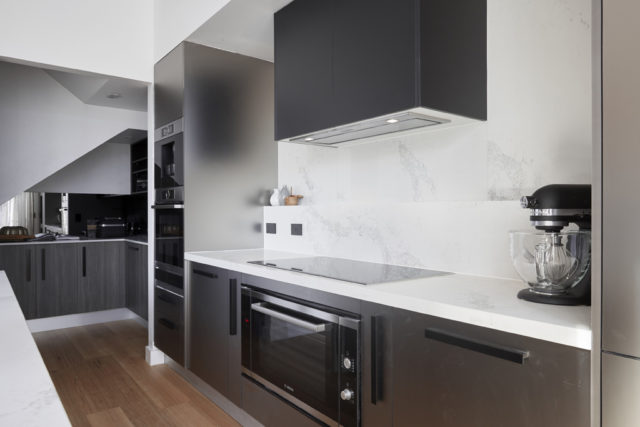 Darren summed it up as super successful and while Shaynna said the paintwork needed attention, she added buyers would fall in love with the kitchen because it works so well with the rest of the house. Having seen it, I agree.

Shaynna loved the mix of finishes saying it had a beautiful, layered feel. 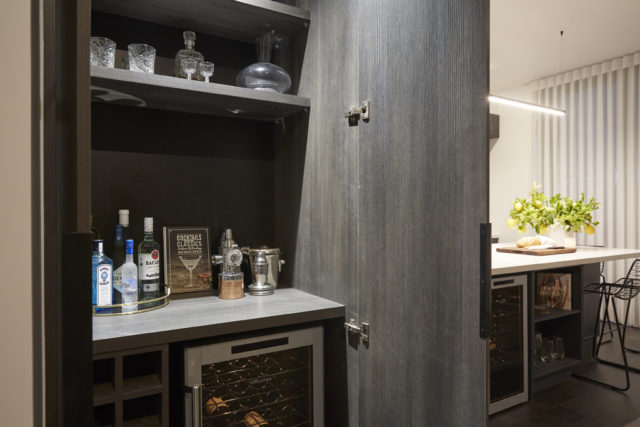 Darren noted they had a bigger dining table and more chairs and the size of the island bench was fantastic. Shaynna loved the placement of the sink, bins and dishwasher. They were let down by size of the fridge however. Ultimately this lost them valuable points and saw them come last.

Neale thought a study nook would have been a much better better use of space than a bar in a family home. And Shaynna said while there were some big ticks, the too-small fridge and the cocktail area were overshadowing how she felt about it.

Despite this, the judges said the room was contemporary and sophisticated and will impress the buyers.

Our picks to buy: Encore stools from Freedom and Organic Choice cleaning products.

Ronnie and Georgia (third place with 28 out of 30)

He also loved the size of the kitchen sink, the double integrated fridge and the fancy benchtop exhaust. He noted the use of black and how it tied together with the rest of the house, cutting through the grey. 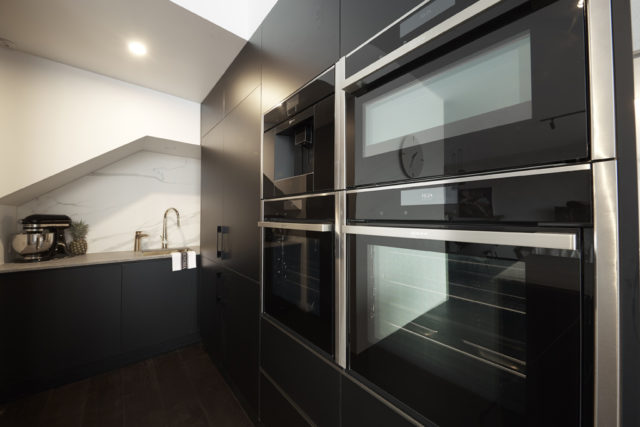 There weren’t enough powerpoints though and this may have led to them coming third instead of second. But the judges loved the study nook, especially the pocket doors.

Darren said it was what a modern luxury palette should be and the kitchen was just knockout.

Neale said there was a lot for a buyer to get very, very excited about.

Luckily, Sticks returned this week after the birth of his baby!

Darren said “this is beautiful,” loving the solid chunk of Caesarstone intersecting with the timber laminate. 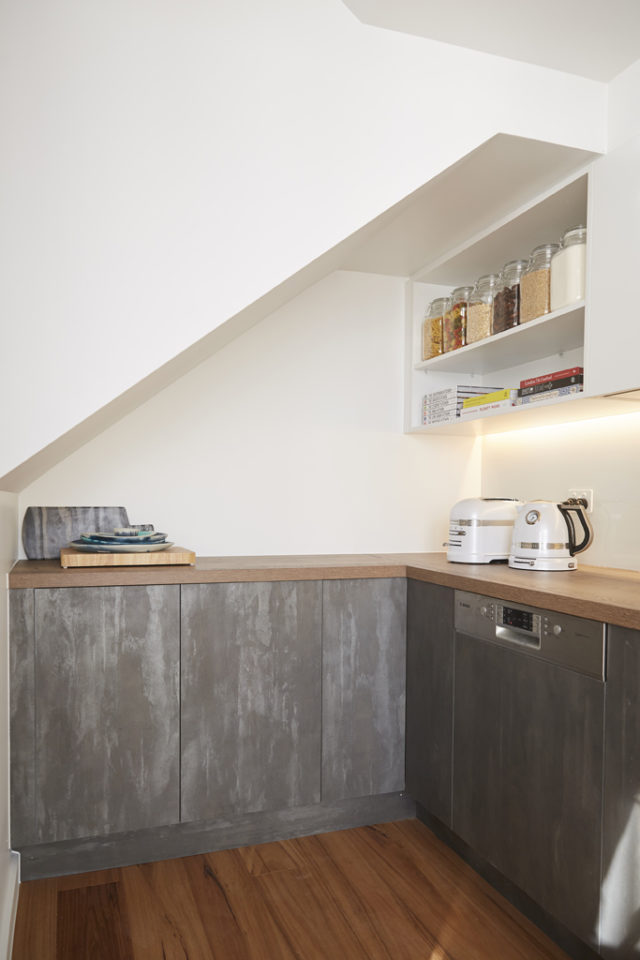 Neale thought the Ceasarstone on the splashback was “bloody beautiful”. Shaynna loved it too and the concrete-look cabinetry. She didn’t like them together though, because they were both features and in her opinion, cancelled each other out. I totally agree on this point and although I love the Caesarstone, I don’t like its use over the rangehood. I think it looks clunky. I do love the mix of finishes, the timber accents and the warm feeling and personality this space has though.

The judges loved the secret door, the whiskey bar and the workmanship of the timber by Sticks.

Shaynna said it had lots of personality and Neale said they’d delivered on their style, and very well too. “They’ve got their signature love of timber but they seem to know how to bring it into a contemporary context. They do raw luxury so well.”

It was 10s all round for the youngest contestants whose kitchen stood out for many reasons. Changing the profile of their stairway earlier gave them an amazing, large hidden butler’s pantry. And facing the island bench out towards the garden was another point of difference. 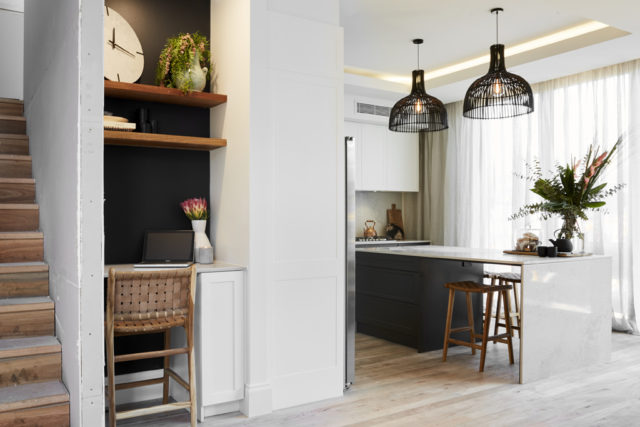 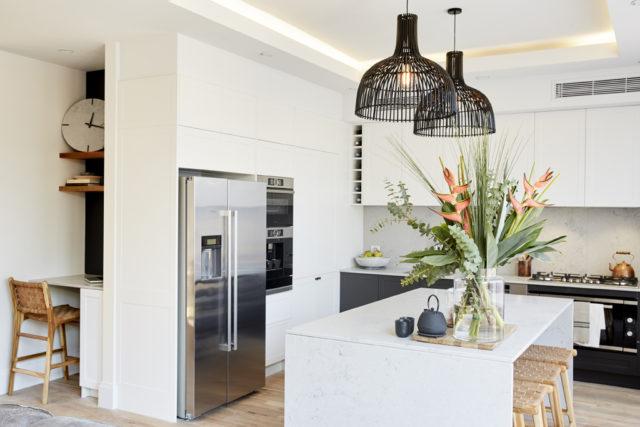 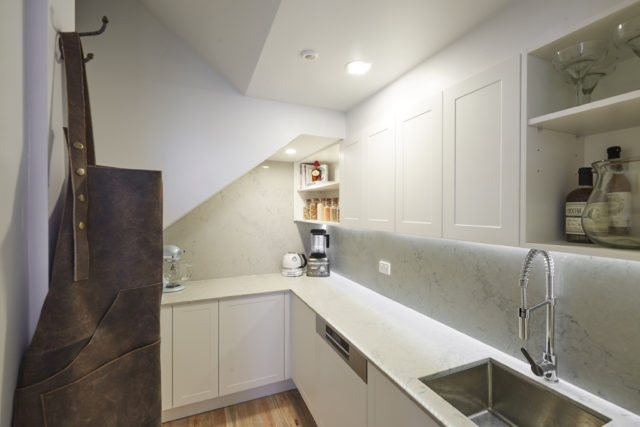 Darren said it was beautiful. “It looks a million dollars.”  Neale said it felt very, very special and sociable. Shaynna said the layout, and the continuation of the timber floor and the styling, meant it engaged with the dining and the lounge, as well as connecting to the garden. Neale said it had a beautiful warmth and sense of community that people will find really appealing.

All the appliances got ticks. Shaynna’s face when she found the butler’s pantry said it all!  The judges couldn’t find anything to fault in the execution; the paintwork was spot on and the styling “perfection”. Darren said everything was just so!

And here’s the biggy! Shaynna said up until this point she had Ronnie and Georgia pegged as the frontrunners for winning, but after today, she thought these two! Controversial! (And I’m inclined to agree).

Our picks to buy: Lacey light shades from The Family Love Tree, paddle cutting board from west elm and Sorrento cuddle mugs from Freedom.

We’ll have many more details of the kitchens throughout this week from the main suppliers at Freedom Kitchens, Caesarstone, Bosch and Neff.