Currently in its 19th year, this year’s Australian Interior Design Awards were handed out last week at a glittering gala dinner in Sydney. Arguably Australia’s most esteemed industry-based awards program, the awards are delivered through a partnership between the Design Institute of Australia and Architecture Media’s Artichoke Magazine. The awards have several categories including workplace, retail and more but it’s the residential results that we couldn’t wait to check out.

Taking out the Premier Award for Interior Design, Clare Cousins Architects’ ‘Stable and Cart House’ was called “sublime in every way” by the jury. This unique project also took out the esteemed Residential Design Award and the Best of State Residential Design (VIC). “Stable and Cart House is the absolute standout project across all categories by clearly being an exemplary piece of work. What resonates most is the authenticity of the design and the way it has been conceived to be lived in, not just looked at,’ said the jury.

Flack Studio, continued its winning streak by taking out this year’s Residential Decoration Award for its incredible ‘Troye Sivan House.’ “Flack Studio captured a strong sense of the client’s character through a beautiful curation of art, furniture, lighting and objects in a way that doesn’t feel forced or contrived,” said the jury. The home’s design celebrated the original architecture by John Mockridge while elevating it to a whole other level. One juror praised the project for having a “wonderful spirit that is overwhelmingly endearing and uplifting,” and we couldn’t agree more.

Several notable commendations were handed out too including with Arent and Pyke recognised for its ‘Legato House,’ YSG Studio for its ‘Soft Serve’ project and Alcorn Middleton for ‘Toowong Lighthouse.’

For more on the Australian Interior Design Awards 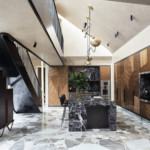