You know how they say that if you want something done you should assign it to a busy person? Well, that maxim certainly holds for one Melbourne homeowner who carried out a DIY bathroom renovation recently, while working as a full-time frontline health worker.

“This project was done during Tomi’s days off and it was his way of unwinding during a difficult period,” says Anri McHugh of his partner Tomi Ahonen who took four weeks to renovate the couple’s bathroom with a budget of $8,000. The couple purchased the beachside 1970s Elwood apartment three years ago and have been slowly renovating it since.

The bathroom’s brown tiles and peach fixtures were replaced with a chic mix of matte black fixtures, grey paint, white penny round tiles and a luxurious freestanding bath – ‘city farmhouse’ was the design brief. “It’s a style that blends cosy farmhouse charm with traditional wood panelling and contemporary elements in an urban environment. It fits in with the rest of the apartment’s look and feel,” says Anri.

Tomi carried out all of the renovation, aside from the plumbing, while Anri was on hand to help with painting and general labour. Tomi stripped out all of the tiles and fittings, laid the pennyround tiles and installed the Easycraft wood panelling too – incredibly, it was the first time he had ever done any of those things!

Arguably the most onerous task was removing the original cast iron bathtub as it had been cemented into the wall. “We had to use an angle grinder to remove it which created lots of dust. We live on the top floor with no lift so getting it down two flights of stairs was also pretty difficult,” says Anri. The bathroom tile disposal was an equally arduous task.

Essential to the brief, the freestanding bathtub is a highlight of the room. “There’s something pretty special and indulgent about a hot bath on a cold winter’s night in Melbourne. It just feels like an escape and a place to shut out the world and relax. We created a sanctuary that we can retreat into when the world gets too much.” 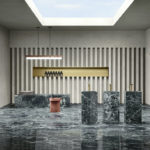 What’s new in bathrooms: April 2021
With overseas travel still out of reach (well aside from the New Zealand experiment!), many Aussies are creating resort and spa-like bathrooms at home. From sumptuous stone-like porcelain panels to…
FacebookPinEmailTweet