I really couldn’t get TOO excited about last night’s room reveals because they were so utilitarian. I’ve never renovated and although I love wine, I currently can’t drink it because I’m pregnant, so maybe that’s why! Or the fact that a wine cellar is something so South Yarra is it outside most people’s reality, but a great feature for what will be luxury homes, nonetheless! 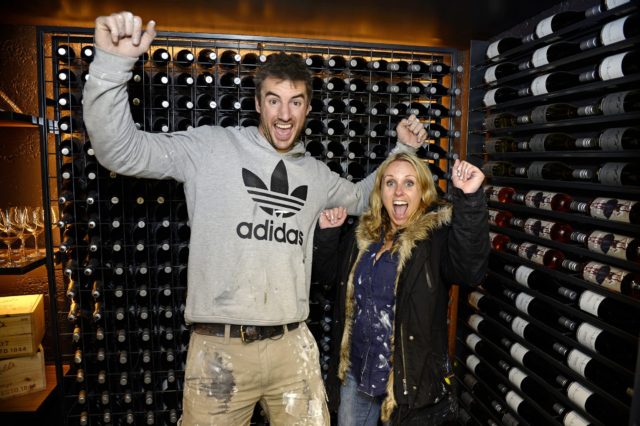 I was not surprised Dee and Daz won but I think they all did pretty well. Although I’m a little worried my favourite couple (personality wise) Ayden & Jess are losing their touch and I hated those brown mosaic tiles! Tim & Anastasia seem to be seriously lifting their game while Charlotte & Josh, bless them, but I just can’t get too excited. Here’s what the judges had to say…

The judges said their powder room was simple and elegant. Darren said it was just the right balance and liked the finish on the taps. Neale loved the tiny basin and Shaynna loved the touches of texture and personality. They all agreed it was almost perfect but they needed to be careful with attention to detail. And Shaynna thought the tap was too long for the basin. 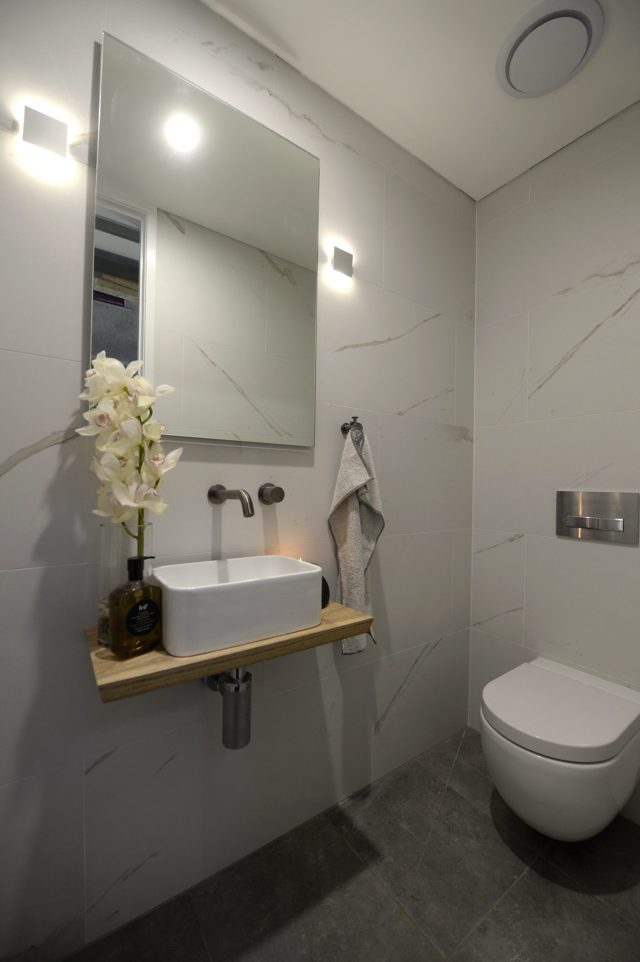 Shaynna said the laundry was like an oasis in a battlefield and a good size. Neale said it wasn’t a show pony but it had everything you’d want in a laundry. They were disappointed not to see a laundry chute but thought the speakers were a nice touch. 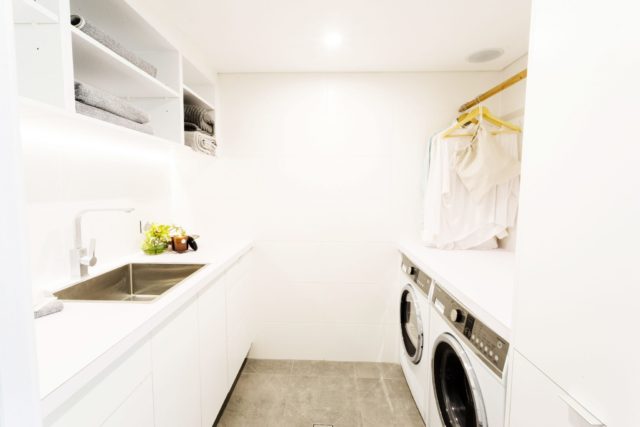 Then to the cellar. They loved the recycled timber wine rack. Neale said it was a serious cellar, beautifully done. And they all loved the storage area too. Then they cracked open a bottle and discovered it was full of coloured water! And were impressed by their money-saving ingenuity! 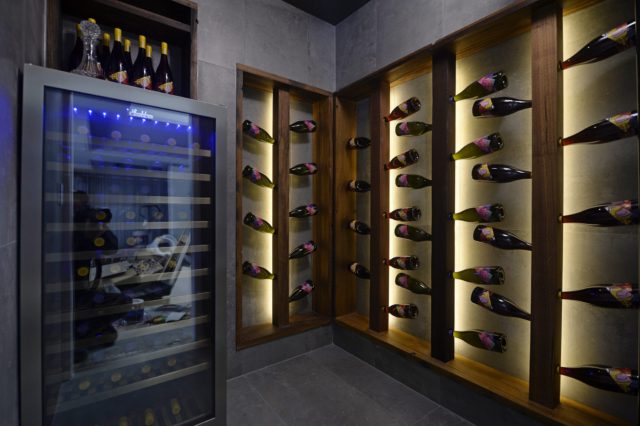 All the judges were impressed by the size of the powder room. Neale said it had a feel of luxury and grandeur similar to last week’s bedroom. Shaynna was worried they were spending a bit too much money too soon, like on underfloor heating in the powder room. But Darren said why not in chilly Melbourne? Neale loved the styling. Darren said the execution and finishes were up to their usual standard. 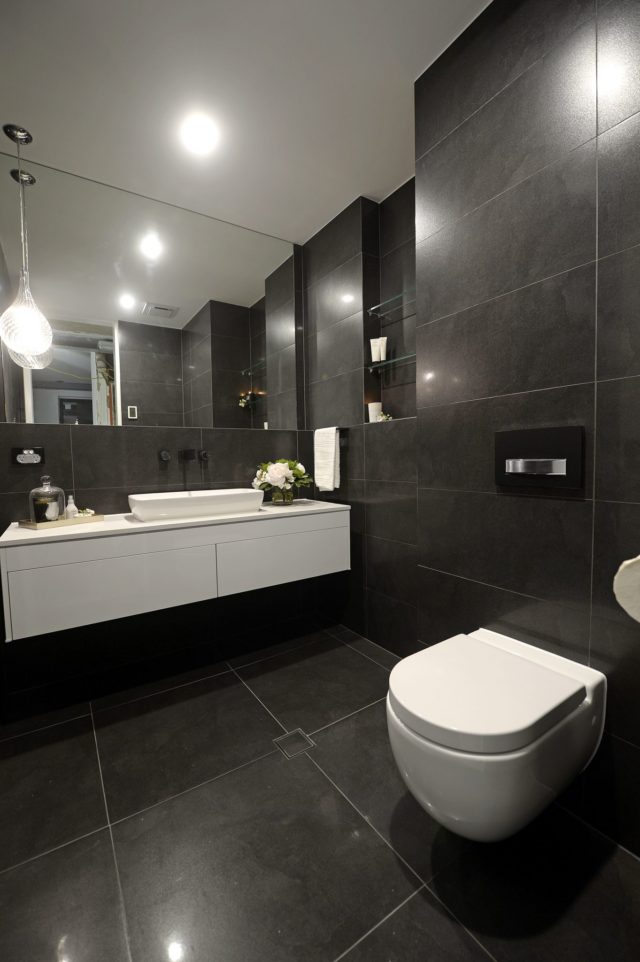 It was compliments all round for the laundry too. Darren said it felt well finished, resolved and really beautiful but needed better paintwork. Shaynna said a laundry chute would have been nice. Darren said he was very confident that they were on the right path now. 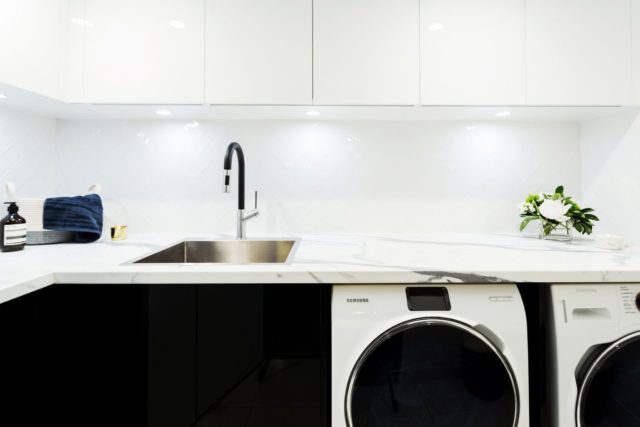 They all agreed the cellar was a serious cellar and they had put a lot of time and money into the wine collection. Neale said it was impressive in its simplicity. Shaynna preferred a moodier cellar and said that there were too many lights. It was all going so well until they realised how dangerous the glass door with no stopper was against a concrete bulkhead… 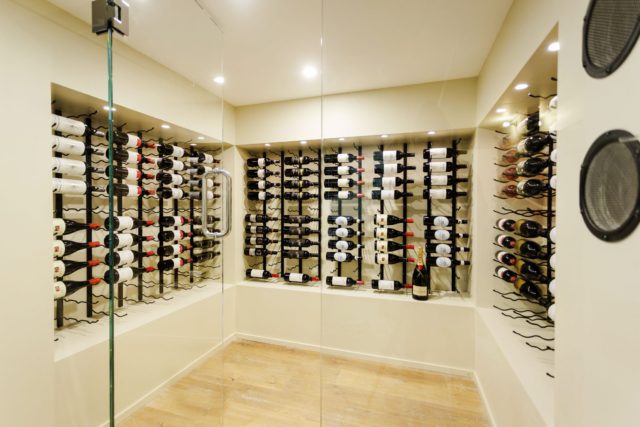 Neale and Darren and Shaynna loved the light and bright powder room and the restraint in only putting hex tiles on one wall! They thought the sliding door was a smart move.

Our pick to buy: Sigma mirror. 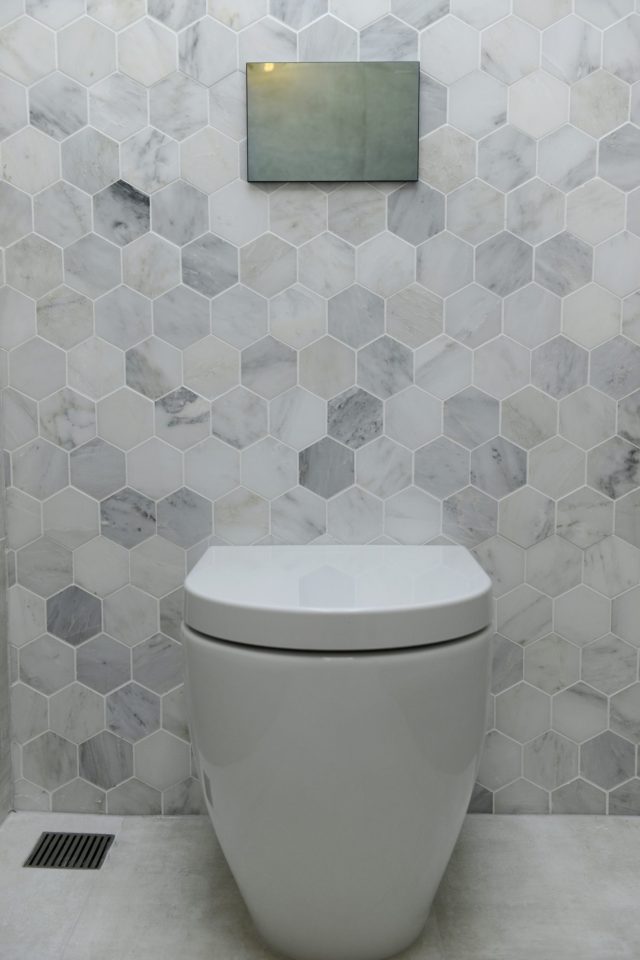 Onto the laundry. Neale loved it and said they had their confidence and mojo back. Shaynna liked the overall functionality but noted there was nowhere for an ironing board. 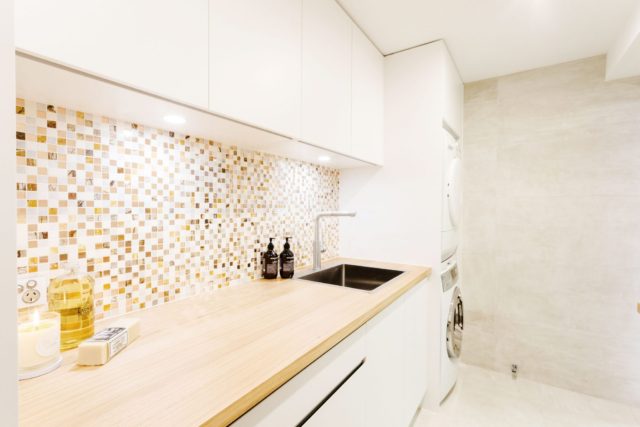 And in the cellar it got controversial! (Come on, all those compliments and agreements were getting kind of dull!). Darren thought the idea of drinking down there at a couple of stools facing the wall was ridiculous and reeked of a lonely afternoon! Neale really liked the idea of it though. Darren said it was a step back into the mid-nineties. Shaynna said it didn’t convey the same feeling of luxury as the laundry and power room. Darren hated the paint colour on the walls and Shaynna said they weren’t romancing the buyer and it was like a basic storage cabinet. Neale argued again, saying he felt very comfortable in there. They all agreed the painting was a mess. 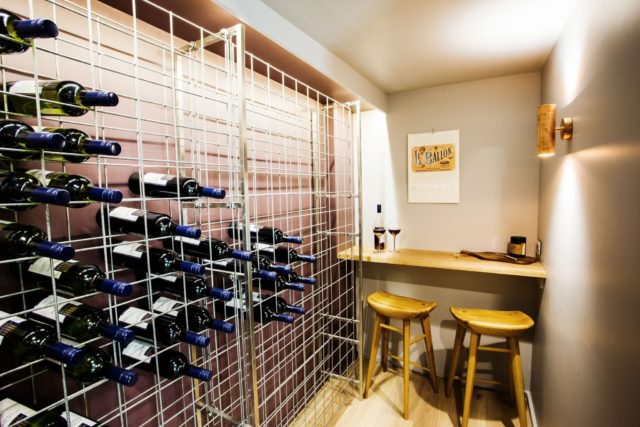 Darren & Dea: WINNERS by half a point!

They all loved the powder room on first glance and Darren said Dea had a really refined eye for detailed design. Shaynna said the styling was beautiful and details gorgeous but the painting was bad quality. Neale said poor finishing was particularly inexcusable for the Double Ds because they’d been there and done it before. 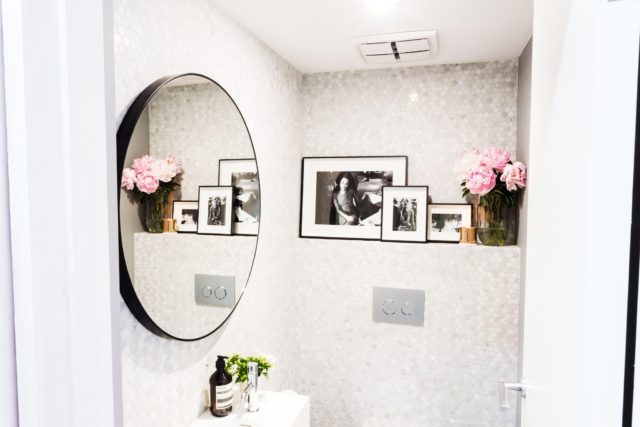 Shaynna thought the laundry was beautiful, especially the benchtop. And when she finally found her first laundry chute she was over the moon! Neale said it was simple but oozed luxury. They loved the storage room too. 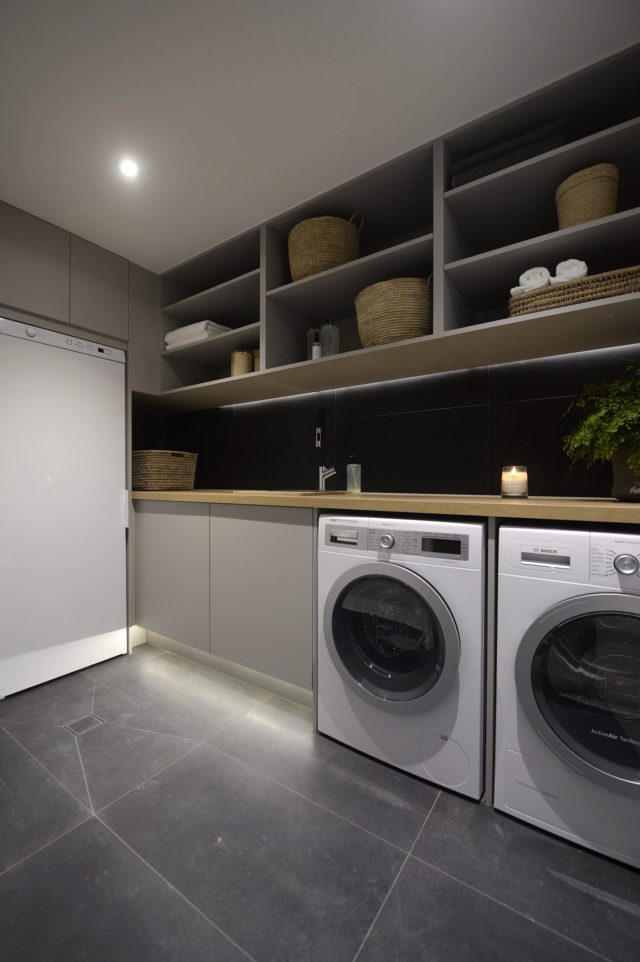 Of course they couldn’t fail to be completely blown away by that amazing cellar! Shaynna realised it was the same storage system Ayden and Jess used but because it was full of wine and painted the same colour as the wall it looked much better. She said it was beautiful. Neale said they’d now seen three great cellars and one amazing one! Shaynna said it was too warm for keeping wine but visually absolutely stunning. 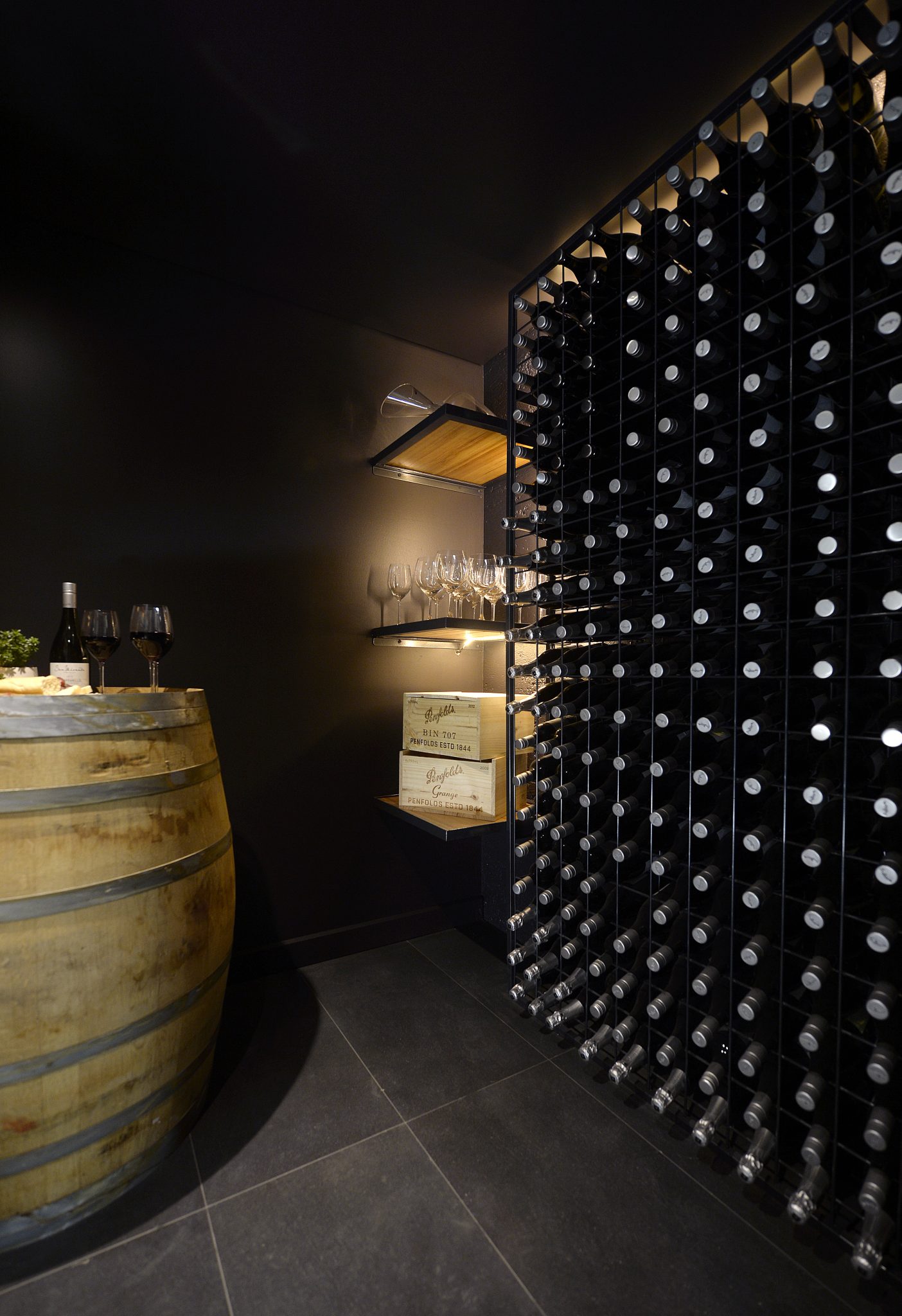 What did you think about the triple reveal? Did the right couple win?