While a second-generation family business isn’t exactly a unique proposition, when the business inhabits a traditionally male-dominated sphere and is run by four sisters, one can’t help but take notice. The children of Italian immigrants, the Di Lorenzo sisters (Tina, Maria, Diana and Belinda), preside over a Sydney tile empire started by their parents almost 40 years ago. And while always a successful business, it was when the daughters assumed the reins that it blossomed into the large, multi-site offering that we see today.

“The Di Lorenzo tile business started in 1983 and I remember spending every day there after school and on weekends. Dad would make us clean the tiles for pocket money which we didn’t like very much!” says the marketing manager and eldest sister, Tina Di Lorenzo. But all that exposure must have had some effect because years later, after all the girls had gone to university and pursued different careers (a move encouraged by their father), they began to see much more potential in the business.

“I had been working in marketing and was between jobs. Initially I committed to three months and that was 26 years ago!” says Tina. She joined the business in a full-time capacity about six months after her sister Maria who had resigned from her position as a chartered accountant at Ernst & Young. Both women could see a lot of untapped potential in an industry that was rapidly changing.

“Tiles started shifting from being a purely hardware product in grey, beige and white to something much more interesting. The Italian reps came and visited and showed us this whole new world of tiles,” says Tina in explaining the genesis of her enthusiasm. Up until that point, the tile scene was constrained by a couple of factors – not only was tile importation quite difficult, but the Australian market was smaller and more conservative.

Eventually, the remaining two sisters followed suit and joined the business full time. Diana, who has degree education and previously worked as a high school English teacher, is now the company’s retail showroom manager, overseeing the five Sydney locations. The youngest of the four, Belinda, has a fine arts (production) degree from NIDA and is the company’s retail merchandiser.

Upon taking over from their parents, the first project that the older two sisters oversaw was the design and build of a large showroom and warehouse – the beginning of the business’ transformation. “When my parents had the business, the showroom was nice, but it was a standard showroom. Dad was looking to build quite a big showroom and warehouse facility and asked us to design it,” says Tina who subsequently hired an interior designer to complete the job which was previously unheard of in the industry. “The showroom was like nothing you have ever seen before in Australia. We like our showrooms to be practical but also beautiful so that people are inspired to create beautiful rooms with our products.”

Gorgeous products aside, stylish showrooms are possibly another key to the Di Lorenzo success story given it’s mainly women that shop for tiles. “70 percent of our customers are female and many of our Italian suppliers have commented that our business has quite a feminine feel to it. This can be seen in many ways but particularly the way that we change our showroom merchandising every six months,” says Tina.

But while the store’s customers are chiefly female, Tina still sees the tile industry as overwhelmingly male dominated, possibly due to old-fashioned patriarchal ideas about lineage. “There are a lot of tile companies in Australia and the majority of them are family businesses that have been handed down to the sons,” says Tina. Obviously, with four sisters in the family, that wasn’t really an option for the Di Lorenzo parents!

As with any family business, there are differences of opinion but it’s lovely to hear that quarrels are few. “We get along really well and have respect for each other. We all trust each other in what we do which is first and foremost part of our success. We’ve not always agreed on decisions, but we will always support each other in whatever the majority decides,” says Tina, who explains that the sisters have never had a falling out – possibly because they don’t all work under the one roof.

With the business requiring each sister to work out of a different location, they have a monthly business meeting and talk on the phone daily. And as for whether they see each other out of hours? “We actually spend quite a bit of social time together.” 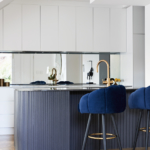