Hoorah for all three judges ‘proper’ this week: Neale, Shaynna and Darren! And definitely the most entertaining judging of the series so far. Loved it! Didn’t those Jimmy Possum challenge beds (I wasn’t a fan!) cause trouble?! There was also much talk about just how much inspiration Tim and Anastasia had taken from Darren’s mentoring session (perhaps too much?) and then there was the Neale and Shaynna fallout over Dea and Darren’s room. And to top it all off, Darren pointed out that many of the things in Dea and Darren’s room were exactly the same as those he had used in Jennifer Hawkins’ home, which is featured in his book, prompting Shaynna to ask who was the copycat now? 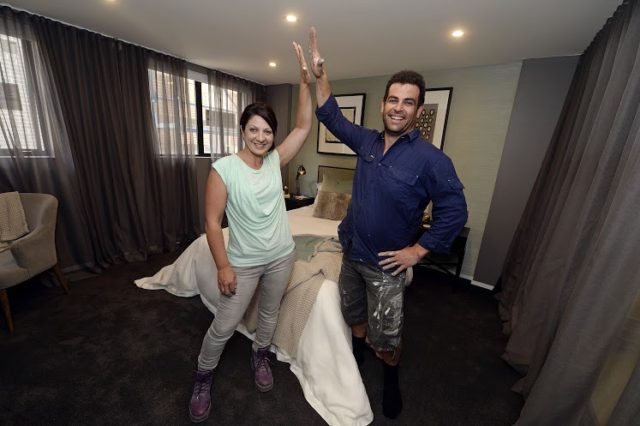 But ultimately, Tim & Anastasia came first, beating their besties Dea and Darren by half a point despite them having taken a point off them due to winning the bed challenge. Here’s a recap of the judging… 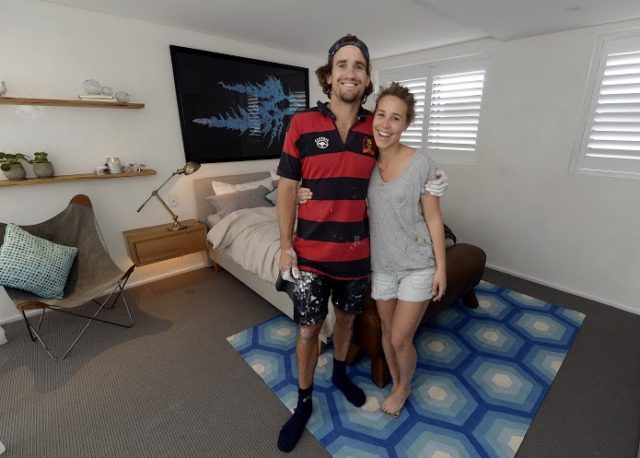 Shaynna’s first impressions were “very crisp” and Neale said it had a beautiful colonial feel. Darren agreed it was a lot better than their first bedroom.

That bed was dividing though. Shaynna found it too messy. Darren loved the unmade look. But then Shaynna talked him round! And Neale said in South Yarra people make their beds! But he loved the colour palette and called it absolutely beautiful. 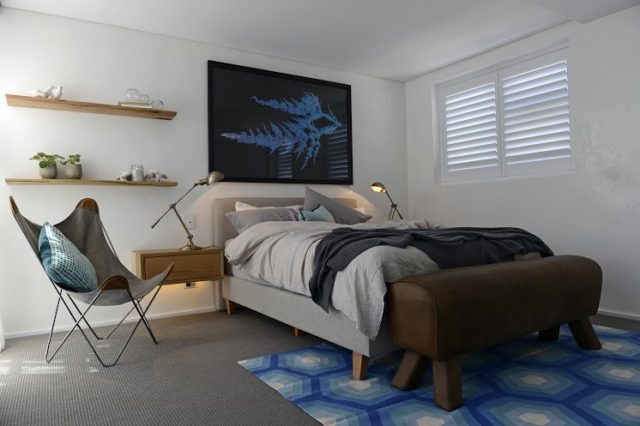 Controversially, they didn’t use their Jimmy Possum bed from the challenge because it didn’t work with everything else. Not that the judges knew anything about the challenge. The show left us thinking this is something they’re going to regret later! Big time. Eek!

Neale found the styling a little twee but Darren dug it! Shaynna said the lighting plan was perfect. It was all going so well until Shaynna pointed out the bad finish on the windows (whoops, Charlotte!).

Shaynna said they had their confidence back but Neale said it still lacked some of the energy and oomph he saw in the elimination rounds.

Tim & Anastasia: WINNERS by half a point! 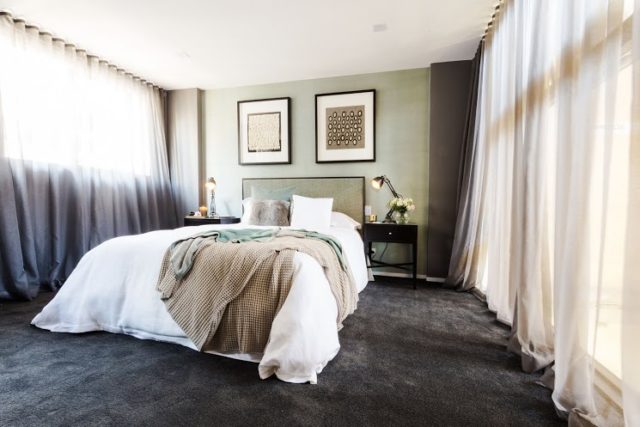 “They have come on quite a journey since the cat,” noted Neale! Darren couldn’t get the smile off his face and was amused by the use of seagrass wallpaper… again! But was it a happy smile? Hmmm… He wasn’t sure how he felt about the replication of ‘his’ mentor room. He also thought the cushions were a little expensive for a guest room!

They loved the built-in dressing table and the carpet. Darren said the linen was better and not cheap and nasty like the first bedroom. Neale said they’d taken much more than the grasscloth from Darren’s mentoring sessions. But they all loved the black windows and the window treatments, including electric blinds. 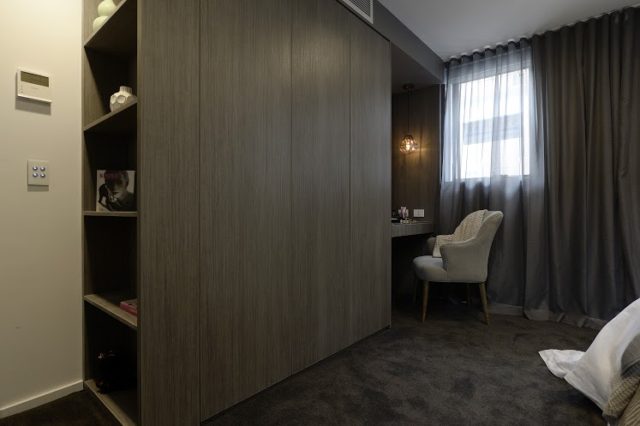 Sadly, the switch hidden behind the bed (due to using the challenge bed rather than the one they had already bought) wasn’t missed! Neale said the style was suited to an older buyer but they needed to run with it now for the rest of the apartment. 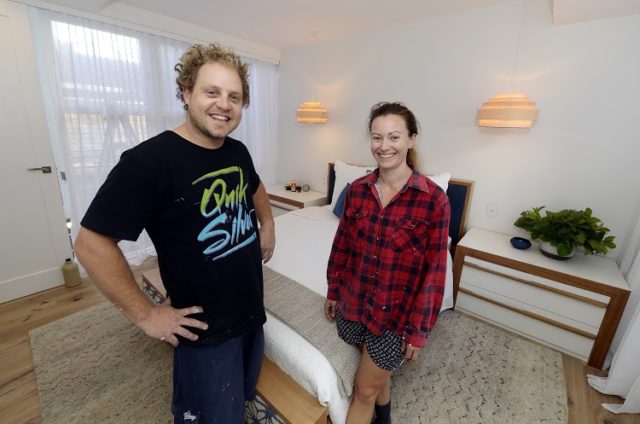 Despite a mentoring and shopping session with Neale this week, it wasn’t a great week for these two. The judges found the lights were hung too high and there was no focal point. When they removed the cushions hiding the Jimmy Possum bedhead, they actually liked it! Eek! Darren thought the wardrobe was too small even though the room was designed for guests, as you might want to change its use later on. 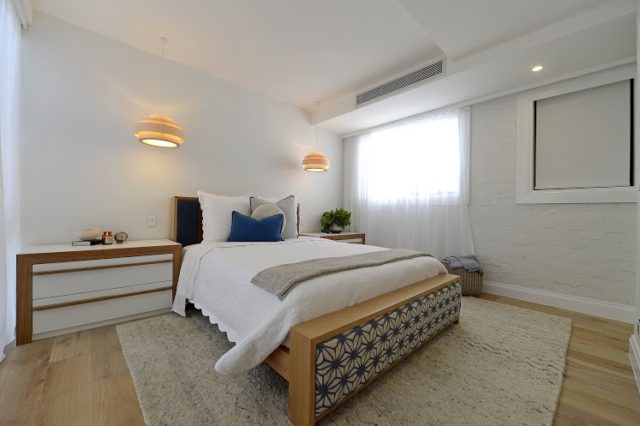 Neale said the custom bedsides were oversized to compensate for the wardrobe. And he found everything styled on them way too small, saying he could see no evidence of the things he and Jess had discussed on their shopping trip in Sydney. It left him saying the room was lacking personality despite having a good finish and not being a bad room. And it didn’t say South Yarra. 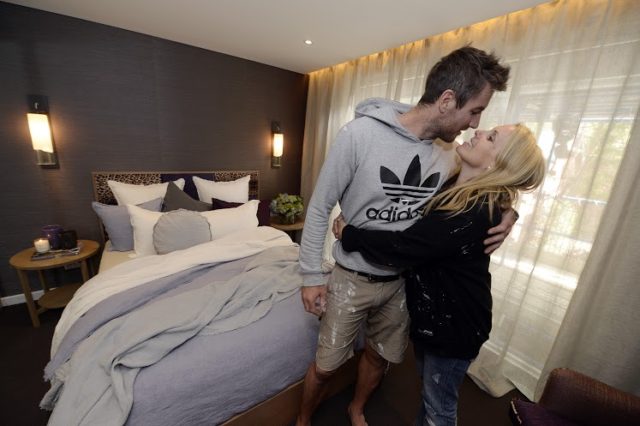 “Welcome to The Block Grasscloth,” quipped Neale. “What have I done?” asked Darren. Shaynna didn’t see all the fuss, declaring that Dea didn’t invent grasscloth wallpaper! Darren said it was executed beautifully but didn’t like the powerpoint below the art.

Neale found the whole room very appealing and if he had to check into a boutique hotel room in South Yarra this was what he’d expect. Darren loved the colour palette and the execution. 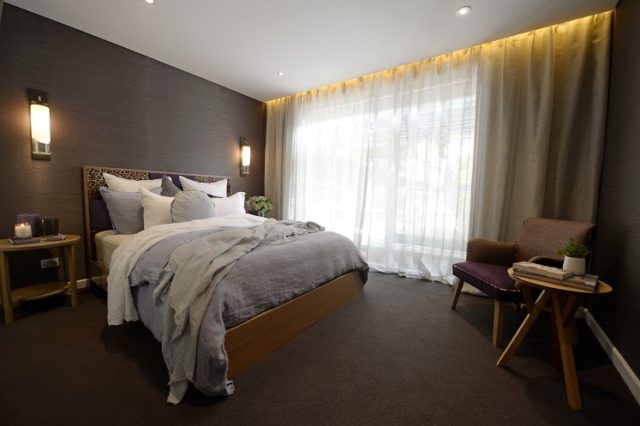 [contextly_sidebar id=”g83yqkS54nVYEXKAf4CVNTGafLoe0gmO”]But then Shaynna made a face and called the bedhead (the challenge-winning one) HORRENDOUS and so over the top it was ridiculous! She also thought the wall sconce lights didn’t work and were too industrial.

Neale however, said he bloody loved it, including the leopard print, and found it sexy. And then began an argument between Shaynna and Neale that did make me chuckle! Darren was left somewhat awkward and amused in the middle! I loved how they both stood by their opinions. Neale called it genius and Shaynna called it gaudy.

Darren then went on to list everything he had used in Jennifer Hawkins’ bedroom, seen in his book, which had also been used in the room. Say no more.

Most entertaining judging of the series so far if you ask me! What did you think? I’m pretty much in agreement with the judges this week. There wasn’t much between the top two rooms, Josh and Charlotte’s was definitely next best and my favourites, Ayden and Jess, just didn’t come up with the goods this week, I’m sad to say.

All our Block posts in one place.