Well well well, what a night of room reveals it was! Some great rooms and all very different, which impressed the judges. As Neale said: “All four have a very distinct personality and stand out for different reasons. It’s the most memorable master bedroom week I’ve experienced on The Block.”

That wasn’t all though; the results of the wine audit were in and a very smug Dee and Daz (fair enough) were shown to be NOT guilty! Then, at the end of the show, we saw Charlotte and Josh, after receiving the series’ first 30/30 from the judges, being disqualified from the scoring because they’d broken the rules by not using their Jimmy Possum bed from the recent challenge. Those bloody beds! As I keep saying on Twitter, never have I seen more of a PR fail for a brand on the show. I feel really bad for them! Couples either did their best to disguise their beds or didn’t want to use them at all. Eep!

Charlotte and Josh (30 out of 30, first place, had they not been disqualified) 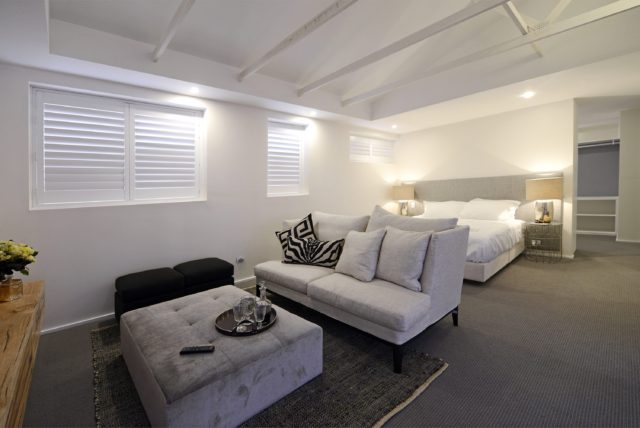 I really liked this room and its lounge area but didn’t feel it quite warranted the perfect score it got from the judges, much preferring Dee and Daz’s overall. It was all a little too white for my liking and felt like it needed another layer or too. But not wanting to take away from the young couple’s glory, it has some great points.

They all loved the automated blinds and lights, especially tech-savvy Darren. Neale said it felt like Josh and Charlotte at their absolute best and they had created something like a self contained apartment or suite. 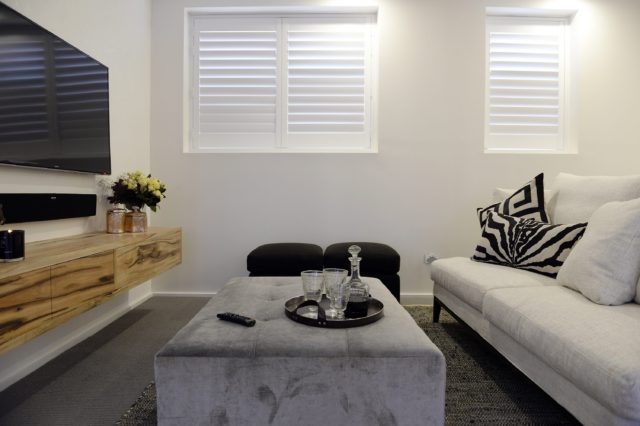 Shaynna closely inspected Charlotte’s paint job on the windows and was super impressed, saying they’d really worked hard. “This is their shining star, the pinnacle, what will have buyers in a bidding war.”

The massive walk-in wardrobe almost made Shaynna hyperventilate and generally went down really well, aside from the pendant light, which Darren said was a bit too Silence of the Lambs for his liking! Charlotte, born in the 90s, had never heard of the film. Bless! 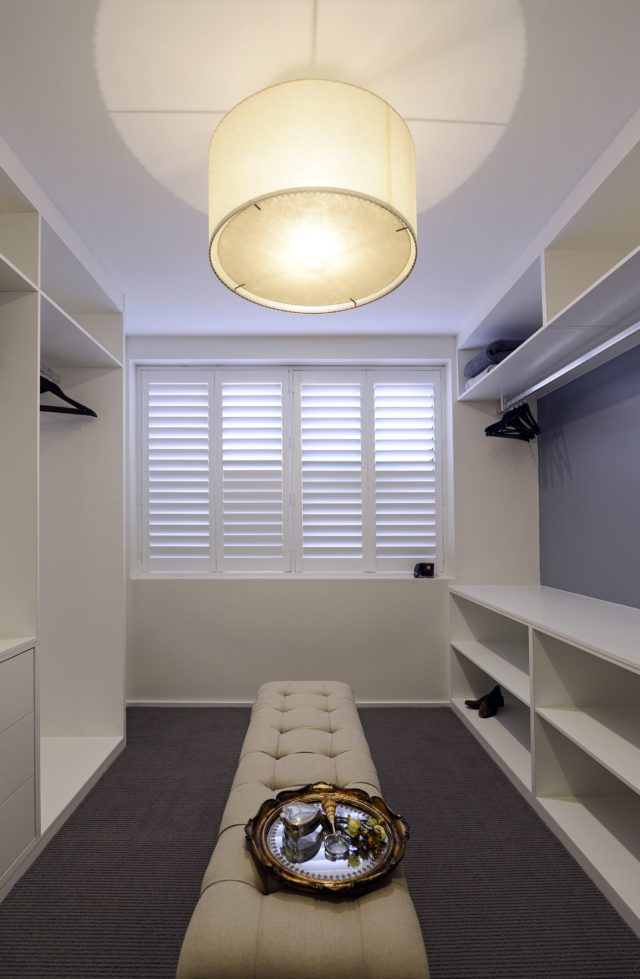 Our pick to buy: Ingrain floating entertainment unit (by the same people who supplied their bathroom vanity last week).

Tim and Anastasia (24.5 out of 30, tying second place with Ayden and Jess) 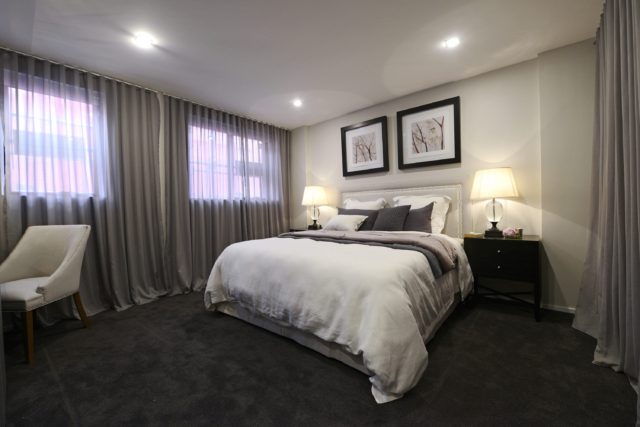 I agreed with pretty much everything the judges said about this one. It was, on the face of it, a gorgeous, luxurious, cosy room.

Shaynna said it was beautiful and she loved the colours. Neale said he’s never been convinced they had confidence in their own style but this room maybe proved him wrong. He called it a gentle room with nothing in it that anyone would dislike, with a colour palette just enough to keep it modern.

Darren, perhaps diplomatically, said it was appropriate and saleable but didn’t seem overly excited and was intrigued that they hadn’t carried on the grasscloth wallpaper theme. He was concerned it was too similar to their first bedroom. 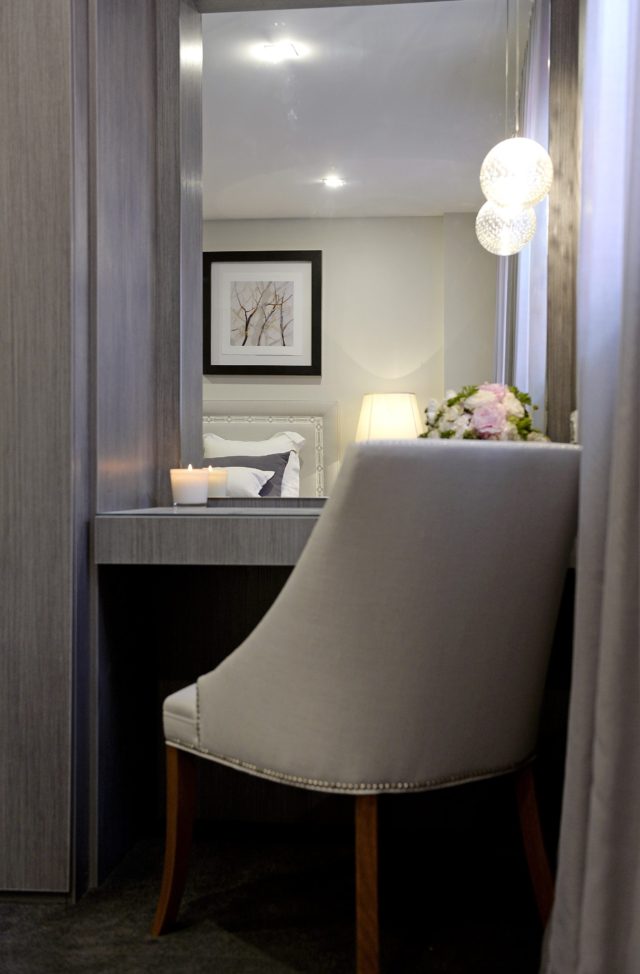 Shaynna kept it real though, pointing out that the curtains, while beautiful, needed channelling into ceiling and that the artwork above the bed too heavy (I totally agree, especially with those black frames).

The two-way doors to the walk-in were praised by all three as being clever. But while it was a good use of space and cabinetry, Neale said it felt a bit too much like a shop and he wasn’t sure about laminate, finding it grey and depressing. “It doesn’t feel luxurious. I’m underwhelmed.” 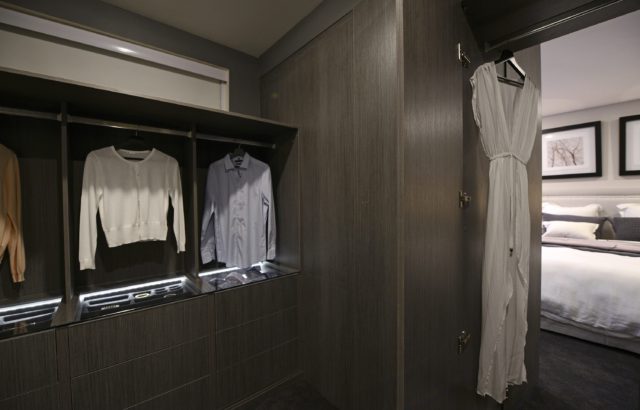 Darren also spotted a gaping hole near the window. Oops. 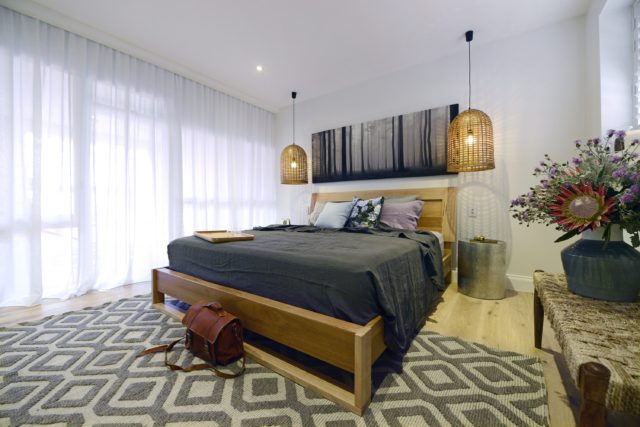 This room drew mixed comments from the judges, with Neale being a bigger fan than the others. He said they were getting bolder with each passing week. Shaynna said it was like a younger version of Tim and Anastasia’s apartment.

Darren wasn’t exactly doing cartwheels and said he didn’t love it and it felt like a great second bedroom, not a master. He went one further to say it seemed “kind of juvenile” and unsophisticated. I totally agreed that the drum bedsides with no storage weren’t right. And I also agreed with him wanting to throw the artwork above the bed out the window. It looked too cheap and generic. top marks for personality, texture and layering though, I’d say! 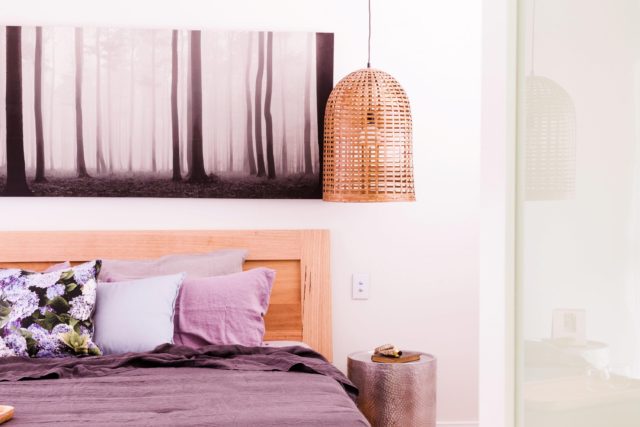 Darren loved the wardrobe however, saying it dragged (interesting choice of word!) the bedroom up a level! I’m starting to see what he meant in our recent interview when he said he was going to be less Mr Nice Guy this series and more “cranky Daz”! 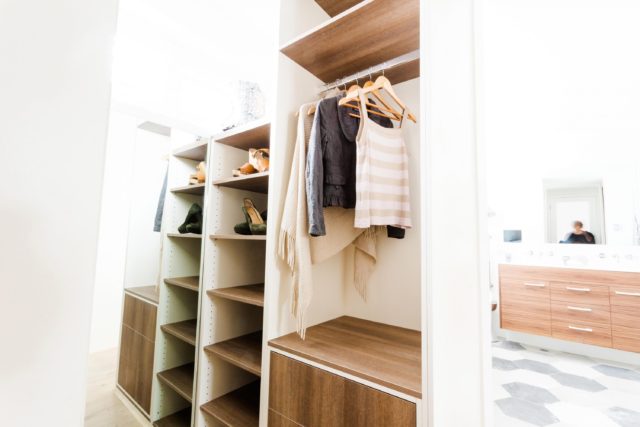 Neale finished off on some nice positives though, saying they’d got over their initial fears and misgivings and he wouldn’t change a thing. 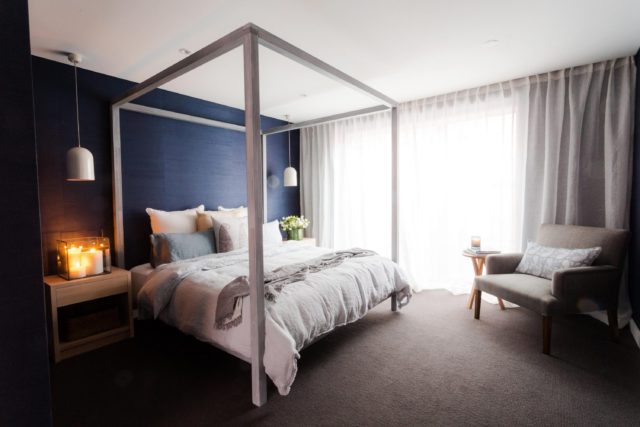 Pow! This really was on another level to the others and I’m not sure why they scored less than Charlotte and Josh. So, at the end of the day, in my opinion, the most deserving couple won the 10 grand. The dark , moody grasscloth, the grand but contemporary four-poster, the perfect styling. Dodgy finishes aside, it was a cracker! 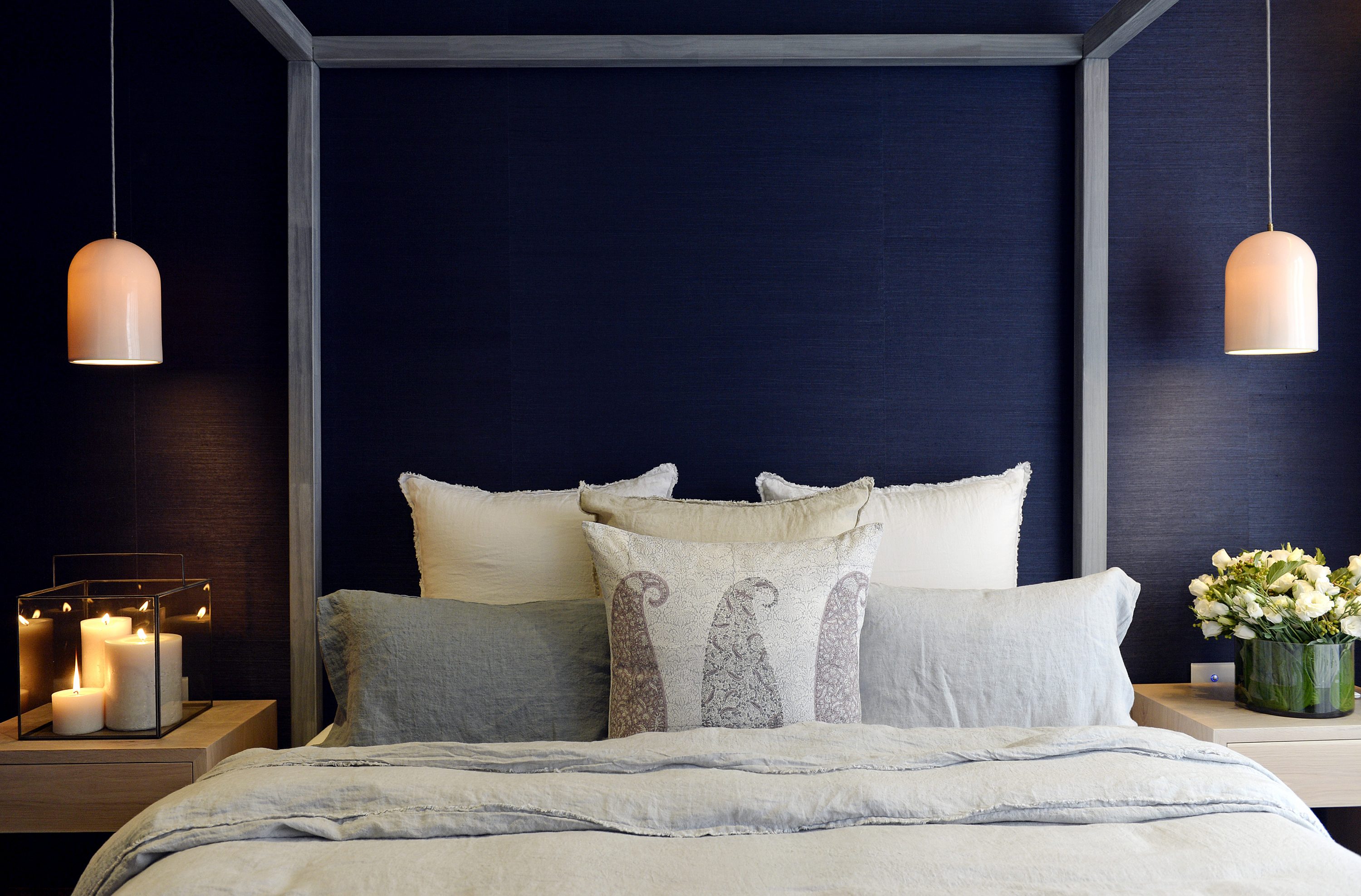 Darren was pretty much dancing around and trying to hang off the bed, he was so excited! “Woah, I love it! This is my all time favourite colour of grasscloth.” He loved the scale of the bed too.

Neale simply said: “Nailed it.” He added that it walked the line between really contemporary and classic, which is what Dee and Darren do again and again, and that it was finessed to a different level. Shaynna agreed it was gorgeous and felt like it enveloped you. 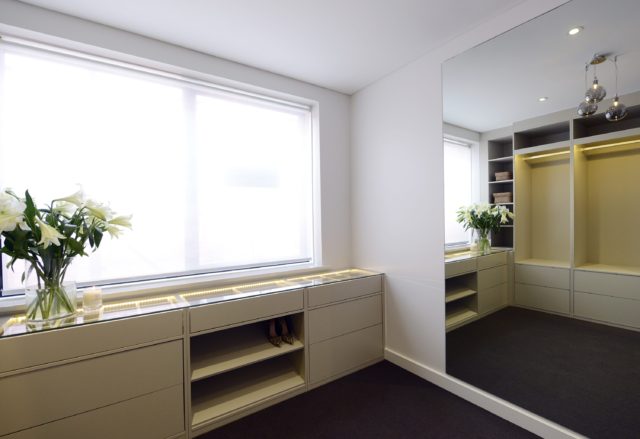 First impressions of the robe were great, with Darren loving the LED lighting and Neale, the choice of pendant light. They all noted a few finishing issues though, with Neale saying it was a little rough around the edges. Shaynna said the lack of blockout blinds and privacy were letting down a near perfect room.

With kitchen week now upon us, I’m excited! Which was your favourite this week? Did Charlotte and Josh deserve a perfect 30? Was their disqualification too harsh?