Well, it was a night of mixed reviews and plenty of drama and whingeing, was it not?! But I’m very glad the boys took out the top prize and I think they deserved it. I can’t help but like these two; they’re so much fun and they seem to be genuinely nice guys. But I can’t not mention Dee’s super harsh bitching about Shaynna at the end of the episode. Definitely a step too far in my opinion. I’m a big fan of Dee and Darren’s style but the attitude I’ve been trying to ignore is bugging me now.  Anyway, back to the important stuff: the design!

Poor Carlene and Michael and their lack of a door! Thank goodness the judges could at least see they intended to have one! Darren said it was very glassy (yes glassy, not classy!) and fitting for the Block Glasshouse. Neale loved the joinery, sink and benchtop but found the room a bit cold. Shaynna said the pendants didn’t really work and they would have been better off with something in a timber finish. Darren, on the other hand, said he wouldn’t change anything and they’d done a really amazing job. And let’s just not talk about the dried flowers… 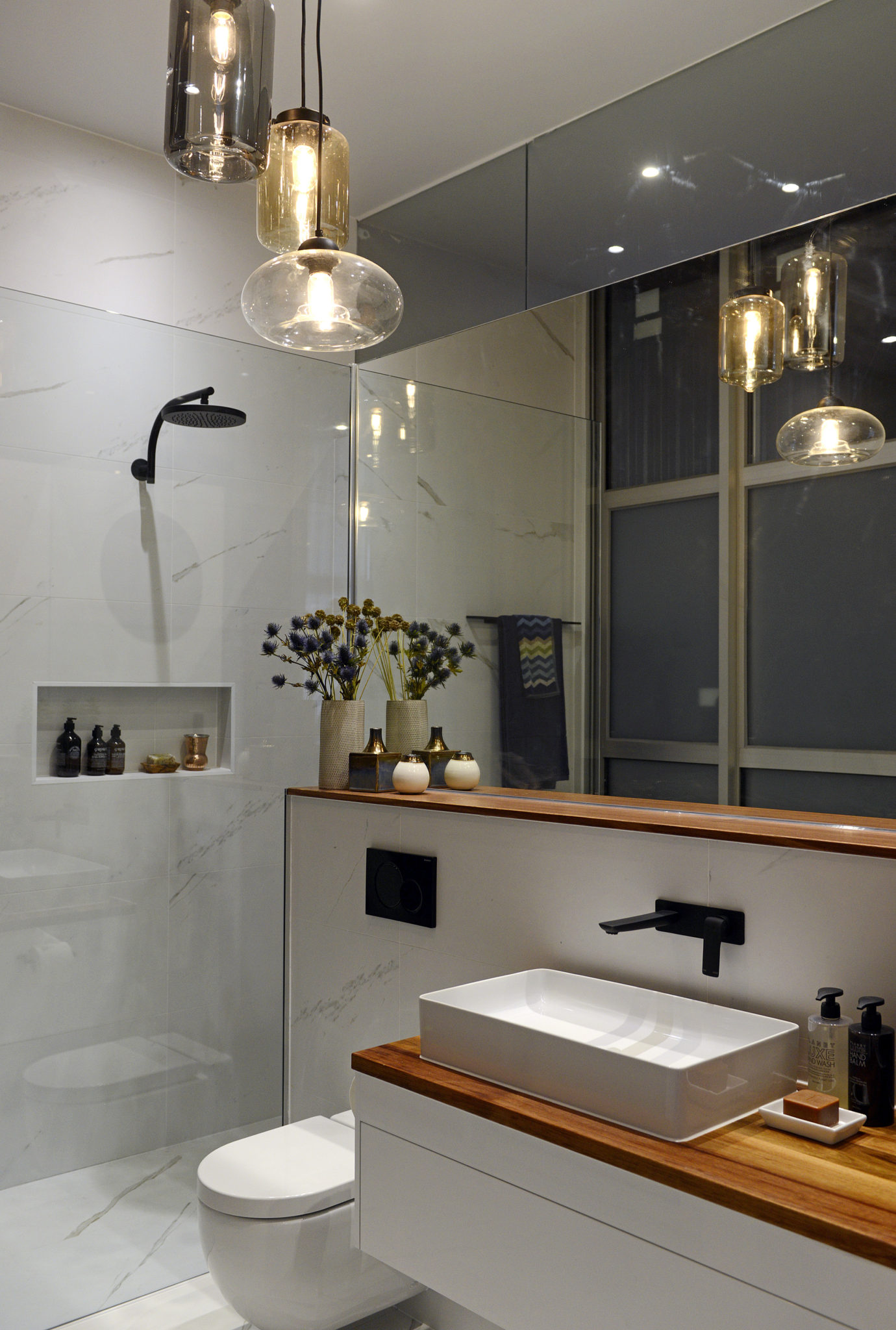 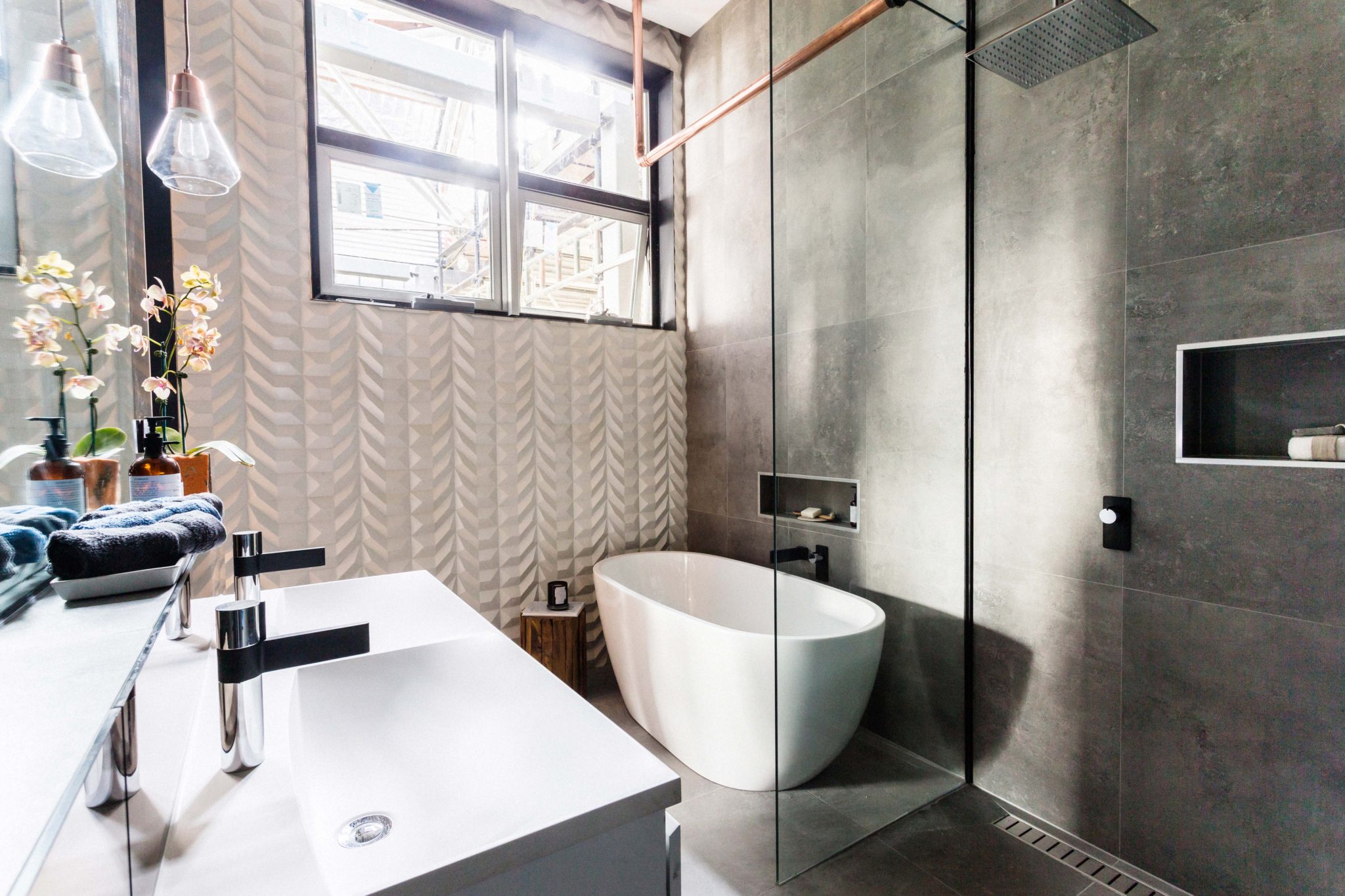 This bathroom made Carlene and Michael’s missing door seem like nothing! Although it was full of great features, the judges couldn’t ignore the fact it was seriously unfinished (despite them carrying on working for 10 minutes after Scotty blew the whistle (naughty!). Shaynna loved the texture and shadows of the geometric tiles. I’m still undecided. I love the concept of 3D tiles but I wasn’t loving the scale of these. Brave choice though, good on them.

Everyone loved the exposed copper pipe leading to the shower and the fact that there was a bath. But as Neale said, you turn one way and it’s a bathroom by the contestants who got 30/30 for their main bathroom and you turn the other way and it’s a mess! Neale said they’d tried to do too much and incorporate too many ideas while Darren said he could see its potential and it was a real shame it hadn’t been finished in time. And just to put the boot in a little more, Shaynna and Neale both agreed the styling was really bad. Awkward! 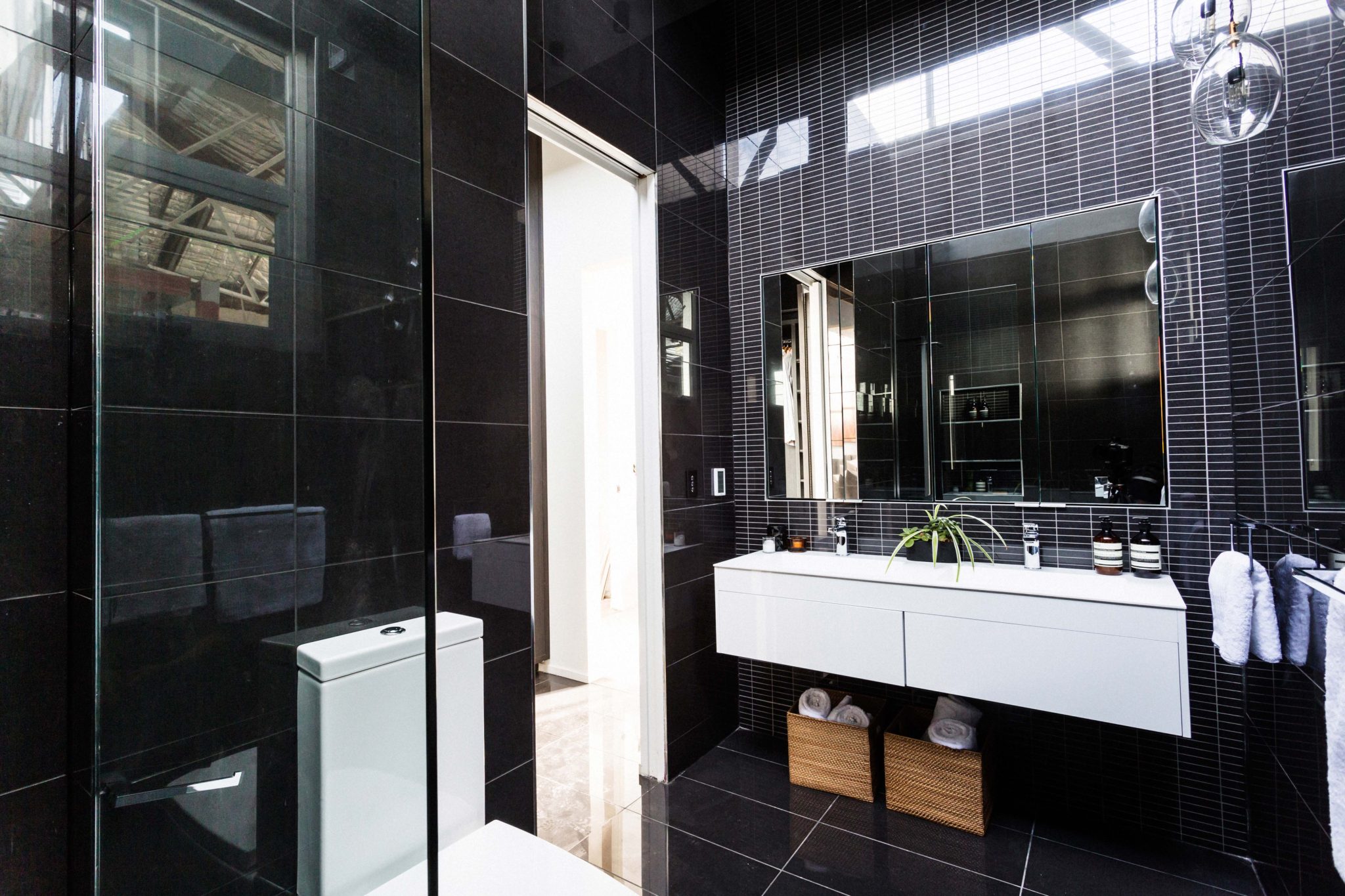 It started off well with Max and Karstan’s reveal but very quickly seemed to turn sour. Shaynna said the room left her cold and felt a bit clinical. Neale said it was very hard. Mr Nice Guy Darren said it flowed very nicely from the en suite with its simple palette, while Neale said it felt dated. Darren made a big deal of the lighting and said the pair always make great choices in that department. He said it felt consistent with the rest of the apartment but didn’t appeal to him personally. I actually really liked its gloss and hotel feel. I also like a dark tiled bathroom. And not just because I think it will hide dust… 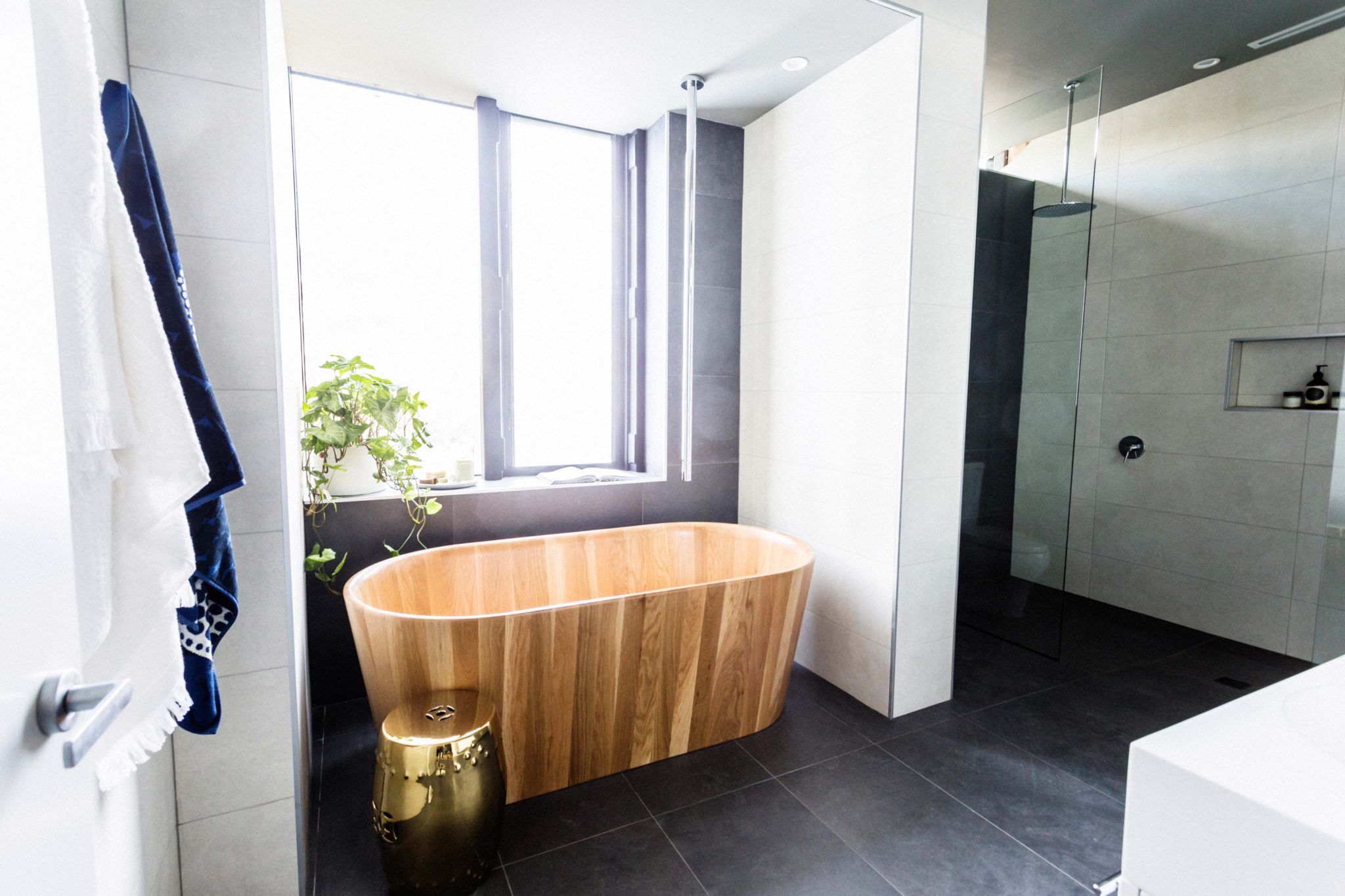 Well of COURSE they all loved the timber bath. “Oh my God, that’s awesome,” said Shaynna, who loved it so much she kicked off her heels and hopped in to try it out for size. Neale said the boys had absolutely nailed it and Darren said it was really really good. It was quite obvious the boys were going to win. Shaynna said it felt like a high end hotel suite and all the judges agreed this bathroom would become a key selling point for their apartment and something buyers would go crazy for. I absolutely loved this bathroom and think it totally deserved the win. I am a real bath lover and that timber tub is now on my dream house wish list! 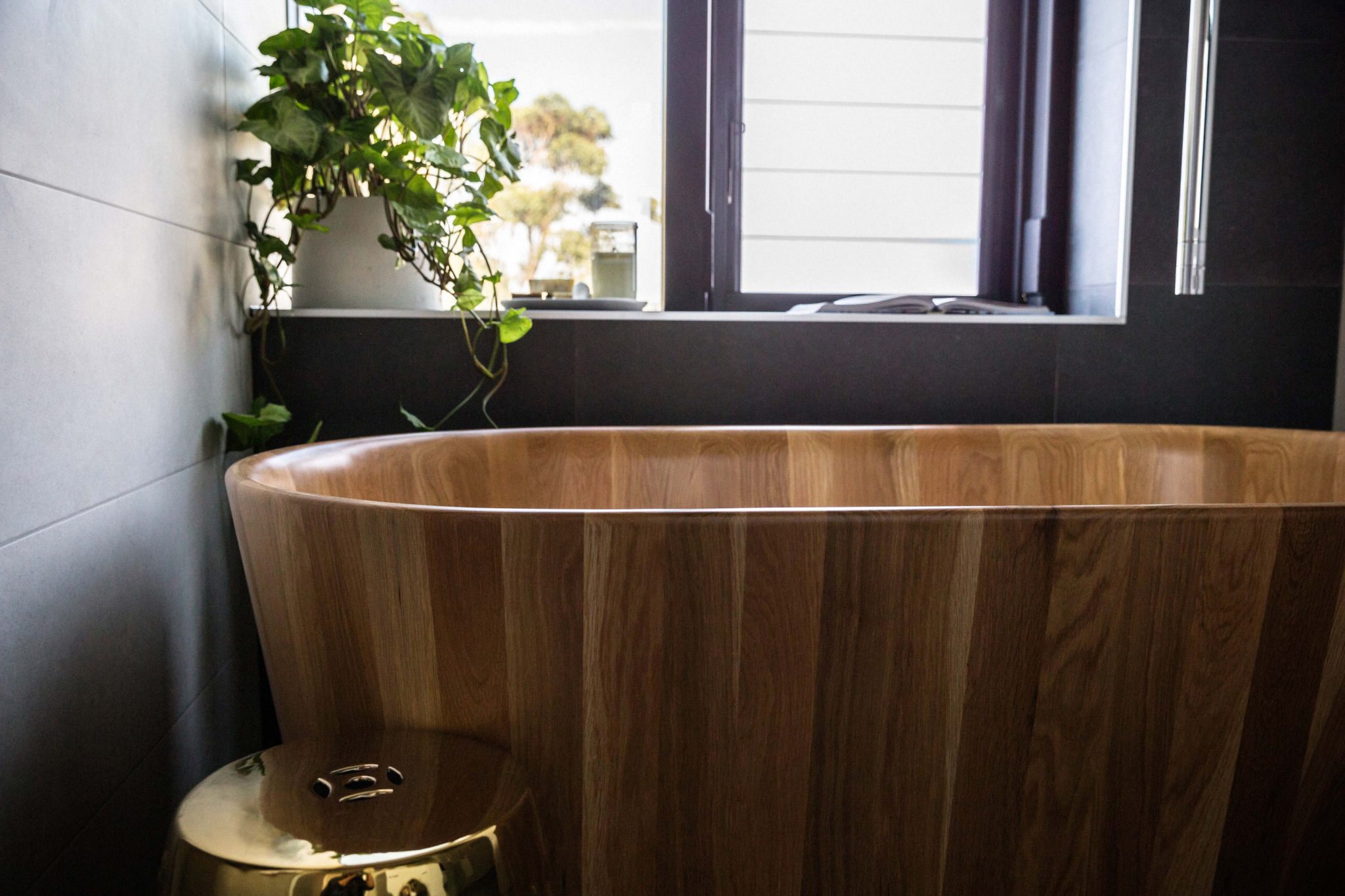 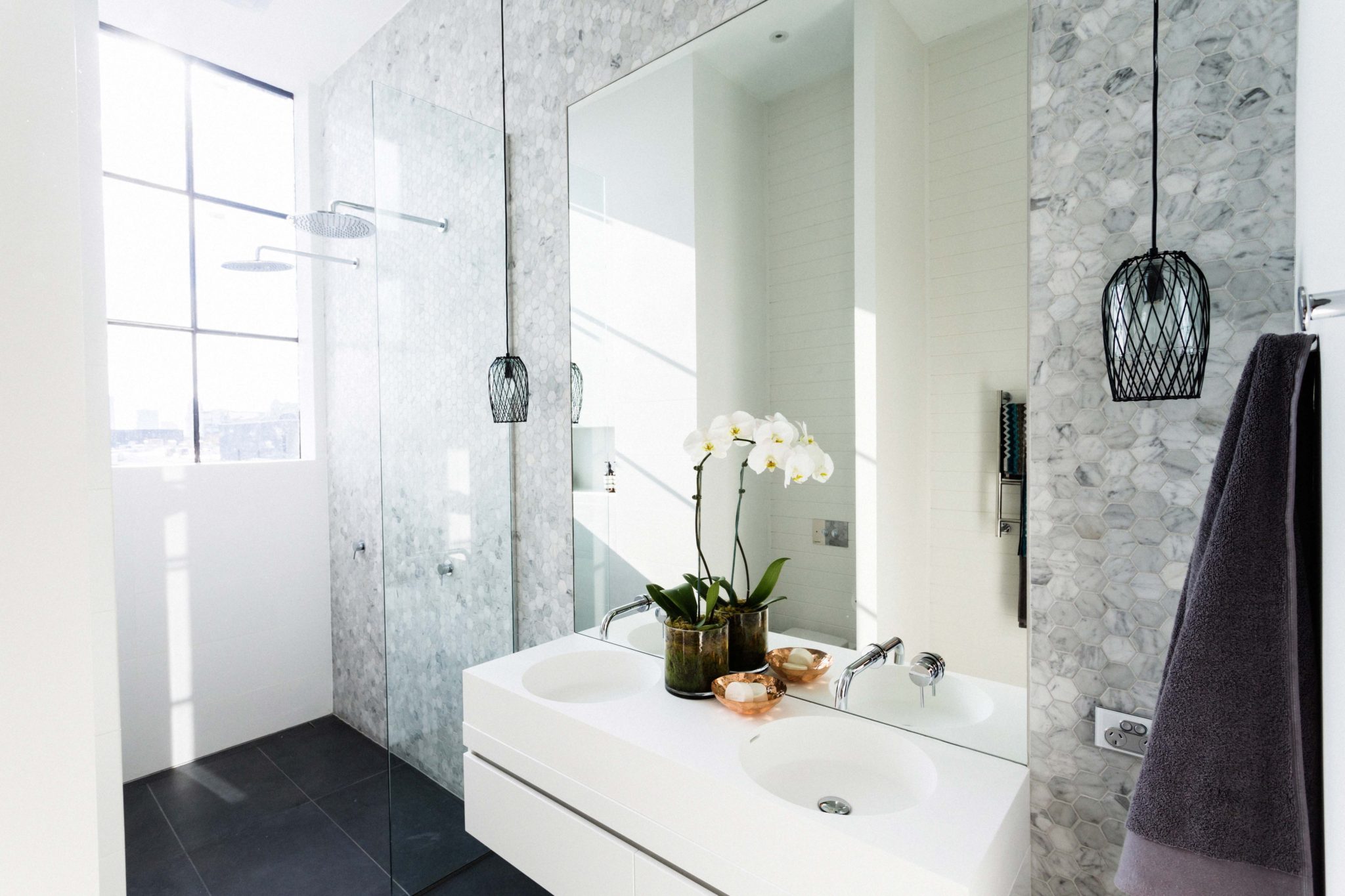 It may be small but Darren and Dee’s en suite looked pretty perfectly formed to me. Darren said it took your breath away but in a really gentle way. Neale said it was just beautiful. But Shaynna said there wasn’t enough storage (which did not go down well with Dee: understatement of the year!). 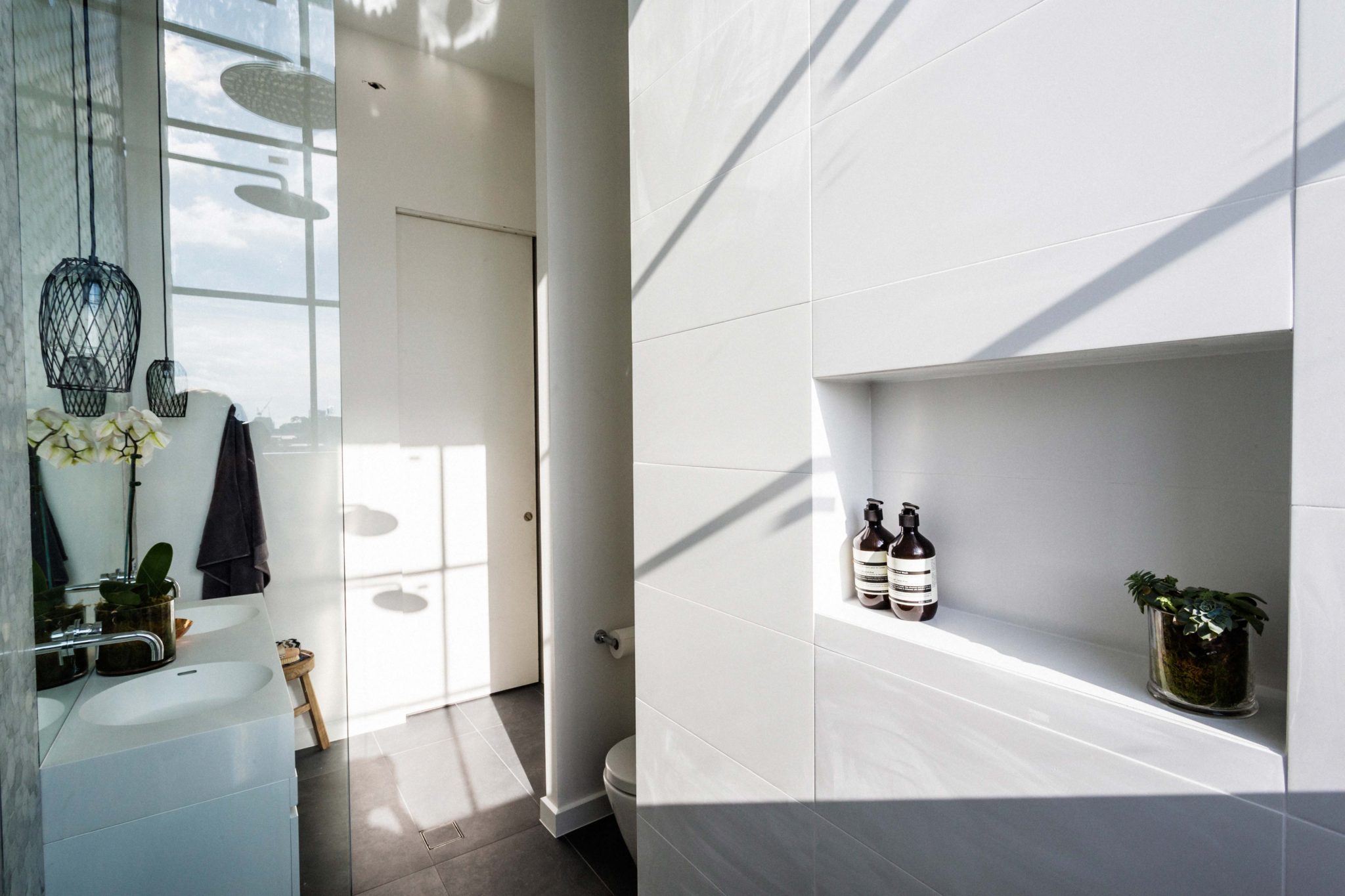 I’d love to know which was your favourite and what you thought of Chris and Jenna’s 3D tiles and the boys’ timber bath?