As someone who has just made all the final selections for my own (main) bathroom reno, starting soon, I watched these Block reveals extra closely and let’s just say I felt pretty good about my decisions after the judging!

I don’t want to be mean but boy, that real estate agent (and trained tiler) Jesse was cockier than ever this week, wasn’t he? And then he and Mel came… last! Just saying…

Overall though, I thought it was a really impressive week and I liked three out of five bathrooms a lot (a combo of Mitch and Mark’s and Andy Deb’s might even be my perfect bathroom!). I also agreed with the judges on most of their comments and scores. So, let’s recap! 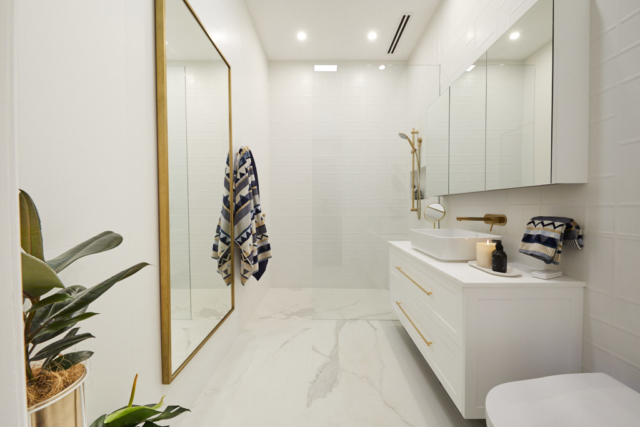 Mitch described it as: “The week from hell, the best week of my life and the week of achieving the unachievable.” And didn’t they do well?! I really loved their understated glamour bathroom; a vision in white and gold! And, just like last week, it scored them second place.

Shaynna said it was very impressive and she loved the styling. All the tiles were absolutely stunning

Darren said it was a really stunning palette and he liked the remote control toilet. Shaynna however said it was unnecessary in a guest en suite and they needed to measure where they spend their money.

Neale said he felt like he’d stepped into a 1940s film set with Hollywood glamour. “It totally demonstrates the power of the old cliche, less is more.”

The paintwork left a little to be desired. In fact, maybe two coats! But that was Darren’s only negative about the room. 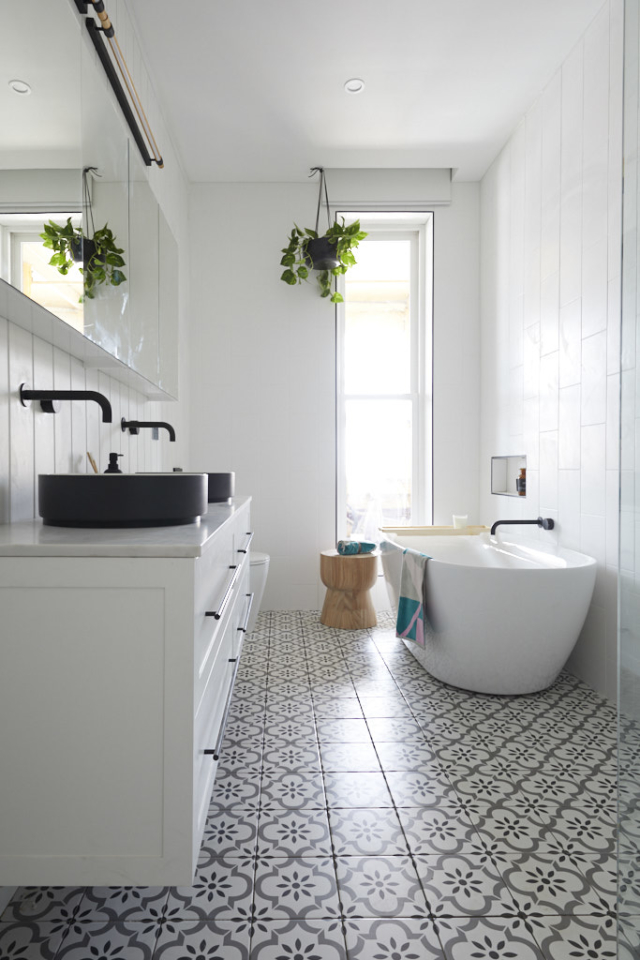 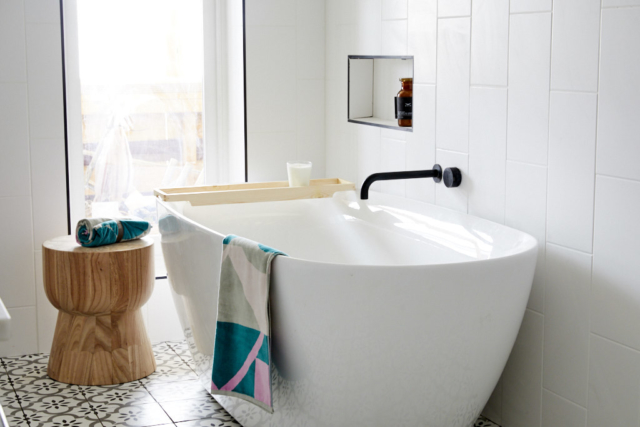 It was this couple’s second week of not finishing and they were clearly disappointed. But the judges had some pretty good feedback regardless. And I thought they did a nice job, even if, like Neale, I feel it’s nothing I haven’t seen many times before.

Darren said he loved it though. “I think it’s really appropriate to the colour scheme next door. I really like the feature tile against something otherwise so fresh and white and clean.”

While Neale loved the height of the ceiling and the timber paneling, his first thought was that it was nothing new. Shaynna agreed and said the styling was undercooked. “They’d be better off spending less on the finishes in these rooms that aren’t important and more on the accessories to amp it up.” She wondered if the overall size of the room and things like the double vanity were a waste of money.

Darren added: “To do this size and spend this much money you’re running the risk of burning through your budget before you’re even halfway.”

There was no grout on the floor and the tiles were unfinished. Darren said they were literally hours away from being done. “Manage your project and get it finished!”

Neale said nonetheless it was a strong base to build on. 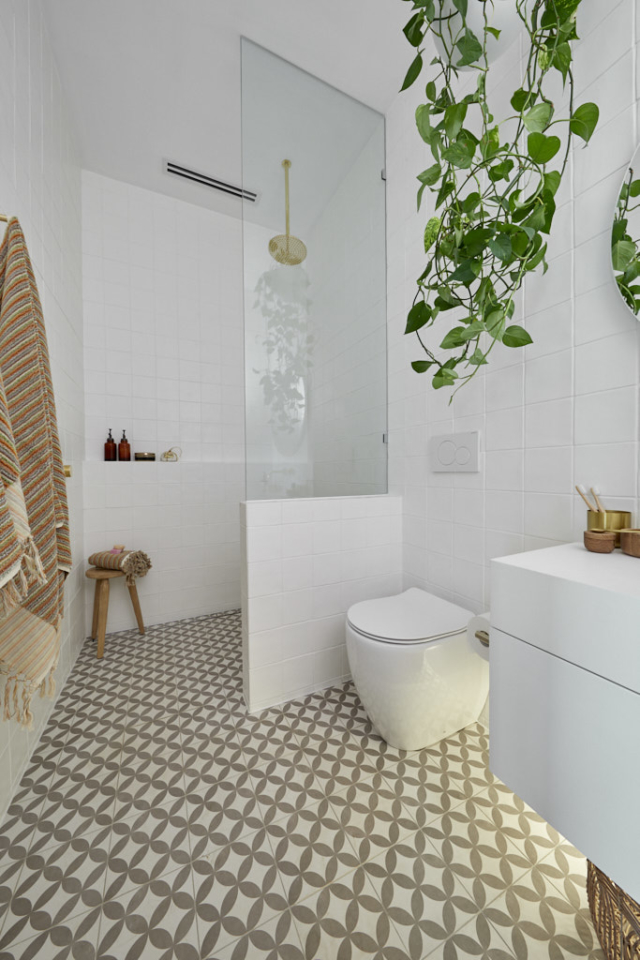 Having tied equal last last week, Andy and Deb were over the moon to take out first place with their en suite, which the judges loved. Neale even said he wanted to pick it up and put it in his own home. High praise indeed!

Darren loved the feeling of the tiles and the simplicity of it.

Neale said it was a happy, feel good bathroom and showed a different reading of luxury. “It’s beautiful.”

Shaynna felt it showed they were making better choices than the others on where to spend and where to save. “They can do budget on a beautiful level which excites me.”

From the last judging to this one, they now have three judges completely confident in them both as a team in the competition. 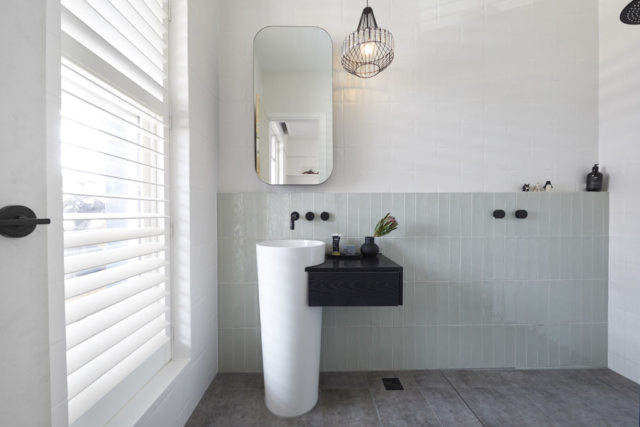 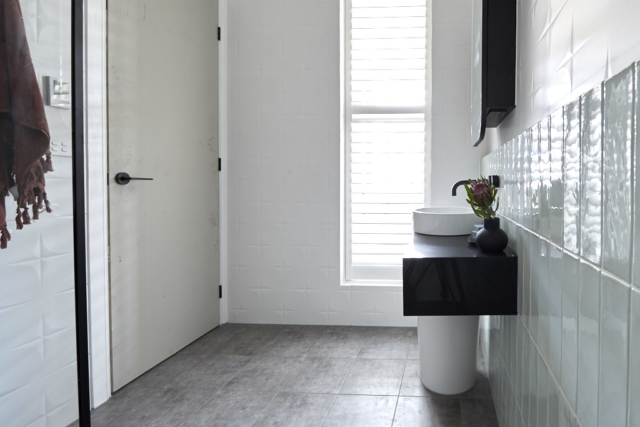 While I loved the quirky vanity and sage green tiles, I hated the light and the floor tiles so this one didn’t quite cut it for me.

Neale, while not a big fan of pendants in bathrooms, thought they’d done well with their choice. Shaynna was not convinced it was practical enough to do your makeup by. She also hated the floor tile, saying it looked like lino. I have to agree!

The longer the judges spent in there, the worse the comments got. “There are some things that are so lovely but they’re being cancelled out by things that bug me,” Shaynna added.

Darren didn’t agree. “This is successful in that they’ve space planned it really well, I love the black tapware and the vanity. 95% of the room I love.” 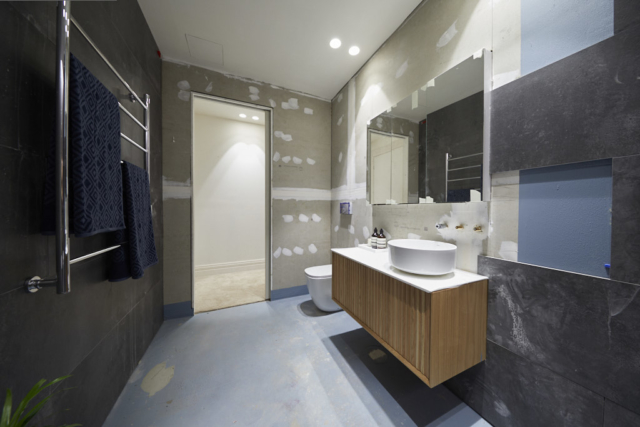 Ever confident, before the judging, Jesse said: “Yes we didn’t finish but we have delivered an amazing room given the time restraints and we’re very proud of that.”

Sadly, the judges didn’t agree. Shaynna said it was really disappointing. Neale couldn’t believe it. He said even if it had been finished, he would feel as if he was standing in a bit of a grey tomb. Ouch! “There is no relief from grey. And how long have we been seeing marble for?”

Darren said it was an amazing vanity and a beautiful basin, but suggested they painted the rest of the walls white to lighten it up.

Neale continued: “I can’t find anything in here to get excited about. I felt so excited when I walked into their bedroom. I felt like I was seeing something new. I feel like this is truly old. It feels old hat. Where is that spark? Is it the same couple who delivered that amazing bedroom?!”

Shaynna agreed she didn’t see the glamour that she’d seen in the other bathrooms. “It’s a yawn.”

So, which was YOUR fave?