So, last week I asked if you thought it was okay to share when I didn’t like stuff in The Block room reveals (because it makes me feel mean and negative!) and you overwhelmingly said yes! But to take the emotion out of it, I’m just listing what I do and don’t like for each room at the end of each recap. Compromise!

So, last night was main bathroom reveals! Read on! 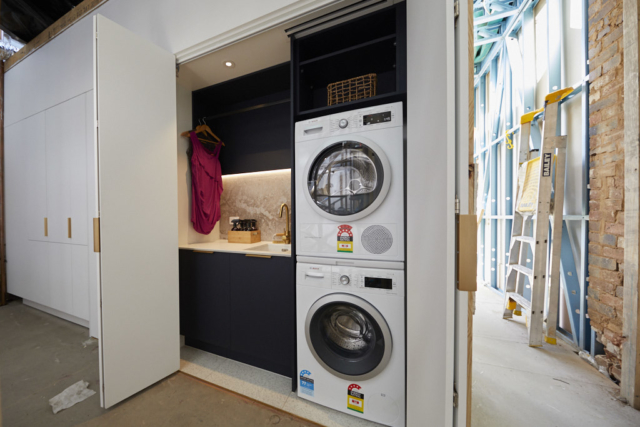 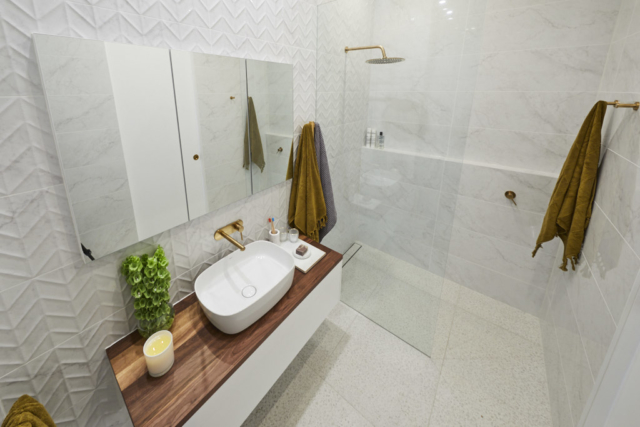 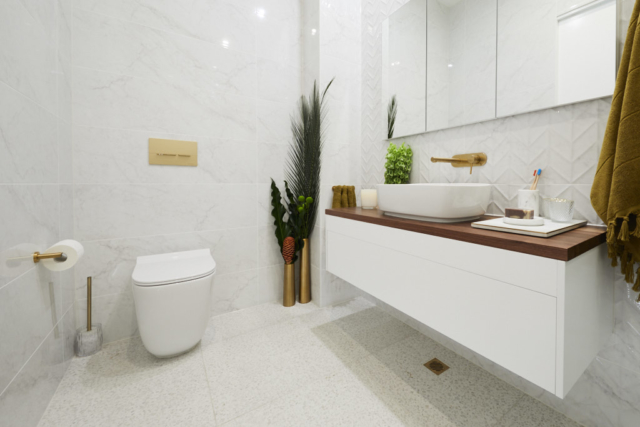 The first thing the judges noticed was of course the laundry they’d decided to create (alongside another en suite rather than a main bathroom). They’re at it again, messing around with the floorplan!

Darren liked the layout and the fact it was on the same level as the bedrooms, which made good sense. Neale said the boys were running their own race. “The laundry is delivered with their characteristic attention to detail. There’s an emphasis on quality. These guys are really interesting because with every week that goes by I’m more convinced they’re designing it for a couple (cashed up empty nesters) rather than a family.” Shaynna was in two minds. She said there could have been a lot more laundry space if they hadn’t put doors on.

Into the ensuite bathroom and they liked the luxe feel and thought it was just the right size. They weren’t sure if it would be enough to go up against the other four main bathrooms and win though. Darren pointed out that changing the floorpan would sometimes work in their favour and sometimes not.

I liked: the laundry doors and handles, cabinetry and finer details inside, the gold tapware and the shelf across the length of the shower.

I didn’t like: The chevron tiles, the lack of rail shower. 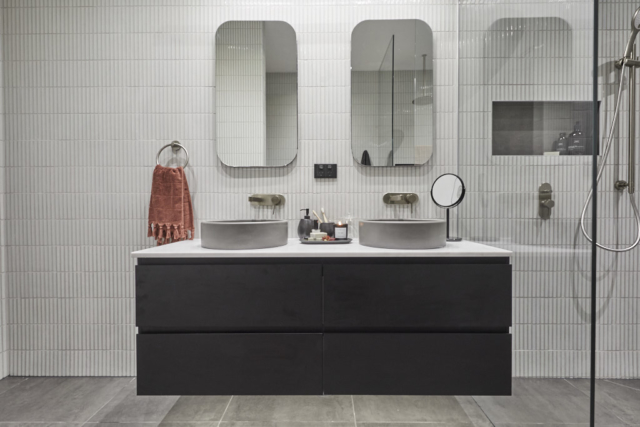 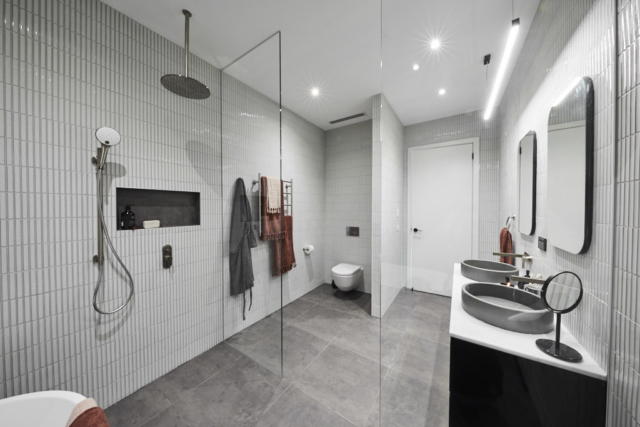 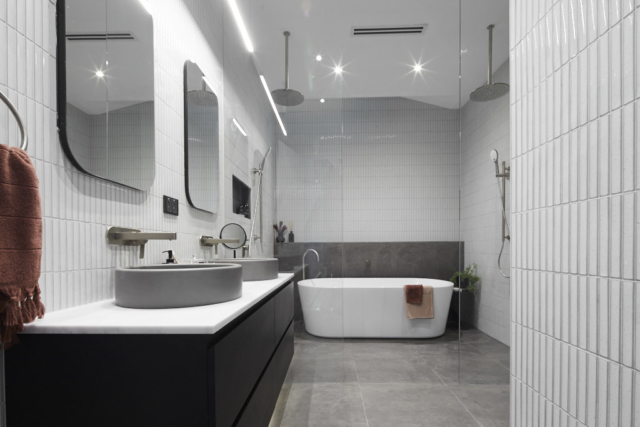 The judges loved the tiles. Neale said they were stunning. Shaynna said “I love this and I’m excited. They’ve done the floorplan justice.” She was even more excited by the huge amount of storage. Darren said: “Maybe what they’ve given us is the perfect main bathroom.” He then got in the bath to look up at the raked ceiling and skylight above. Neale liked the brushed steel tapware that felt modern and different. They said the lighting layout was excellent. Shaynna and Neale thought the styling, which has been questionable in the past, was spot on. “This is next level,” said Shaynna. Darren loved the luxury of space and the separate, private, concealed toilet, and storage for days. He called it one of the best bathrooms he’d seen on the Block. Not putting the powerpoint inside the mirror cabinet was about the only thing that let them down.

I liked: The tiles, the double shaving cabinets with rounded corners, the overall modern and sophisticated aesthetic and the way the colour palette was moody without being dark, the spacious feel and great layout, and of course, the skylight over the tub.

I didn’t like: The chrome (but it was really hard to pick something!) 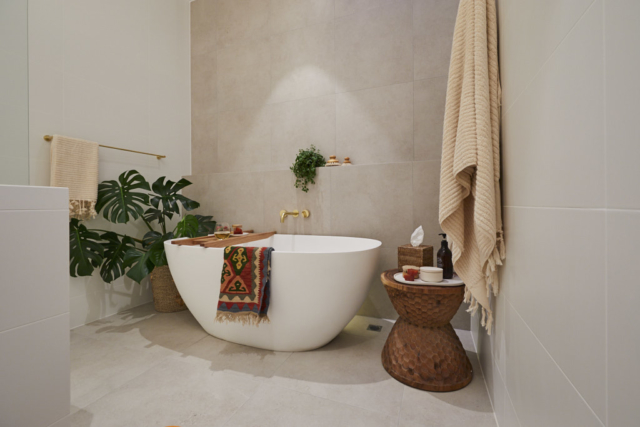 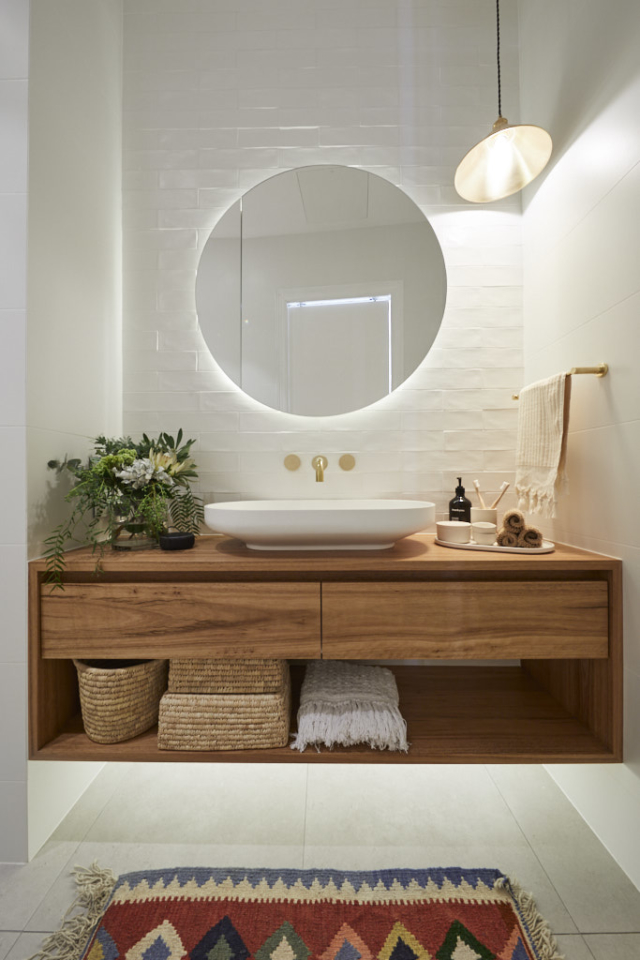 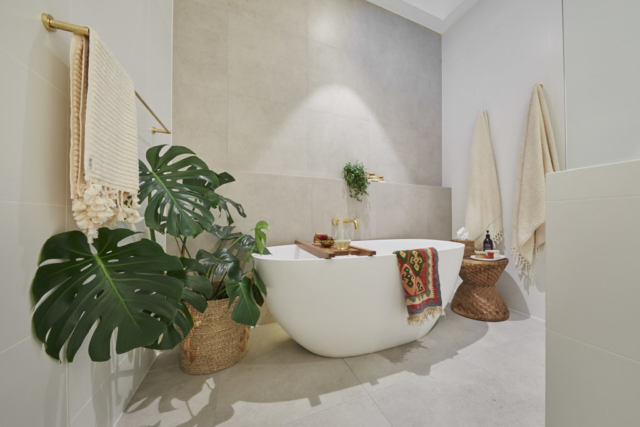 The judges loved how consistent and “beautiful” it was. Darren loved the custom made timber vanity. Neale thought it was timeless. And then they saw how Alexa could be told to switch on the bath tap (amazing!). The lighting however was all wrong, practically speaking. Neale liked the styling, but he thought the toilet should have been left within the main bathroom. Tess and luke’s floorpan was superior. Shaynna didn’t like the nib wall (which didn’t serve a purpose), which made it feel smaller again. They also noted it only had one rain shower. “It isn’t really feeling like a main bathroom, it’s feeling like an en suite,” said Neale. Neale said it felt like the two sides of the bathroom had been done by different people and he was a bit disappointed.

I liked: The tiles, the gold tapware and the timber vanity, the round mirror and the smart Alexa-controlled features.

I disliked: The cluttered styling, and the way the room was cut up with no real benefit. 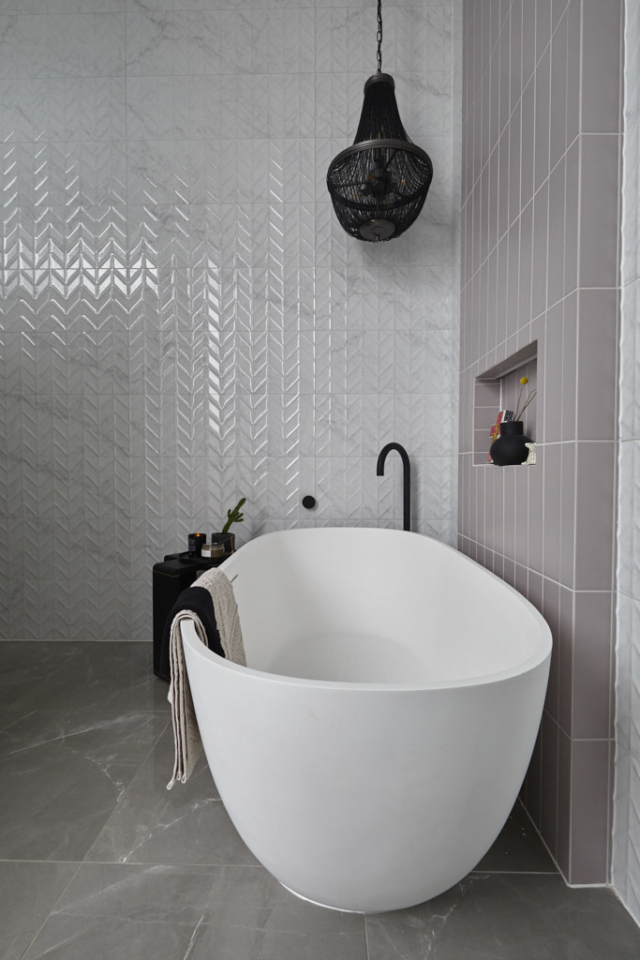 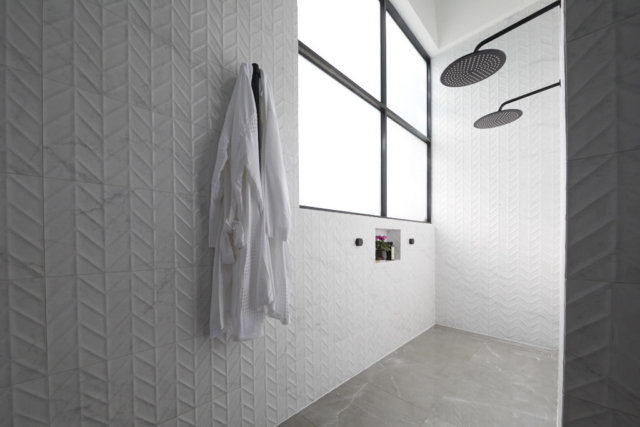 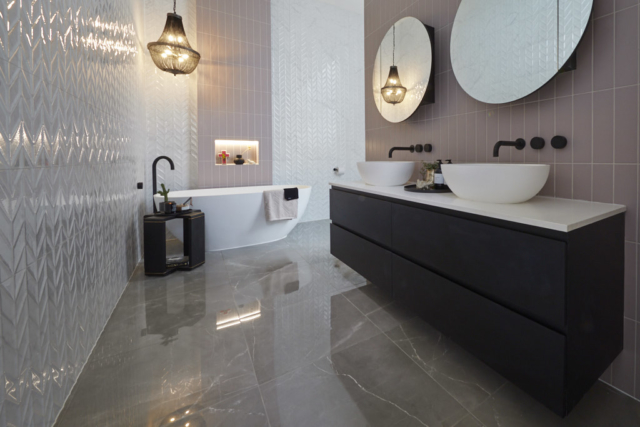 Instead of a master bathroom, these two decided to create a second en suite, for what they’d call a second master bedroom.

The judges loved the tile choices (the chevron one had already been seen in Mitch and Mark’s) and the styling. The lighting though was all wrong. Shaynna loved the double shower with the huge windows and the skylights above. She loved the flexibility they’d created by tweaking the floorplan. She could see that the master suite upstairs could become a space for the grandparents or the au pair, for example. The judges said Mitch and Mark should watch out because they were playing them at their floorplan-changing game and perhaps even doing it better!

I liked: The lilac tile, the round shaving cabinets with storage, the bath.

I disliked: The chevron tile and the super glossy floor tile, the chandalier.

Picks to buy: Fazeek terrazzo soap| Set of two round trays by Zakkia 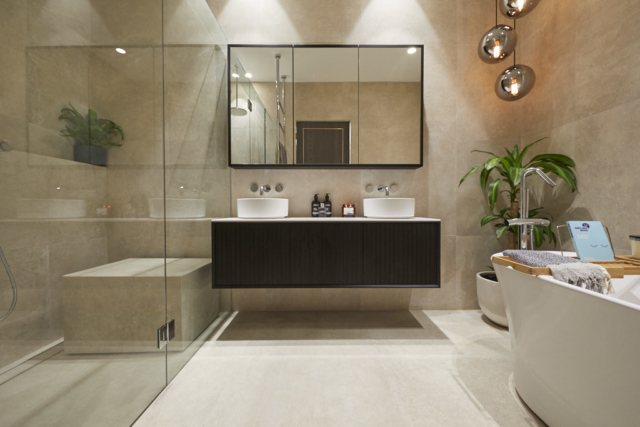 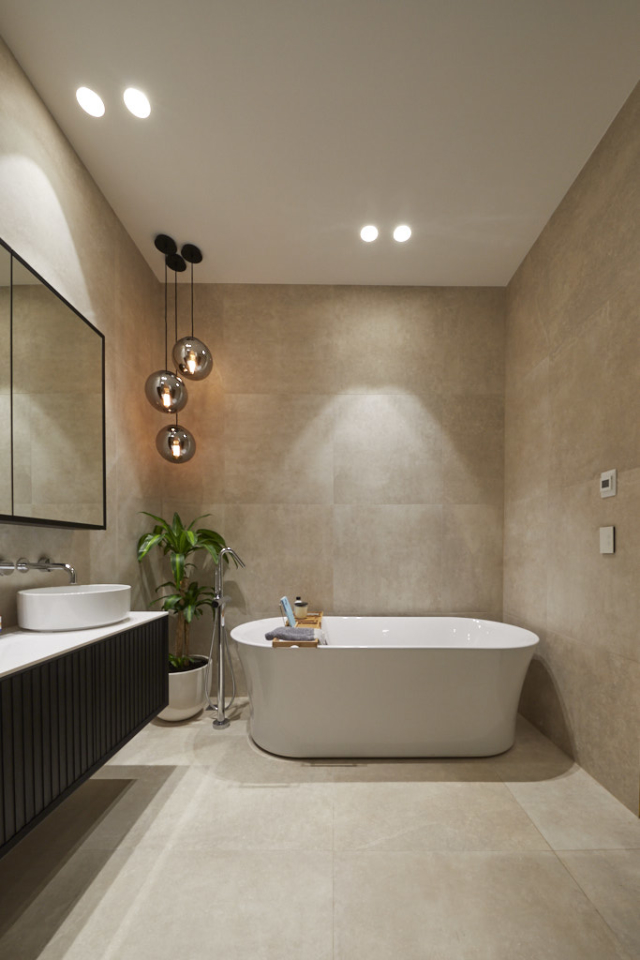 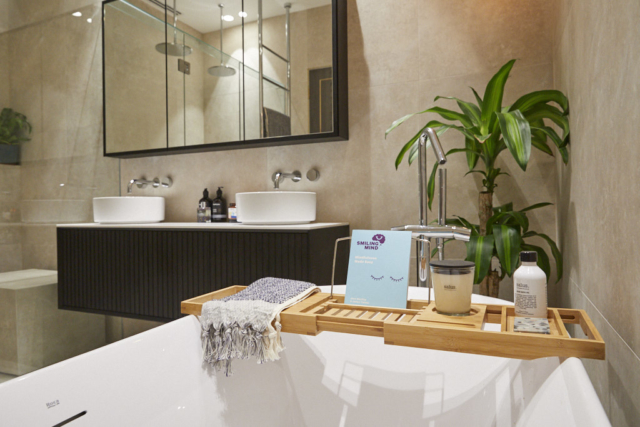 On first impressions, Shaynna said there was a lot to love. Her and Neale loved the cabinetry. Shaynna said it felt light and bright compared to the “tomb” they delivered with their last bathroom. The execution throughout got a big tick. Darren said it was beautiful, and the lighting was great. Neale didn’t like the chrome and thought it cheapened it. He was perplexed by the box seat in the shower. Neale said it was ugly and Darren thought it was redundant. Shaynna felt the styling didn’t feel expensive enough. Neale said he was continually disappointed by their styling because in week one it was so good but he had never seen it repeated. He didn’t like the toilet being separate either. “A main bathroom should have a loo in it.”

Their comments didn’t go down too well with Mel, who declared they had no idea about selling houses!

I liked: The vanity and mirror cabinet.

I disliked: The box seat, the chrome, the big glass doors, the styling and the pendant lights.