Sitting on a diminutive 195 square metre block in the Melbourne suburb of Brunswick, this weatherboard workers’ cottage was renovated recently, with Gardiner Architects at the helm. The front section of the house encompassed two bedrooms, a hall and a lounge, while the rear was home to your typical weary lean-to.

“It was small, dark and pokey with low ceilings and no insulation. Along with being hot in summer and freezing in winter, the house, as it was, had no connection to the outside,” says architect Paul Gardiner who set about amending all of those things.

Restoration works were completed on the front heritage section, of the home, while a modern, open-plan extension was added at the back. The home was also opened up to the outdoors at the rear, and with the addition of a courtyard.

“Our approach is to find ways to allow for internal spaces to have adequate light, protection from hot afternoon sun and a visual connection to green spaces and the sky,” says Paul. So, while the home is nestled in a dense, urban area, it feels private and protected with the garden key to this feel.

Of the decision to restore the front of the home, Paul sees value in celebrating and preserving heritage buildings regardless of whether regulations require it or not. The practice, rather conveniently, also happens to be sustainable too.

“Keeping construction materials already in use has to be one of the most effective and sustainable things to do. Unfortunately, in Australia we don’t have adequate systems that see demolished materials sorted and sufficiently reused and recycled. So, we say, don’t knock it all down,” says Paul who retained as much as he could from the existing home.

And while the architect is keen to restore heritage features, he sees no value in creating a new home that is trying to look like an old one. “Rather than extending the same roofline or using the same materials for the new area of the house, we like to find a way to relate to the old without replicating a period aesthetic,” says Paul.

Sustainable practices underpin the home’s entire design; an aspect that was client driven. And while the owner didn’t fully understand what sustainable building practices were, she was keen for them to be incorporated in the home. Firstly, keeping the house on the small side was a sustainable choice, and the home was designed with passive solar design principles including a northern orientation that allowed for protection from the hot afternoon sun.

“We also chose to incorporate a concrete slab for thermal mass that helps maintain a temperate climate inside. Solar panels and water tanks assist to reduce the usage of mains electricity and water, which in turn reduces the home’s running costs,” says Paul.

The home’s aesthetic choices were driven by the owner’s existing collection of old furniture and art; a mix of family heirlooms and pieces collected while travelling. “The pieces have a very warm and rich aesthetic,” says Paul. Timber flooring and joinery, as well as white paint, was used to complement to the collection.

“We weren’t seeking a minimalist approach, just a backdrop for all her beautiful belongings to sit within. The spaces have a comfortable feel while being open and full of natural light.” 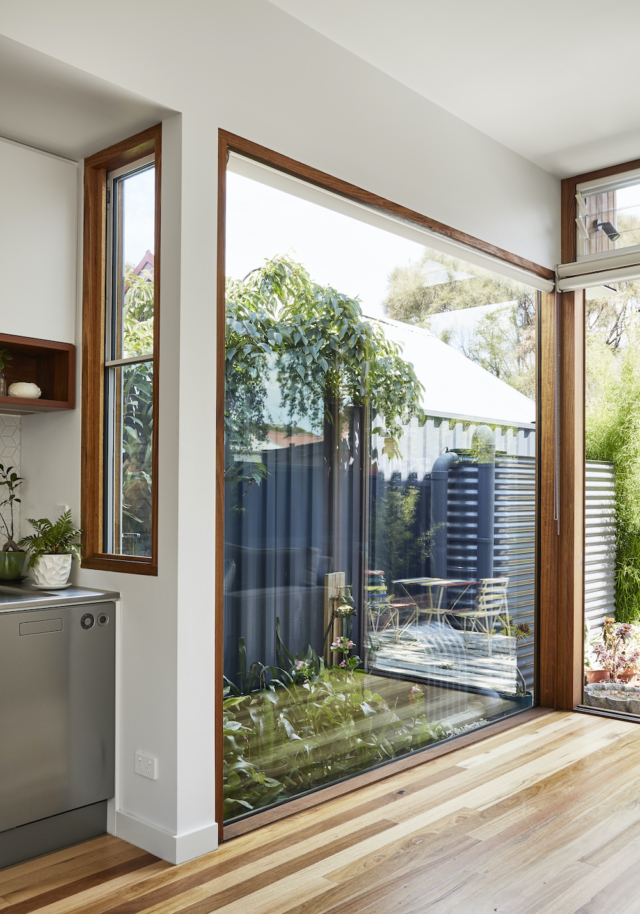