Do you love the area you live in, but you’ve outgrown the house? It’s a classic conundrum and it’s one that a young Sydney family had recently when deciding whether to move to a new house or stay put and renovate. But after doing the sums, and weighing up the various pros and cons, the couple went with the latter, a decision they believe was ultimately cheaper than moving.

“I’d say the main savings were all the usual costs involved in selling a home and purchasing another, such as stamp duty, agent’s fees and mortgage exit fees. We estimate the saving was north of $70,000,” says Luke Carter of Sandbox Studio, the architect responsible for the renovation of the home that is located in Marrickville, in Sydney’s inner-west.

With a young growing family, the couple wanted two extra bedrooms as well as improved connections between the house and rear courtyard. “The interior was dark and a series of ad-hoc additions over time had resulted in an awkward layout with the laundry marooned at the back of the house, and no clear connection between the living space and small rear garden,” says Luke.

The home’s original footprint already covered the block which meant the only way was ‘up’ in terms of an extension. “We managed to retain the existing kitchen, dining area, master bedroom, and front bedroom, while turning a two-and-a-half-bedroom home into a four-bedroom refreshed home,” says Luke.

And when it came to specific budget-conscious design decisions, Luke tried to retain as much as possible of the existing building fabric. “We basically built less!” says Luke. Existing floorboards were sanded and refinished, existing brick walls were exposed, and the internal exposed brickwork was painted.

Another contributing factor to the cost-saving was the fact that the owners project managed the build themselves rather than outsourcing to a project manager; a decision that potentially saved 25 percent on construction costs.

But as previously mentioned, the cost saving wasn’t the only decider in staying put. Aside from loving the home’s location, the couple also love its easy walking distance to transport, parks, schools, shops and cafes; all serious lifestyle factors to consider when weighing things up.

“Also, being a renovation, the owners could customize the home exactly to suit their lifestyle, as opposed to buying something that’s new or renovated by someone else.” 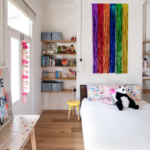 Renovation ideas: Chic Sydney terrace now light filled
Located in the inner-city Sydney suburb of Redfern, this terrace home was transformed recently under the talented eye of Rebecca Elms, of the fashion and homewares store Elms. The Surry…
FacebookPinEmailTweet