From the Street, Jenny McCown’s home is a hidden gem amongst the palms that surround the front veranda. It isn’t until you step through the lattice threshold and see her bright pink front door that you become aware of the beauty and flair that lies within this unique abode. 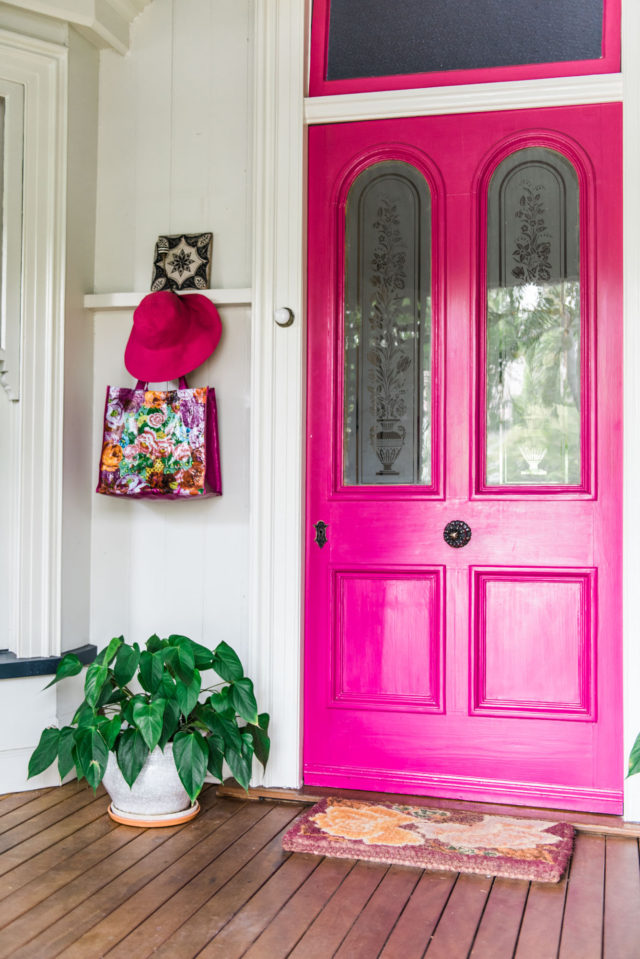 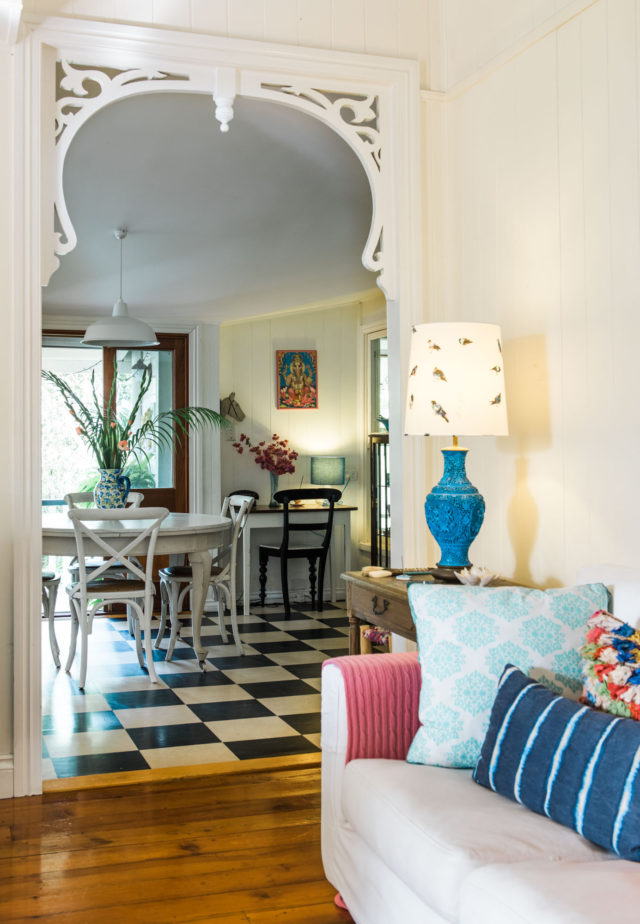 It has been decorated with well-travelled collections, cool vintage and country glam aesthetics, where the colours pink and blue seamlessly tie the whole home together. 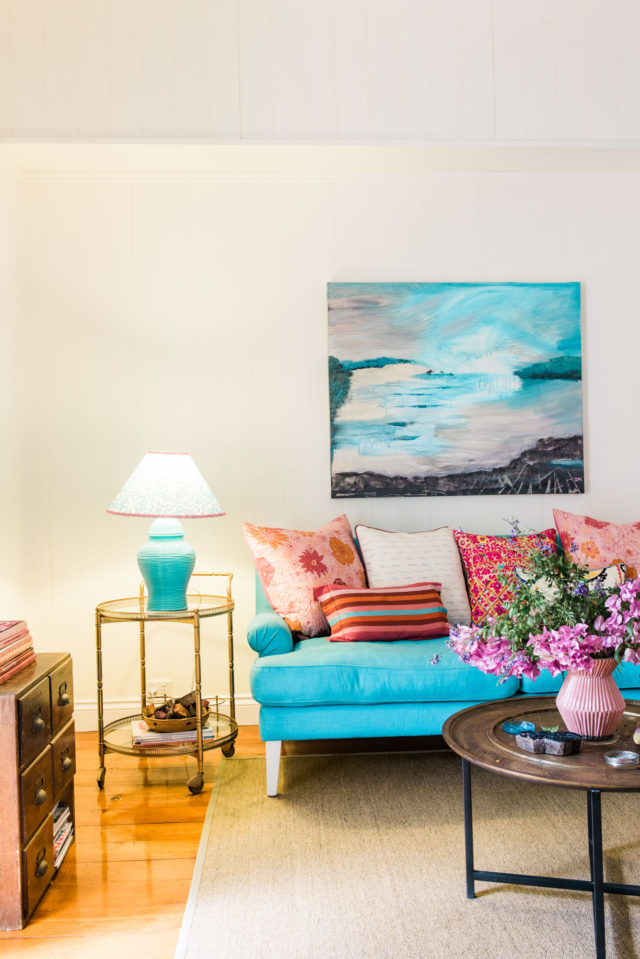 Jenny is an artist, a recent empty nester who shares her four-bedroom East Brisbane Queenslander with a family who frequently come and go. East Brisbane is an older suburb with many original Queenslander homes; it has a strong community spirit which is made up of both long term residents and new.

Perched on the slope of a hill, Jenny’s home was originally built in 1905 by a grazier for his three daughters to live in. Jenny bought the home in late 2009 because it was simply the only house she could imagine herself really living in. 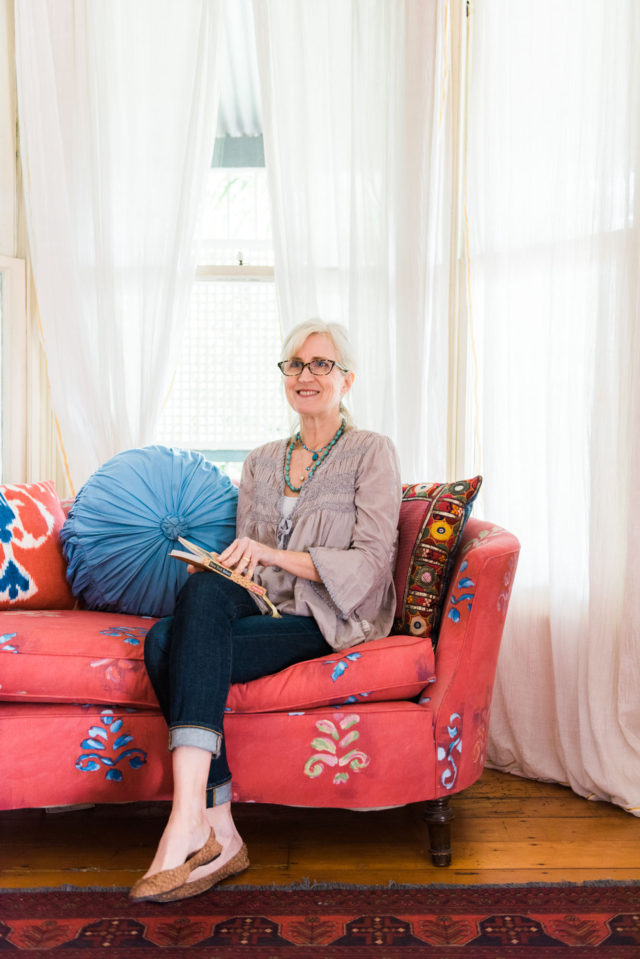 Jenny’s paintings often capture the magic of her colourful home, where flowers bloom inside beautiful vintage jugs placed on bright coloured tablecloths or well-loved stools. A collection of bright coloured artworks, including her own pieces, adorn the home’s walls.

Jenny and her family were keen to keep the original character and style of the home therefore preservation has been an important focus. Jenny also prefers to reuse and recycle where possible, opting to update the home by painting the interior entirely white with Dulux Fair Bianca, including the original silky oak kitchen. 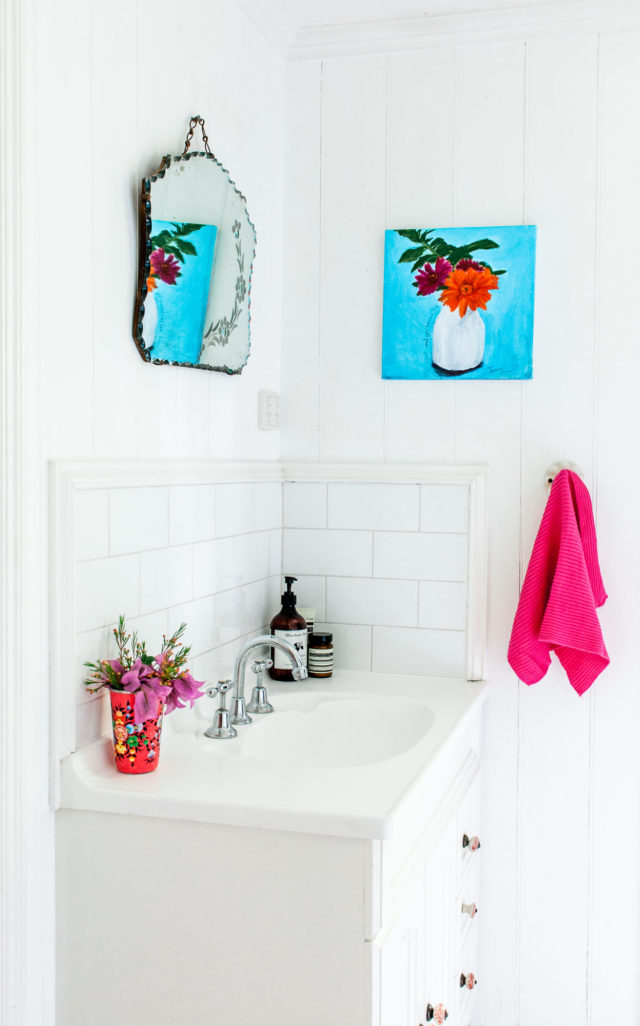 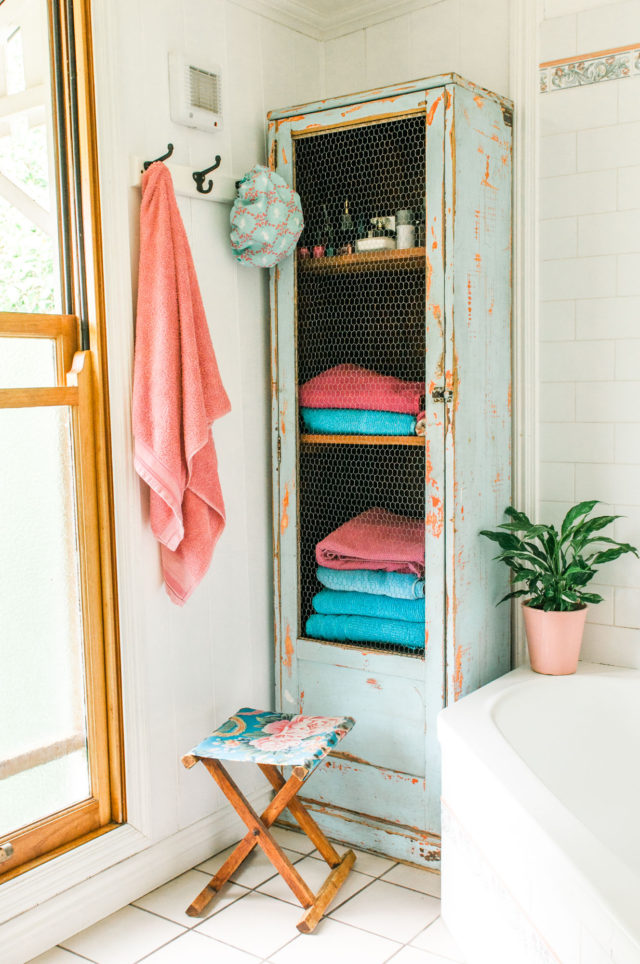 They also upgraded the hardware in the kitchen and bathrooms. The open plan kitchen/dining area was transformed by adding a black and white linoleum floor. 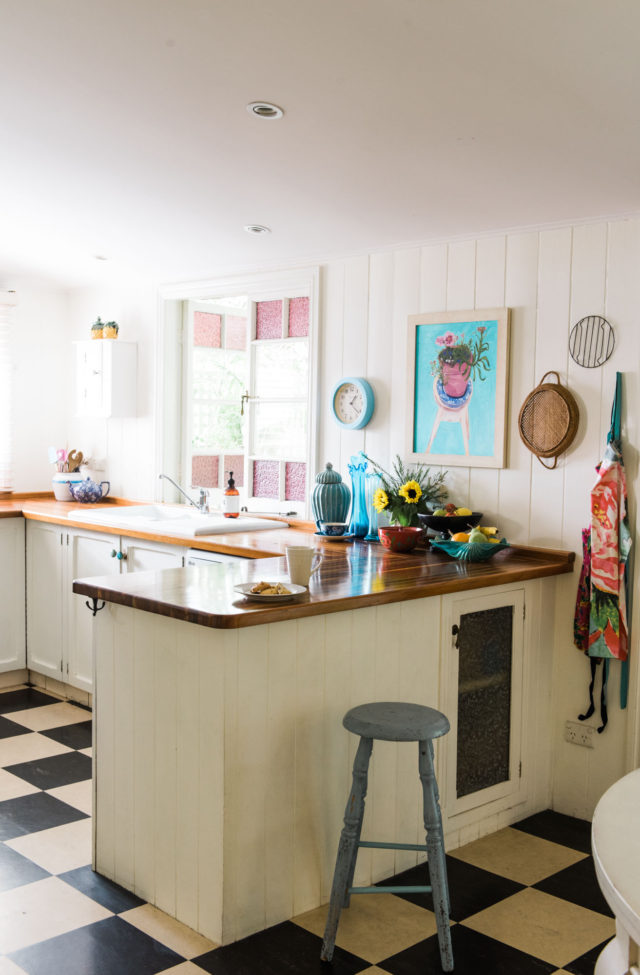 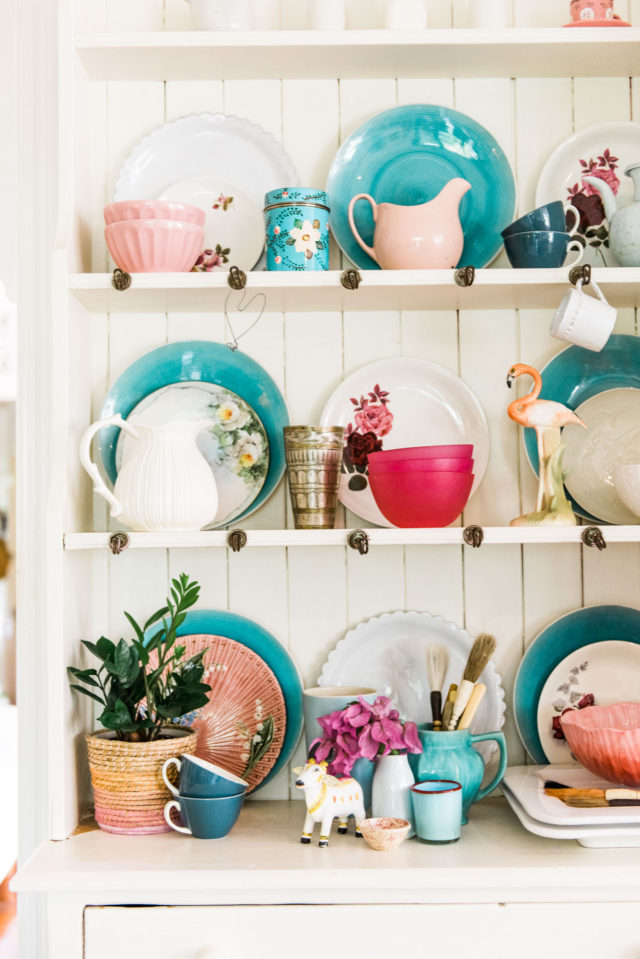 Jenny’s decorating style is instinctual; she deliberately chooses to decorate with pieces that speak to her sentimental or emotional sides. She styles her home with happiness in mind, literally by layering her home with a varied range of treasured possessions that make her smile. 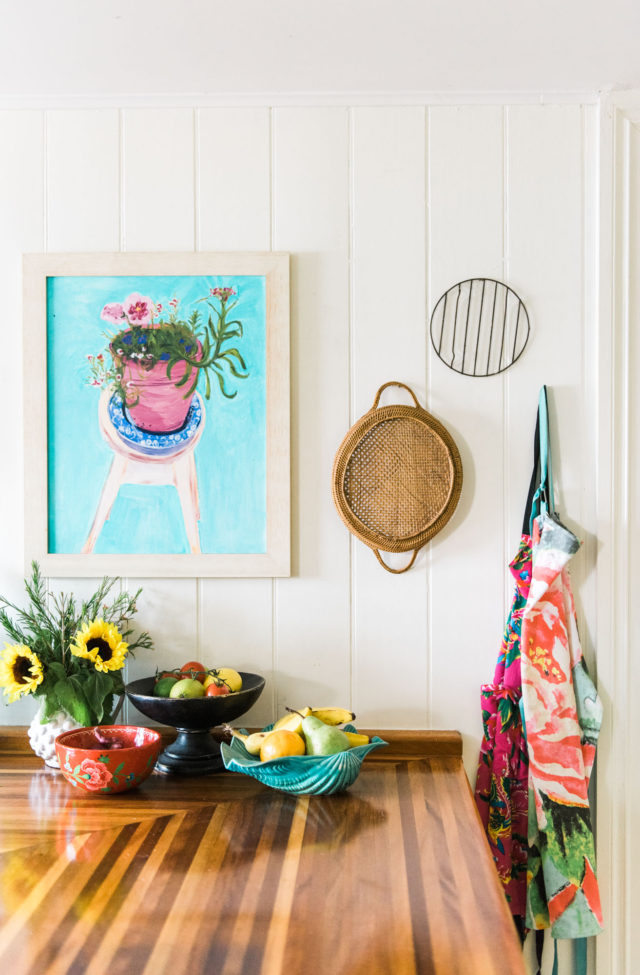 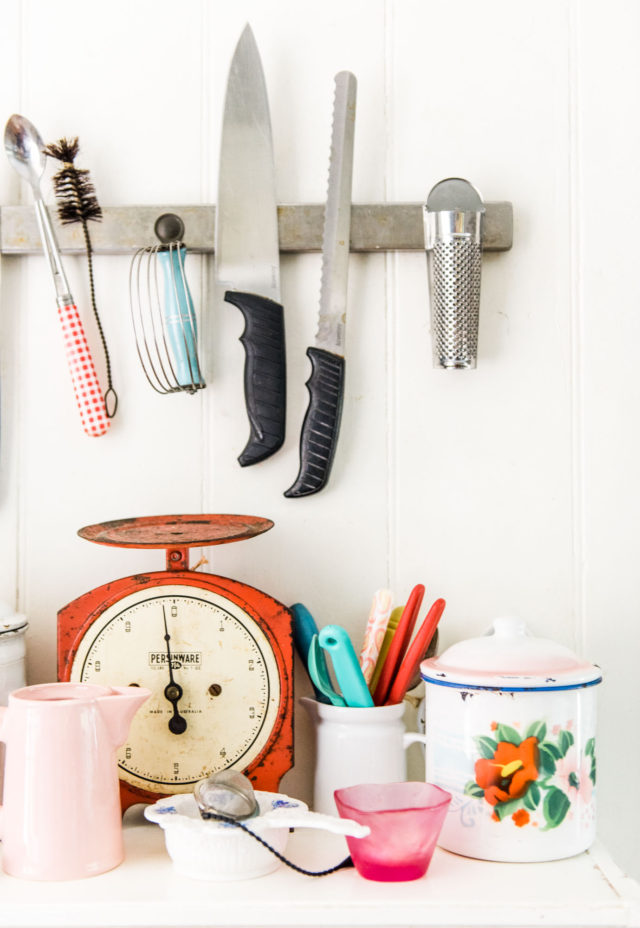 In the main bedroom is a gallery of sentimental artworks and trinkets; three artworks are particularly special to her because they were creations of her boys when they were little. 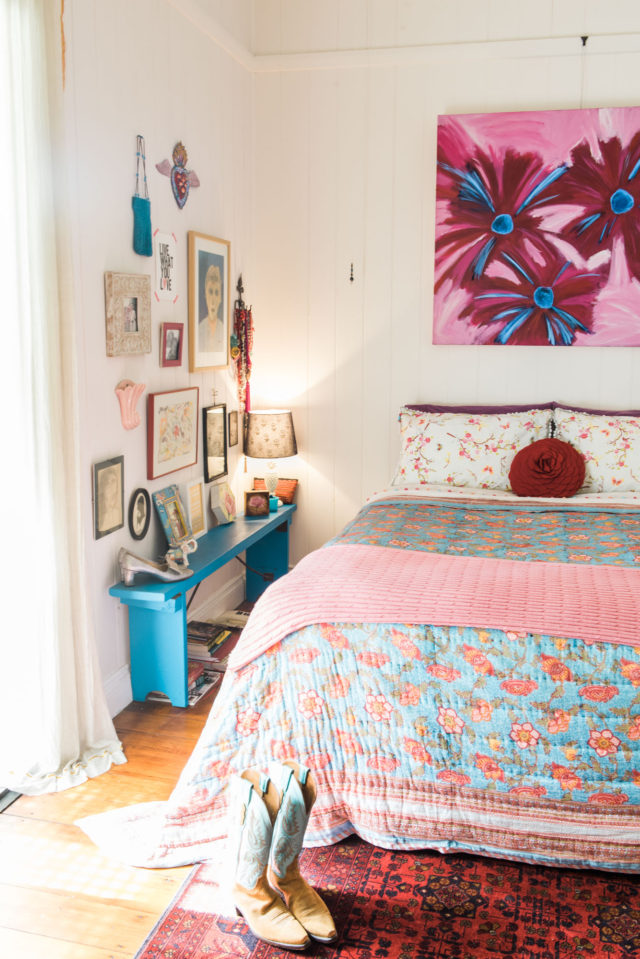 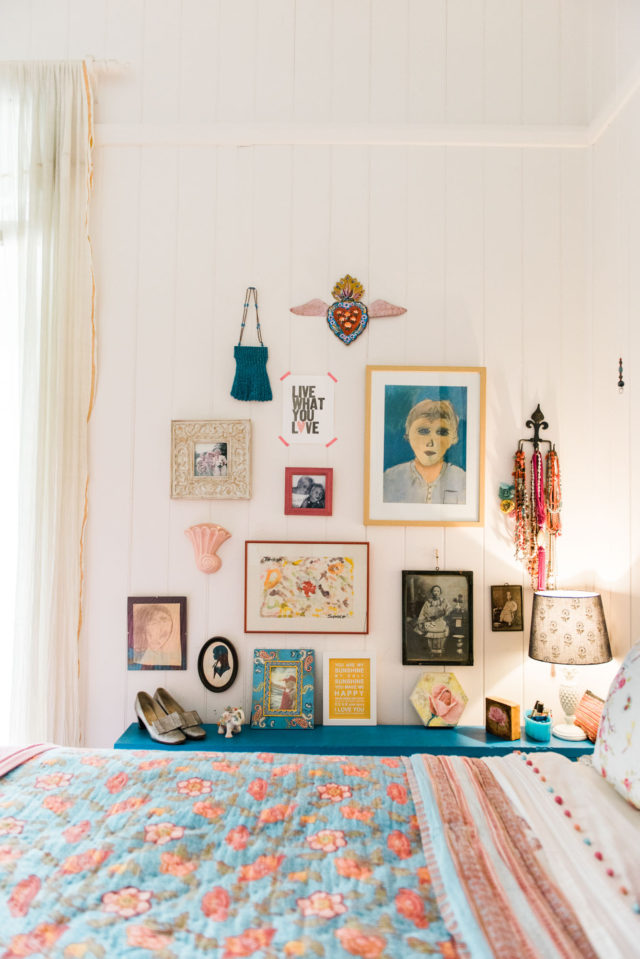 Jenny’s passion is colour and is particularly fond of bright shades of pink; the front door (before you ask!) is painted in Dulux Lickedy Lick. 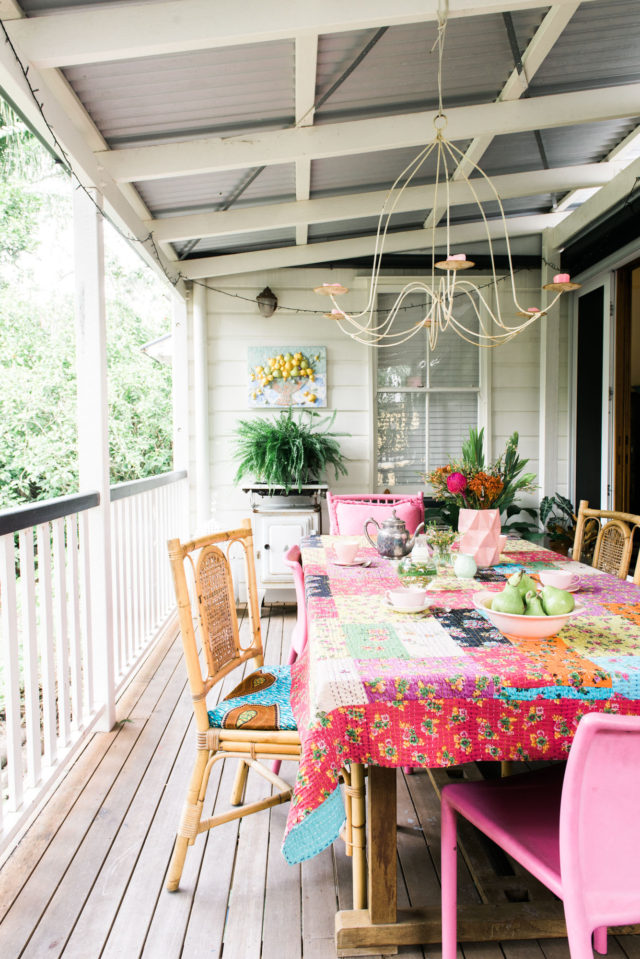