In partnership with Latitude Financial Services

I feel like I’ve been planning my new kitchen for months. Oh yeah, I have been! It’s been five months since we moved into our new (old) home, affectionately called the “nanna house” due to the old lady who lived here for three decades before us. We have been slowly but surely bringing her into the 21st Century but the first major job on the list was the kitchen and now the wheels are finally in motion. We are looking at an imminent demo, so any tips for surviving without a kitchen for a few weeks, will be gratefully received in the comments (thanks in advance!). 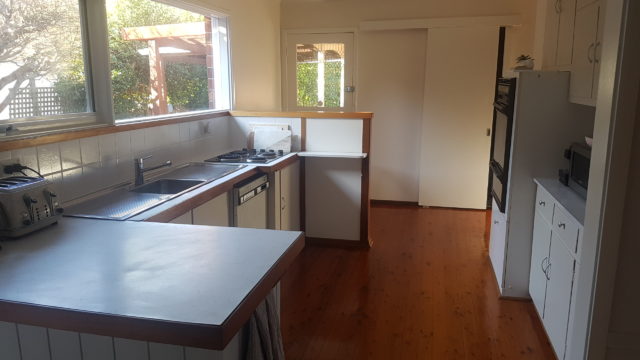 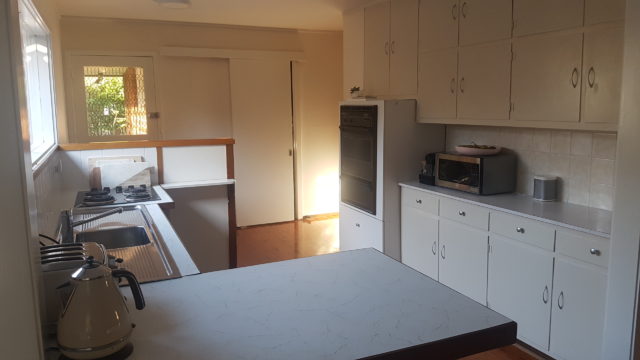 So here’s what we’re dealing with now. A very original kitchen which had a little spruce-up prior to the house going on the market. We’re talking old school solid timber cabinets installed long before soft close doors and smooth drawer runners were invented. They’re not even tall enough for most of today’s mod cons, like the Vitamix and the bigger wine glasses, for example. I haven’t unpacked more than the essentials because despite much scrubbing, you can only get that orange floral lining paper (which has become one with the cupboards) so clean. The laminate benchtop is actually in amazingly good condition and the brown oven and electric coil cooktop still work surprisingly well. But the museum piece dishwasher keeps tripping the electric and leaks every time we use it. But at least we have a working dishwasher!

Then there’s that random half-wall three quarters of the way down on the lefthand side. On the other side of that is, well, dead space! And the beautiful sliding door to the laundry.

The design was always going to be relatively straightforward: maximise use of space by removing the half-wall and bricking up the back door (we have two others!) and move the breakfast bar back into the kitchen as it is currently encroaching on our already-narrow dining room. Making space for a modern fridge-freezer (ours currently lives in the dining room because there’s nowhere for it!) was also pretty important! 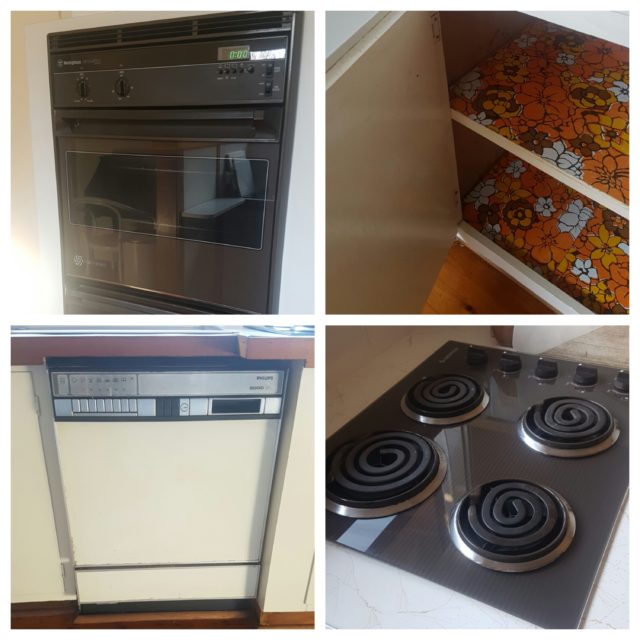 While I had a pretty good idea what I wanted to do, when you have talented friends, you’d be mad not ask their advice, and I have several! So when interior designer James Treble (from Channel 10’s The Living Room) was at our place for brunch one day, I made him earn his food by drawing me up a quick plan! And it suddenly all clicked into place.

We than had a designer from Freedom Kitchens come out to tell us what was actually possible, using the drawings as a rough guide. This was really helpful as there were plenty of things I hadn’t considered. She explained everything really well and I felt much more confident in what we were doing after that. Some plans were produced, which I was happy with, and we are now waiting for a site check and measure this Friday before we can go any further. I am dying to lock in my trades and get going! Our friends at Integriti Bathrooms (they did our beautiful bathroom reno at the old place) are coordinating the trades with me (thanks guys, I wouldn’t trust anyone else!) and this has been a huge learning curve for me too, but it was about time I learned a bit more about the process!

So, what will be be doing in here? I’m going for classic with a touch of glam!

Shaker-style cabinetry was always going to be my choice. Due to a very tight budget (we maxed out on our mortgage!), we decided to go with Freedom Kitchens’ new and very affordable flatpack option, The Essential Kitchens Range. My handyman will assemble the cabinets, even though it’s apparently a piece of cake. That stuff just isn’t mine and Damian’s forte!

As this is a longterm home, it had to be a stone benchtop. I’ve chosen Caesarstone’s Noble Grey as a nice contrast to the white cupboards while still being quite light (I had dark benchtops in my last place and hated them). I’ll be taking that up the splashbacks too. Our kitchen is flooded with natural light, the best light in the house, so I wanted to keep it all light and bright in here. 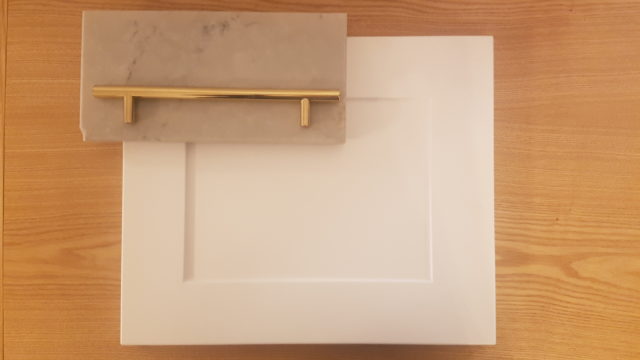 Against many people’s opinions on what will date or what is on trend, I am sticking by my decision to go with brass handles from Kethy, a gold Zip tap and even (wait for it) a gold undermount sink. Controversial! 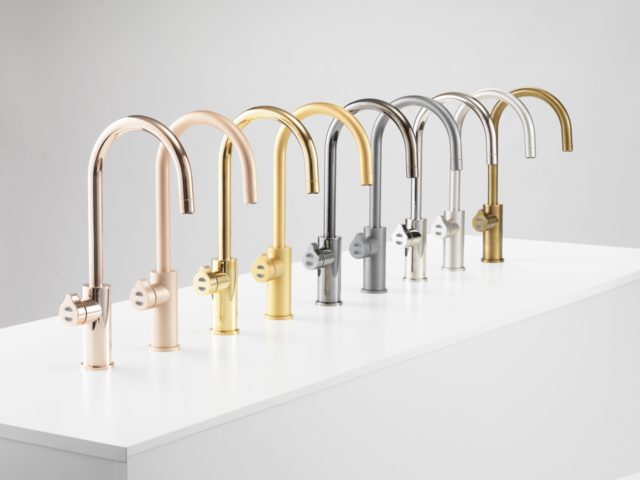 Personally, I think brass is a classic look. Rose gold, I’d agree, may be having an extended temporary moment, but when you think about it, brass has been around in interiors for a really long time! I don’t have resale in mind as we intend to live here for at least a decade so I’m taking the opportunity to specify what I really want. This is one flatpack kitchen that is being seriously pimped!

To add a little colour, pattern and texture, I’m considering a Roman blind made from some kind of navy-based textile (you knew there’d be navy, right?) and some navy rattan stools like these from Naturally Cane. 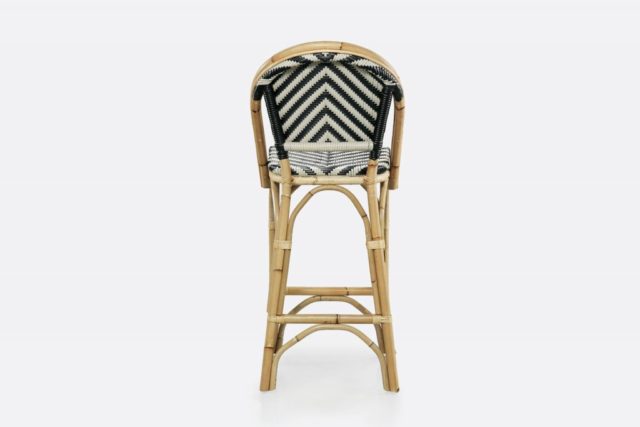 Or I might add the colour and pattern with wallpaper (away from any water or potential oily splashes, don’t worry!) and have plantation shutters instead. Lots to think about!

Appliances were a learning curve! I’ve chosen mine from Ilve and after dreaming of a freestanding cooker for a really long time, at the last minute, I decided a more streamlined built-in look would be better for our kitchen. What I knew I needed though was quality that would last and something big enough to cope with entertaining and a growing (no, that’s not an announcement!) family. I’ve gone for a 90cm oven, a 90cm induction cooktop, a concealed rangehood and an integrated dishwasher. I won’t pretend this European brand’s style credentials didn’t sway me too! 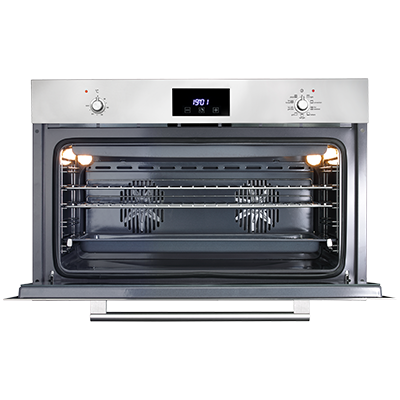 Flooring is still up in the air after a supplier let me down at the last minute (yes, this happens to media too!), but we are looking to replace the floor everywhere bar the bedrooms (which are newly carpeted) as soon as the kitchen’s finished.

I look forward to sharing this journey with you over the coming weeks!

–Looking to renovate your kitchen? Get some tips on how to finance it from our partners at Latitude Financial Services.

Eco friendly toilet paper -- but make it cute! I

My ensuite glow up with @tesa_au 💫 Check out t

Just a little sneak peek of an amazing house makeo