Bursting with character, Darlinghurst’s The Strand Hotel has completed the final phase of its multi-level restoration. The 99-year-old pub with the new rooftop bar and 17-bedroom hotel is now open. Creating a boutique refuge in the heart of Sydney’s CBD, The Strand offers sophistication with a mix of well curated French style.

A contemporary blend of Parisian elegance and bohemian spirit, The Strand Rooftop is an idyllic open escape for both hotel guests and locals alike to soak up the afternoon sun underneath the kaleidoscope awning or watch the city at dusk, lit up with the glow of festoon lights. The rooftop offers a playful and vibrant mix of colourful textures, warm timber and lush verdant landscaping that encloses the intimate space.

“We’ve designed the rooftop to provide an unexpected and charming escape amongst the anonymity of William Street, with a deliberate strong contrast to the aesthetic experienced through the brooding texture and materials of the hotel rooms and bistro below” says Tom.

The bar serves its signature drinks, the French Ginger Mule and Thyme & Basil Daiquiri, alongside a menu of light dishes such as tuna tartare and fried shallot with sesame crackers, corn and gruyere croquettes, fried chicken with pickles and hot sauce and the Rooftop toastie with leg ham, mustard and pickles.

The rooftop will also host a series of live entertainment and weekly DJs each Friday and Saturday from 6pm to midnight and 4pm to 10pm on Sundays.

Describing The Strand Hotel as a drink, George wants the hotel to feel like a dirty martini; classic, with a twist. “The Strand has been designed with the intimacy and personal service of a boutique hotel, creating a community hub of likeminded people, that makes you want to return again and again. My purpose is for the character of the hotel to grow and continue to build over time, just as if you were building your own home.”

The Strand’s 17 boutique hotel rooms with refined, contemporary interiors feature crisp white linens, rattan bedheads, deep green finishings and contrasting dark floorboards. With five different guest rooms to choose from, starting at $199 a night for a king single through to $359 for a deluxe queen, each calm oasis is filled with considered essentials that will keep guests both pampered and plugged-in.

As guests enter from the bustling William Street, they will be welcomed through to a charismatic hotel house of Parisan sensibility where grit meets glamour and dark black surfaces paint a masculine edge to contrast the refined furnishings and warm cream textures of the walls, showcasing the history and character of the building.

The architectural design has been born off the history of the site with a winding staircase taking guests up to a two-story labyrinth of winding halls, where George has hand selected Australian photographers such as Simon Lekius, Denniela Rache, Chris Searl and Domonic Rawl to adorn the walls.

Meanwhile on the ground floor, The Strand Bistro is bolstered by a playful sense of mischief, drawing cues from turn-of-the-century Paris, with a modern laidback interpretation of French cuisine. Spoons of beluga caviar sit proudly alongside humble steak frites and duck leg pie served with grilled broccolini, mash and gravy and baguettes with cultured butter. Culinary director Nick Mahlook has designed the Bistro menu to hero seasonal Australian produce while the extensive drinks list boasts an impressive line-up of French and Australian wines, aperitifs, cocktails and beers and a 49 strong whisky list.

The Strand Bistro, Hotel and Rooftop are now all open for bookings. 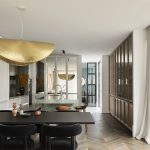 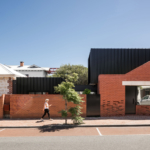