With an entirely new format (five houses in one Melbourne cul-de-sac) and a line-up of contestants that includes former Blockheads and newbies (Fans vs Faves), the latest season of The Block looks set to provide entertainment plus. And we’ve no doubt that much of that will come courtesy of Block veterans Mitch Edwards and Mark McKie who are back for a second round on the show.

“It’s such a privilege to be on The Block once but to be invited back for a second time is amazing. We didn’t hesitate when we were asked,” says Mitch who has been working alongside his partner Mark in their interior design business since the couple’s first appearance on The Block in 2019. The couple also have a home fragrance line and are in the midst of renovating their own home on Sydney’s Northern Beaches.

As for the couple’s house on The Block it had a federation façade, but not much else, when they took it on. “We wanted to take the home in a direction that paid homage to the history of the home but in a modern, practical way. It’s a version of a coastal look with a hint of federation and a country feel,” says Mitch. The home’s colour palette takes inspiration from the original leadlight windows. Viewers can expect to see plenty of soft pink, sage green, and dusty grey throughout.

“We will be exploring a new look. We think, from an interior design perspective, that you need to be able to do different styles and to make sure the home’s style and layout reflects the market. You can’t be a one trick pony,” says Mark.

When it came to the home’s layout, it was left entirely in the hands of the couple who spent many hours space planning the design. “We weren’t even given a footprint. We had to work out the boundaries and rooms within the house,” says Mark. The design also reflects the new COVID reality where people live, work and play from home. “The needs of the home are not the same as they were two years ago. You have to flexible about the use of spaces and we took this into account,” says Mitch.

As for the ethics of pitching experienced renovators against total newbies, the couple believe the judges are holding them to a higher standard than the new contestants. “Personally, we don’t have an issue with that. We should be delivering to a higher standard and while they haven’t explicitly said it, we believe they are judging us more harshly,” says Mitch. And the couple have come both last and first in room reveals thus far.

And as for charges that The Block should have more design and less drama (we hear it every year!), the boys tend to agree, but concede that it’s the drama that viewers want to see. “It’s the design aspect that drew us to The Block in the first place, but the drama, intrigue and personal relationships are part of show how and people want to see that stuff,” says Mark.

On the topic of drama, Channel Nine has said that this season features the biggest cheating scandal in the history of The Block. “There’s a thing that really splits the show when someone gets information that they shouldn’t have. It was entirely out of left field and our jaws were on the floor. It impacts the rest of the show, right to the end!” says Mitch.

And as for winning, the boys believe they have built the best house but that anything could happen on auction day. “The house that the judges consider the best in terms of scoring is not generally the house that wins The Block. We’d like to think our house will win, but in the end we’re just so happy to be in the race.” 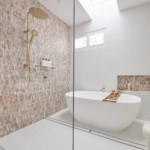 The Block 2021 room reveals: guest en suite
Pretty damn good for week two, don’t we think? Mitch and Mark went from last place last week to win this week. Nice one! Although I must admit Ronnie and… 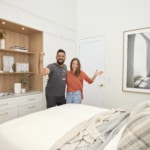 The Block room reveals 2021: guest bedroom
Firstly, let’s talk about what’s new with The Block judging this year: defect lists! What a great idea and something that has probably been lacking thus far. Keith and Dan…
FacebookPinEmailTweet