Last week, we introduced our new series with last year’s Blockheads Julia and Sasha, following their new Melbourne reno. This week, Julia’s talking about the phase before settlement, designing the house and locking in trades.

We bought Little Willow in November last year. The Block had just wrapped and for some strange reason, we missed the adrenaline that goes with having to make a million decisions when you’re tired, stressed, and living off Pot Noodles and Mars Bars. We’ve been told The Block’s like childbirth: hell at the time but a few weeks later you’re all rose-coloured glasses and ready to go again. We’d clearly been downing the Kool-Aid because we were eager to jump in and get cracking. However, the silly season was about to kick off so we cooled our jets and asked for a longer settlement. This was wise for two reasons. One, it gave us time to actually sit down and plan every detail and two, it meant we didn’t have to pay the mortgage for four months. Merry Christmas to us!

The previous owners of Little Willow had already vacated the property and were very kind in giving us access on a few occasions. We had a pretty clear idea of what we wanted to do, and it was made easier by visiting the site before settlement. We engaged a draftsman straight off the bat and worked together on the floorplan. This process typically takes a few weeks but if you’re a Virgo like me (read: super critical/nightmare), expect it to blow out.

Our first renovation took place in the street adjacent to Little Willow so we knew the area well and had an understanding of the buyer we’re targeting. Elsternwick is a family-friendly suburb with excellent schools, shopping, and transport links. It’s only nine kilometres from the CBD and within walking distance to the beach. With this in mind, our best bet was to create a four-bedroom home with enough space for a young, growing family. Easy, right? Well, yes and no. The site is only 360sqm, standard for the area but challenging when you’re trying to wrangle enough space for the Kody Brown clan. So, what were two girls and their draftsman to do? Our aim was to maximise the footprint without creating a monolith. We were determined to keep the front façade, with the addition of French doors and a sweet veranda. Beyond that, anything was possible and after a little to and fro (OK, a lot) we finally agreed on a floorplan we love. 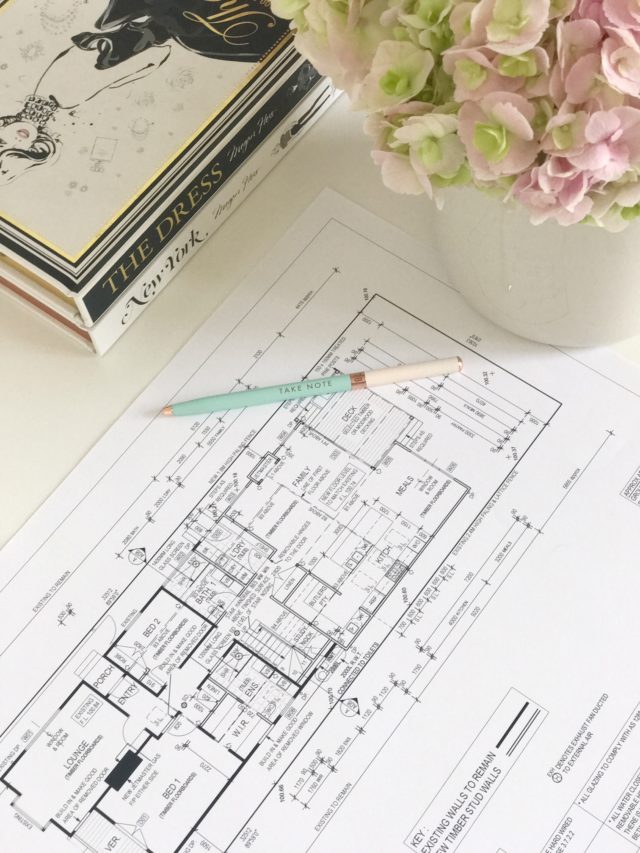 By the time settlement took place, our design was shipshape and ready for the surveyor. One of our primary considerations was council approval, or lack thereof. Given we’re flipping the property, we needed things to move forward at a rapid rate which meant abiding by all regulations including boundary setbacks and window heights. In doing this, our surveyor avoided having to go through council as we only required a building permit. Typically, these are granted within a few weeks so we were off and racing.

As anyone in the property game will attest, budget is everything. Structural renovations don’t come cheap and there’s no point spending squillions if you’ll never get it back. The only way to stay on track is by having a super organised person on your squad. Someone who loves negotiating, paying invoices, and documenting it all in spreadsheets. Enter Sasha. I swear she was an accountant in a past life and knows every damn trick in Excel. (Truth be told, she probably needs to get out more, but that’s neither here nor there.) We set our budget early on, taking into consideration how much we paid for the house and the proposed building costs. Of course, we have a budget and then we have a budget. Builds are famous for exceeding fiscal expectations so we set a reasonable limit then another that’s a-bit-of-a-stretch-but-at-least-we’ll-still-be-able-to-feed-our-dog kinda limit. Once this was locked and loaded, it was time for the nitty gritty: employing trades.

If we’ve learned one thing, it’s this: get as many quotes as possible. They vary so much and it’s important to give yourself enough time to consider your options. We created a scope of work that allowed us to compare apples for apples. It pains me to say but construction’s still a man’s game and we’ve been taken for a ride on a few occasions. It’s a good thing we don’t suffer fools however as those rides were short-lived!

Frank Lloyd Wright wasn’t lying when he said trades make or break a design. Every build is dependant on skill and communication and these traits were top of mind when engaging our team. We developed a great relationship with our builders before they signed on and were upfront about our needs and expectations. Given our tight timeline, delays are an absolute no-go so we’ve been insistent on sticking to a project schedule.

All in all, Little Willow’s off to a pretty good start but I’ve got lots of dirt to dish in coming weeks. Even with two renovations under our belts, there’s so much to learn and we’re the first to admit we’re still guinea pigs.

Send through any questions you may have and I’ll see you next time!