“I was one of those lucky kids that knew what I wanted to be from a young age and I decided I wanted to be an interior designer at the age of 10,” says interior designer Greg Natale who celebrated an incredible 20 years in the business at the end of last year. And with a large interior design business, countless product lines and his own homewares empire in the works, it’s hard not to be impressed by the designer whose work ethic is second to none.

Growing up as the child of hard-working Italian immigrants, in Sydney’s south-western suburbs, Greg found escape in the small screen, with movies and TV shows proving integral in determining his career path. “We didn’t travel much as kids as my father was always working, but I travelled through film and television,” says Greg when describing the genesis of his design passion. And while set design was never considered (“I didn’t even know what that was”), the world of architecture and interiors beckoned with Greg first studying architecture at the University of Technology Sydney, and then interior design at Enmore Design Centre.

“My elder sister is a fashion designer, and my father was in the building industry, so I was heavily exposed to design from a very young age. I guess it was a mash up of all these different things, but I was always a creative kid,” says Greg who is the only son in the family and has four older sisters.

Greg worked for other people before starting Greg Natale Design in 2001 and has worked hard ever since. “You need to be determined, persistent and very patient in this business as things do take time to take off. You really need to believe in yourself and know that rejections are par for the course,” says Greg who has gone from one staff member to a team of 24 who work across his interior design and homewares businesses.

His interior design clients are located all over Australia, and he mainly works on new build large family homes and penthouses, with some commercial work too. Currently, he has a whopping 40 design projects in the works with his large clientele drawn to his singular aesthetic. “For me, it’s important to have a signature style. You do want to stand out from the crowd,” says Greg,

Following on from the success of his interior design business, Greg started licencing his work about 15 years ago, initially with a collection for Designer Rugs. He is now working on his eighth collection for the rug brand and also creates wallpaper ranges for Signature Prints, tiles for Bisazza, tiles and bathroom ware for Teranova and has a fabric range in the works for Elliott Clarke.

And if all of that wasn’t enough, he also launched a homewares line five years ago. Designed in-house at his Surry Hills studio, the range is now sold in Bergdorf Goodman in New York as well as Amara, Luxe Deco and in his own Sydney flagship store in Potts Point.

“We’ve also just launched into all the major David Jones stores nationally. The homewares business is really growing,” says Greg, who explains that while he has a lot on the go it’s all been years in the making. “I’ve been giving the homewares business a really hard slog for the last five years and it only really started to take off recently,” says Greg.

As for career highlights, Greg was thrilled to be named Belle Magazine’s Interior Designer of the year twice. “Winning it twice was a real highlight. I’m also just finishing my third book now which I’m excited about – it’s called The Layered Interior and it comes out in October,” says Greg. And when it comes to his aesthetic, he believes it is always evolving but that he has felt Modernism’s pull of late. “My work is definitely getting more modern and contemporary. I think there is a trend back to Modernism and my work has a lot of modern lines, despite the layers.”

For more on Greg Natale 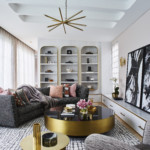