With the kitchen increasingly the hub of the home, it isn’t surprising to hear that Aussies’ spend on kitchen renovations grew by 16 per cent in the past year (to a median spend of $20,000) according to the annual Houzz and Home Australia survey. 8,800 Australians responded to the research that found the kitchen is the most popular room to renovate followed by the living room with the bedroom, bathroom and laundry in equal third place.

“Despite a number of headwinds for the global and national economy, renovation activity continued to keep pace in 2018 and will likely experience a robust growth in 2019. Pent up demand continues to drive renovation activity, while spend on discretionary projects such as kitchens continues to grow, signalling strength in consumer confidence,” says Nino Sitchinava, Ph.D., Houzz principal economist. 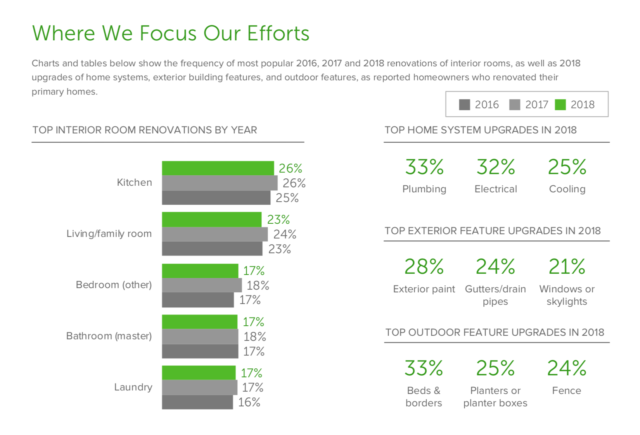 A desire to stay in one’s current home, rather than purchase a new one, seems to be driving the renovation scene – albeit for different reasons according to demographics. Typically, baby boomers and Gen Xers are renovating because they would rather stay put while Millennials (ages 25-39) are renovating because it’s more affordable than moving.

Another interesting finding is that 2018 renovation activity was largely driven by older people with three quarters of renovations undertaken by boomers (ages 55-74) and Gen Xers (ages 40-54) – no doubt because they were in a better position to afford it.

Funding
The majority of home renovations are funded using cash from savings (76 per cent) followed by credit cards (19 per cent) and cash from home mortgage refinance (13 per cent). Predictably, credit card funding was mostly used by Millennials rather than older generations. Engaging trades
90 per cent of renovators hired a professional in 2018 with electricians, plumbers and carpenters in greatest demand – 62, 51 and 40 per cent respectively.

Smart tech
Just over one in ten renovators incorporated smart technology into their renovations via products like home assistants, streaming media players and security cameras. Interestingly, baby boomers are more likely than Gen Xers and Millennials to rank smart technology as a priority.

Energy efficiency
Over two in five (43 per cent) homeowners prioritise energy efficiency when renovating and do this by replacing windows and installing installation amongst other things. The finishing touches
It seems styling concerns are top of mind for renovators with almost two-thirds of 2018 renovating homeowners decorating and furnishing their home within the same year as renovating. This was most important for Millennials (as compared to boomers) who purchased products such as cushions, throws and furniture to complete their spaces.