Greg Natale’s New Wave collection for Designer Rugs has a number of inspirations, with postmodernism and a bold 80s sensibility at its core.

Seven stunning new designs showcase Greg’s flair for pattern and colour, and represent another evolution in his design journey. After the last collection, which was Deco in theme, New Wave embraces the vibrant hues and geometrics of the Memphis movement and the work of Ettore Sottsass. Motifs also reference the architecture of Louis Khan and his use of symbolism, while a splatter design offsets the crisp geometric shapes.

The rugs are available in a contemporary palette of cool blues, greens and lilacs teamed with earthy tones, and mesmerising colour gradients appear as well as stronger block colour. All seven designs can be custom coloured, shaped and sized to suit any residential or commercial space. 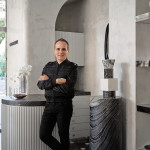