The biophilic design trend continues apace and thus so does our obsession with bringing the outside into our homes as much as possible. Literally surrounded by flora, this Sydney garden was designed by The Greenwall Company founder Mark Paul and it’s just been announced the winner of the Green Space Residential Award in the 2021 Australian Institute of Horticulture Awards.

Mark’s family home is not only a sustainable haven (that has the ability to exist off the grid in the middle of Sydney), but it features an array of innovative landscape features including greenwalls, greenroofs, Eco Pillows and even removable pond gabions.

“There are six large podium planters with one containing a 12,000 litre wetland and pond over the garage. It has greenwalls and greenroofs, rock (lithophytic) and tree plantings (epiphytic). It considers amenity, aspect, cultural requirements, view lines and the needs of a family and two boys who need to understand about vegetable gardens, chickens, fish and tadpoles to name a few,” says Mark Paul of the garden that was built from the ground up. When Mark started the project, the garden had no soil and a sandstone base which makes the end result all the more incredible.

The front of the home features a nature strip of native grasses and hedges that are cut annually. The three front planter beds are mainly planted with natives, in a nod to the adjacent bushland. There are a total of 140 plant species in the greenwall and 240 species on the roof which makes for amazing biodiversity in the one garden.

Recognising excellence in the horticulture industry, the Australian Institute of Horticulture Awards had a huge number of entries this year with projects all around Australia and Singapore putting their hats in the respective ring.

“We are thrilled to have received this award and appreciate the recognition of the 30 plus years I have been involved with the AIH, and the work we have undertaken to find new ways to reclaim the built environment by greening spaces.”

For more on The Greenwall Company 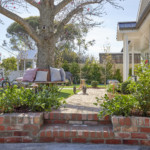 The Block 2021 exterior facade and front garden reveals
It was an emotional night on The Block as the contestants said goodbye to their trades and it sunk in that they were almost done! The scores were a lot…
FacebookPinEmailTweet