It was an emotional night on The Block as the contestants said goodbye to their trades and it sunk in that they were almost done! The scores were a lot closer than last week, with everyone getting praise from the judges. But Mitch and Mark finally took out the top spot for their heritage facade and garden. And Josh and Luke continued to throw tantrums and declare the judges didn’t know anything!

A “modern masterpiece” consistent from front to back, said Darren Palmer. Neale said it was architectural, contemporary and impressive.

Shaynna was surprised how exposed it was, with no protection from the elements at the front door, and anyone walking past could see straight into the kitchen. She thought privacy would have been a bigger consideration. “From a security point of view it doesn’t feel practical,” added Neale.

Shaynna said the garden was more decorative than it was inviting and it didn’t feel like it would be used. But they all loved the beehive!

Neale loved the standing seam Colorbond cladding. “It has a real modern elegance to it. Ronnie and Georgia have this ability to make a strong statement but in a very subtle way. They’ve kept that signature that is instinctively theirs. They know what they’re doing.”

Does this facade have street appeal? Yes it does, heaps, the judges said. And it would appeal to buyers.

A “perfect” white (aluminium) picket fence, paved pathways that look like they’ve been there for years, a tree wrapped with seating for watching the world go by and grass – complete with cubby house and trampoline for children to enjoy – Mitch and Mark’s front yard was just what the judges wanted to see.

Shaynna called it an absolute knockout. She loved the cubby house and trampoline and the recycled brick paving. The tree was a gift from the Gods but creating seating around it was brilliant, Darren said.

“Storytelling at its best!” Neale summed up. “The family lifestyle dream. You could not have done a better job of wrapping up this house. They have created an incredibly welcoming facade and front garden. The house feels like it’s been here forever. It’s going to appeal to the widest possible demographic.”

“I’m so pleased they weren’t tempted to do a Palm Springs garden with the cactus. It would have been a bit much,” said Neale.

“I’m surprised they chose the same plants we said don’t go with the period of the house,” Shaynna said. She loved the cricket pitch but would have liked more plants like grasses that fitted with the age of the home.

Darren liked the diagonal lines and the addition of the brick as a design feature that tired in with the fireplace. He said it was visually interesting and a lot of thought had gone into it.

Neale would have liked to have seen something bigger and more dramatic but that they’d probably done the best they could on a budget.

“I think that what they’ve done really does help sell the dream of this house,” said Darren. It was an architectural dream for a Mid Century enthusiast.

“Simple, structural elegance!” said Shaynna as they walked up Josh and Luke’s driveway and the praise didn’t stop there. From the mature olive tree standing against the grey rendered wall to the inviting front doorway and offset front yard, with a secluded workout space to one side, this was the ideal way to represent the best of what the twins had delivered inside, Darren said.

“Seeing the house in the state we saw it last week I thought we’d be lucky to see anything. But this is just so cool,” Darren said. Neale said: “It has become a different building.” The established (uplit) olive tree was a hit with them all.

“Josh and Luke needed a comeback and boy, have they delivered one,” said Neale.

The front wall, however, was a jarring rustic note in an otherwise minimalist modern space. “There’s not one rustic note throughout the rest of the house.” (As usual, the boys didn’t take the negative parts of the feedback well at all and said the judges had no idea what they were talking about!).

Overall the façade, with its soaring skyline and modern outlook, left the judges smiling. Darren said it was close to being great.

“Look at this, it’s the grand entrance,” Shaynna said. The judges loved the arbor, the lighting, the star jasmine. “Honey, I’m home!” Neale declared (for the second time!).

Shaynna said it was beautiful, Neale said it was amazing, real family life, selling the dream. “It has a sense to me of suburban grandeur.” Neale said his head was spinning at the sheer size of the block, offering almost country style living.

Darren said they had the same privacy issue as Ronnie and Georgia and they should frost the front door. But everything else was superb: colourcheme, Colorbond, weatherboard. “I love everything,” Darren said. While the house could have been a poison chalice because of its size, they had made the absolute best of it. “They’ve done every inch of this justice.”

Neale said he thought it was the best house The Block had ever delivered. “In all my years of judging The Block, I can’t think of a better property than this.” 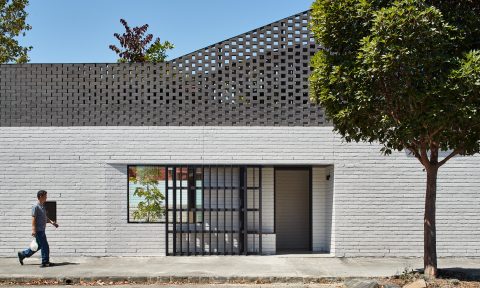 Charlie Albone’s top gardening tips for inside and out Back yard makeover: where to spend and where to save