There’s few things I enjoy more than ogling at gorgeous homes. There’s just something so exciting about taking a sneak peak behind the curtains and imagining a life lived beside them. The much-anticipated release of Belle Beautiful Australian Homes Volume II plays right into this obsession. Featuring 40 envy-inducing residences, from timeless to contemporary to the truly cutting edge, the 348-page hardcover showcases the work of the country’s most celebrated architects and designers.

Below is an excerpt from Belle Beautiful Australian Homes Volume II, featuring an exquisite home in the Melbourne suburb of Toorak. 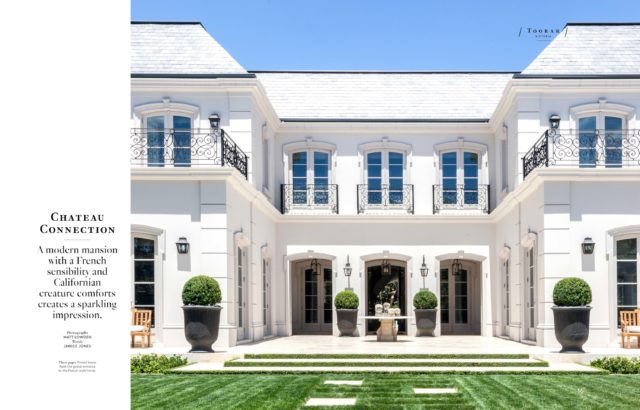 Regally positioned at the rear of a generous sweep of emerald lawns and manicured gardens to give a sense of arrival and grandeur, this classically styled Toorak mansion wouldn’t look out of place in French wine country.

The seven-bedroom mansion comes with all the accoutrements you’d expect for a property of this scale: six ensuites,  a magnificent marble staircase, generous kitchen with double of everything, expansive two-table dining room, a huge pergola, a 25-metre swimming pool and spa, as well as an underground parking garage, an internal lift and, for the children, a sunken trampoline.

Completed in early 2012 following three years of planning and another three years of construction, this home is modelled on the finest examples of classical French architecture by its designer, architect Russell Casper of CAD Architecture & Design in Melbourne. He collaborated on the project with San Francisco-based architect Andrew Skurman, star landscaper Paul Bangay and sought-after Sydney interior designer Thomas Hamel and creative principal Dylan Farrell. 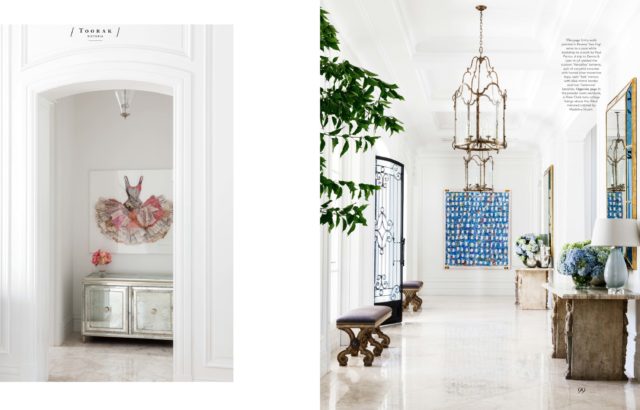 The owners had four young children and number five was born during the process of building the house. Based in San Francisco for the entire build, the couple were returning to Australia to live for family reasons.

“I was the conduit between California and Melbourne since they were expecting their fifth child,” explains Thomas. “I would regularly visit with suitcases laden with marble and carpet samples, and lots of photographs.

“Los Angeles is our biggest shopping market – the showrooms in California really suit Australian lifestyles,” says Thomas, who divides his life between Sydney, where his office is based, and his home in LA. The challenge for Thomas and Dylan was how to give this classic home a contemporary twist and make it fresh and new. 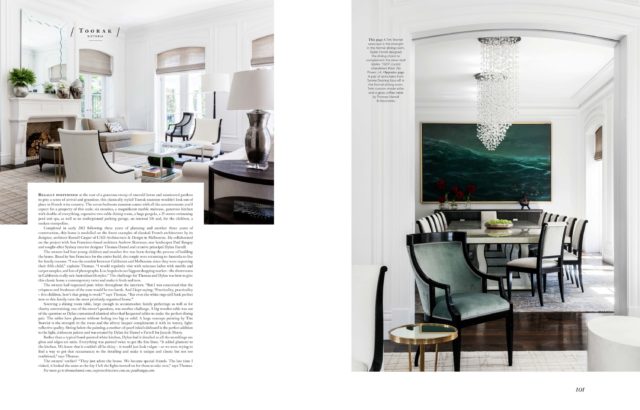 The owners had requested pure white throughout the interiors. “There were to be no beiges, not even a yellow or grey tinge,” says Thomas. “But I was concerned that the crispness and freshness of the tone would be too harsh. And I kept saying, ‘Practicality, practicality – five children, how’s that going to work?’”

Thomas says he and Dylan typically choose rugs first and decide how they will feature in the room as they set the tone for colour and pattern. “We tried many wool and silk rugs but they kept getting rejected because they weren’t a pure enough white. The rugs we chose for the living areas all have white silk in them, which scared me to death at first. But they still look perfect now as this family runs the most pristinely organised home.” The next challenge was to source a dining room table, which had to be large enough to accommodate family gatherings as well as for charity entertaining, one of the owner’s passions. A big wooden table was out of the question amid the ethereal, light, white palette so Dylan customised identical silver-leaf lacquered tables to make the perfect dining pair. The tables have glamour without feeling too big or solid. The large seascape painting is the strength in the room and the silvery lacquer complements it with its watery, light-reflective quality.

The dining chairs have dark contrasts which add drama, especially in the evening. “But the question was how to design the chairs and table as  a suite?” says Thomas. “A strong crossbar at the top of the chair means the eye would just ‘read’ those, so Dylan came up with a special upholstery detail using two fabrics which tied it all together.”

Sitting below the seascape, the mother-of-pearl inlaid sideboard is the perfect addition to the light, iridescent palette and was created by Dylan for Hamel + Farrell for Jean de Merry. 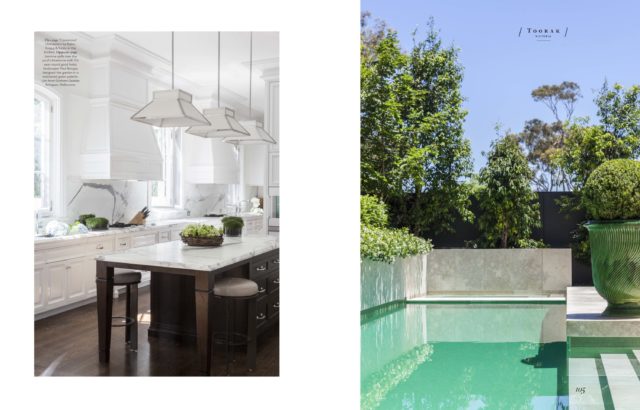 Rather than a typical hand-painted white kitchen, Dylan had it detailed so all the mouldings are gloss and edges are satin. Everything was painted twice to get the fine lines. “It added glamour to the kitchen. We knew that it couldn’t all be shiny – it would just look vulgar – so we were trying to find a way to get that razzamatazz to the detailing and making it unique and classic but not too traditional,” says Thomas.

The owners’ verdict? “They just adored the house. We became special friends and were invited to family occasions. The last time I visited, it looked the same as the day I left the lights turned on for them to take over,” says Thomas.