Home to a young couple, who have just returned from the UK with a baby on the way, this gorgeous newly renovated home has a decidedly European feel despite its Melbourne locale. A refined renovation of an existing Californian Bungalow, the home’s original architectural details have been preserved with the new light-filled extension makes it ideal for a growing family.

“The couple were previously living in the UK and wanted to return to their antipodean roots, embrace the natural light they had missed in London, and make it the heart of the home,” says the couple’s friend and interior designer Ryan Fernandes who worked alongside architect Angela Prince on the Bentleigh home that was built by Construct Melbourne.

The original home’s labyrinth-style layout was replaced with one with much greater functionality. And while the couple favoured clean lines, they were after a relaxed, classic feel with a twist – a palette of blues, greys and whites feature alongside pops of red. Blackbutt timber floors and polished nickel fixtures complement the home’s traditional-style entrance and ornate heritage ceiling while the interior styling includes Danish design pieces alongside antique fabrics.

A standout space, the kitchen features handmade Moroccan tiling and white shaker-style joinery paired with a black range cooker. Nearby, a built-in custom bar works to merge the kitchen and living spaces – it gets plenty of use after dark.

One of the loveliest aspects of the home, pops of green that can be seen from several of the rooms. The living area looks onto a wall of greenery enjoyed alongside a homely gas log fireplace and sophisticated wall sconces. Nearby, the bathroom features rich blue tiles as well a freestanding Victorian claw foot bath – a timeless design that makes the space.

Overall, the final design successfully preserves the home’s lovely historical features while feeling thoroughly modern throughout. And it’s all the more impressive when you consider the home is nestled amid apartment buildings and flats.

For more from Construct Melbourne 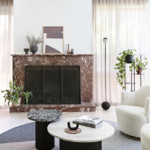 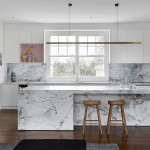 Melbourne heritage home renovation with pops of colour & texture
Located on a generously proportioned block in Melbourne’s Toorak, this grand 1930’s home was renovated and extended recently with Lucy…
FacebookPinEmailTweet