After a 10-year career in the corporate world, Demian Carey Gibbins decided to dramatically change direction. Feeling like he was living for his job, he made the decision to take action, to search for significance and make his life count. So without anything lined up, he handed in his resignation (much to his boss’ surprise!) and returned to his childhood love: painting. 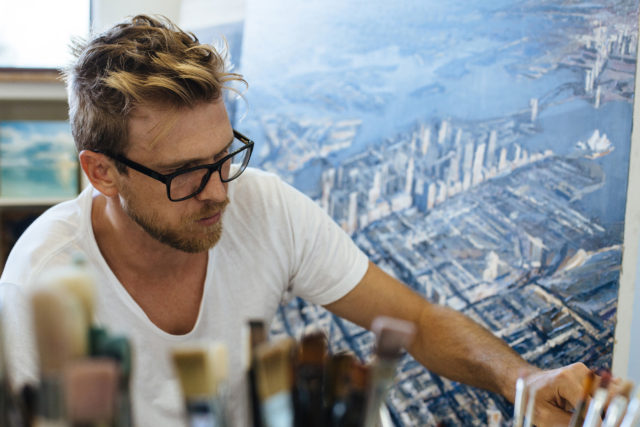 “Since I resigned in January 2014, I have spent several months painting, made it to the semi finals of the Doug Moran National Portrait Prize with a painting of celebrated musician Jon Hume and coordinated a successful exhibition of reformed Bali 9 ringleader Myuran Sukumaran’s paintings in Melbourne with Ben Quilty and Julian McMahon. I also travelled a lot, meeting interesting people (including Myuran) and being creatively inspired.”

What immediately stands out when Demian reflects on his first year as a full-time artist is his collaboration with Myuran. Working as the exhibition and event manager for last year’s exhibit, Paintings from Kerobokan Prison – By Myuran Sukumaran, the experience was something Demian was originally hesitant to get involved in. “When I first got asked if I’d like to help run a show for this man on death row, who has been convicted and was guilty of trying to smuggle heroin, there was obviously a sense of hesitation. So I had to think about it. I started researching art rehabilitation, especially in respect to prisons, and I was blown away by what a worthwhile endeavour it was. So I quickly changed my mind and got involved.”

For Demian, it also became apparent how amazing the effects of art rehabilitation had been on Myuran, getting to watch him work up close and personal in the Bali prison. “Before he was moved (to the execution site) he was running art therapy classes for the other inmates. He’s very motivated, focused on being productive, making himself useful and giving other people purpose. Then you add to that – and this is what really tipped it for me — his art is incredible. I’ve got a couple of his works on my walls.”

Alongside managing Myuran’s exhibition, Demian is also in the midst of preparing for his own show, which will open on 12 June in a pop-up space at Mirvac’s soon-to-open Array development in Melbourne’s Docklands. “My upcoming show will be a culmination of two years’ hard work. Inspired by the places I’ve been and the people I’ve met, it will showcase a considerable amount of work.”

Specialising in landscapes and portraiture, Demian’s central focus is perspective and texture — he even encourages people to touch his paintings! Inspired by impressionist and post-impressionist artists, his body of work, at first glance, may not seem all that cohesive. “A comment from some people is that my work is quite diverse. But I guess for me, I paint cities because I live in the city and cities have had a really significant impact on me. However, for me the thing that is most memorable about the cities I’ve visited is the people I’ve met, so that’s where the relationship between my landscapes and portraiture comes in. And you’ll definitely see it in my show!”

Demian’s art is available through his website. For more information.