While a fail-safe option, neutral beachy interiors can run into bland territory, but that is certainly not the case with this seaside Sydney residence. Layers of texture including terrazzo, marble and dark timbers combine with light filled spaces to make this renovation a much more sophisticated take on coastal cliches.

“We wanted to create beachside elegance, so we combined sandy terrazzo colours with the formality of a dark veneer. For example, the marble bench top and splash back in the kitchen is quite formal but the terrazzo floor tile makes it feel more casual,” says interior architect Emily Hollier of the home’s tactile materials palette.

Circle motifs run throughout the home, inspired by the original 1920’s home’s decorative arches. “The front door handles are circular, and there’s circular shapes in the bathroom cabinetry and wall lights. This was taken from that language of the original arches,” says Emily.

Located beside the ocean in Clovelly, the original semi-detached house was very rundown before Emily and her team commenced works on it. Key to the design brief was increasing the home’s height and volume to create space for the owners and their two small children. “We opened the house right up to create a much bigger feeling house,” says Emily.

After the existing rear of the south-facing home was removed, a brand-new structure was built, designed to capture the light. “Bringing a maximum amount of light into the space was key so we utilised skylights and windows in different forms to do this,” says Emily.

The new rear extension has several highlight windows and four other skylights were included in the design too; one of which is outside. “The owners wanted an enclosed awning that allowed them to sit outside year-round, but they wanted light to penetrate through it,” says Emily of the unique design feature (first picture above).

The home’s spatial flow was also redesigned with Emily adjusting the levels in order to create a more fluid experience when moving from the interior living area to the backyard. “We lowered the living area so that it connected with the backyard as the owners wanted to be able to watch their children playing outside. Having that visibility was important,” says Emily who chose hardwearing and sturdy finishes with the children in mind. 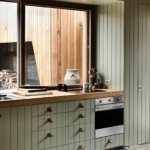 Green timber panels star in celebrated coastal home
The inaugural Inside Out Brickworks Home of the Year awards took place last night with a stellar line-up of Aussie houses singled out for their design originality. And while it…
FacebookPinEmailTweet