Originally from Italy’s Amalfi coast, Sydney based Teresa Vigroux spent many years in France before moving to Sydney six years ago with her French husband. After working in France as an interior stylist, she completed a Diploma in Interior Design at ISCD, and has worked in interior and property styling as well as visual merchandising ever since. She has also just released a range of unique cloud-inspired mirrors under the Instagram handle ‘A Frenchman’s Wife.’

While also leading a busy life as a mother to two boys, Teresa started to dream of starting her own business and was keen to do something creative. “One day I decided I wanted to make mirrors and I thought it would be interesting to do some kind of sculpture on the mirrors too.” She explored many materials before settling on using a filling foam that is typically used to insulate wall cavities.

“I came across the foam and tried to use it to make sculptures and mirrors and even furniture. As soon as I started working with it, I realised that it looked amazing,” says Teresa of her new range of mirrors that are part of her aptly titled ‘Cloud Collection.’

An unusual aesthetic, the mirrors were inspired by a childhood penchant for cloud-watching – Teresa used to lay on the terrazzo in the south of Italy and watch the marshmallow-like expanses travel by. “I will never forget the fun we had looking for animal and shoe shapes in the clouds. This collection is also a memory of my childhood.”

A fast-curing, expanding material, Teresa works quickly to create each mirror before painting over the foam with water-based paint and a paint protector. And while the business is in its early days, she has sold around 30 mirrors in the last six weeks, mostly via Instagram and word of mouth.

“I have had a lot great feedback from people in design and fashion. I’ve had models, influencers and ordinary people contact me and I have customers all over Australia, and in the USA as well.” 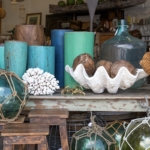 Vintage coastal décor: shipped worldwide from Noosa
After a decade working on super yachts, sailing the Mediterranean and Caribbean, Sally Oulton returned to Australia, became a mother and found herself living in the hills behind Noosa. “I…
FacebookPinEmailTweet