Mitch Edwards and Mark McKie were the oldest Block contestants ever when they took part in last year’s show, and they were certainly popular. Having had a chance to watch this year’s show, the couple reflected on their experience with us, sharing how they never fell out, what they learned and, importantly, what they’d advise the current couples.

As the oldest contestants to ever do The Block we took on the enormity of the renovation and succeeded. We won on the scoreboard but lost at the auction but we consider ourselves winners overall. We won amazing friends in our builders, and incredible support from so many people who watch the show. Our house was the most viewed online, we bought to The Block real interior design, rather than interior decorating and showed that at any age you can do whatever it takes.

Interior design is not just about styling and finishes but considering how people live in a space and the functional use of the space. Interior decorating sits within this framework, creating beauty amongst function.

We believe the two belong together, and you cannot consider interior decorating without considering function. Not all Block houses understood this relationship. This is the reason we completely changed the way our house was designed and engaged the architect in those changes. We drew up plans for all rooms, thinking about how they would work for the eventual owner. This planning was considered and we engaged with our builder from hipages and real estate experts about the market before we made the changes.

We loved that challenge and the excitement of doing something different. If we did it again, we do it the same way: plan, think, research and implement.

Once we made the big shift with the upstairs entertainment area, we saw other teams reactively redesign their floor plans. We took this as a compliment, that we could create the ‘permission’ for others to think laterally. For some teams, their reactive planning resulted in strange proportions between rooms, sacrificing functional living space and storage space (we never understood what a PM wardrobe really was? – does anyone?)

Watching the new teams take on The Block 2020 brings back memories of early morning planning sessions with our building team, long days of removing rubble, late nights of painting, double guessing decisions. We lived on adrenalin during the 14 weeks of the build, and it wasn’t until we finished that we noticed the physical toll taken on our bodies. The current Block contestants will probably find the same thing.

The biggest thing we miss about The Block is working with our amazing building team; our hipages angels! We were the luckiest people on The Block; we got lucky with our team. We didn’t ‘sack’ people like some teams, or bargain tradies down to ridiculous hourly rates, or berate them for not working hard enough. Our job was to make their job easier, and that’s what we committed to do.

The result was clear, every week we were well ahead of all other teams. This comes from knowing how to create the best team to achieve great results. It wasn’t until we watched the episodes go to air that we realised some teams couldn’t understand this, and accused us of having more trades on site, with one team even suggesting we paid from our own money. No, we didn’t. We just created an amazing team we valued and respected, and therefore they were invested in us and achieved great results.

This is what makes us most proud about our Block experience. That and creating an incredible house that people loved. While we were on The Block, we learnt many things, but most of all we learnt how great we are as a team, and how much we respect and care for each other. When things were tough, and either of us wanted to walk away, the other would ‘lift the load’ and carry us through.

Many people we talk to said they were amazed that we never argued. We were the only couple on The Block in 2019 that didn’t argue. We didn’t always agree on everything, however we’re experienced enough to know what’s important and treating each other well was so important. We never understood people lashing out at each other, especially in front of cameras. There apparently was one couple that argued over text to make sure it didn’t get captured on camera.

We also learnt to trust our design decisions. When we second guessed ourselves, or took on too much feedback, we strayed away from what is unique to us, which is the fun and colour we brought to our rooms each week.

The Oslo was so big! We didn’t know anything different, and all the teams pushed through to deliver huge rooms with some amazing results. Watching The Block 2020 gives us a renewed appreciation for what we achieved in 2019. The scale of The Oslo was unique and will likely never happen again on The Block.

Every Block is unique and is the biggest for the teams who take up the challenge every year. For this year’s teams, we would encourage them to play hard, work hard, and don’t give up. When it seems overwhelming, that’s when you push through, and discover that as humans we can achieve some remarkable results.

Mitch and Mark are ambassadors for Hipages, a better, smarter way to connect tradies and consumers and get the job done well, proud sponsors of The Block. 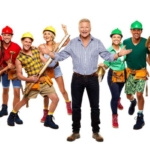 The Block 2019: Newlyweds & gay grandads to star!
Hitting screens on Sunday 4 August, for its 15th (wow!) season, The Block 2019 looks set to be an interesting one. The competition will play out at St Kilda’s Oslo… The Block 2019 auction results: A surprise win?
If you’ve been following The Block, I think you’d agree that last weekend’s auction results threw out a few curve balls; none more surprising than the series’ underdogs Tess and…
FacebookPinEmailTweet