There was a lot to love about last night’s bathroom reveals, if you ask me. I wrongly assumed Julia and Sasha would win but they were knocked into second place by Dan and Carleen, who took out first place by just half a point. And, on reflection, while I really loved both their rooms, Dan and Carleen’s was certainly more true to the Art Deco period while cleverly feeling modern and on trend too. The top two bathrooms really were both beautiful.

Anyway, here’s a recap of the scoring and what the judges had to say…

Karlie and Will: 3rd place and 27 points 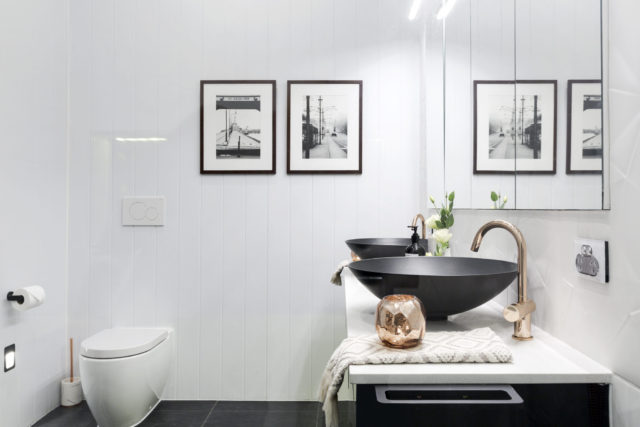 Last week’s winners continued to impress the judges this week with their sophisticated look, perhaps even more so because they’re only 25. Shaynna said the room was glamorous and she felt good in it.

Neale love the combination of the paneling (actually a money-saving measure) and the tiles and the simplicity of the colour palette. Darren also thought the panelling was a great idea.

Shaynna and Neale both loved the prints which referenced Melbourne in the era. 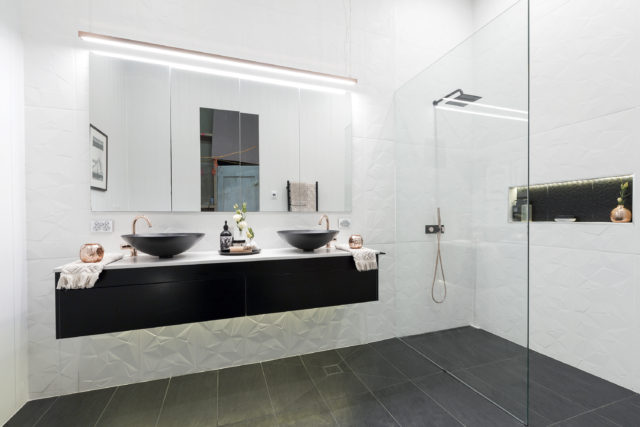 Darren was “completely, madly in love with” the basins and the light above the vanity was Shaynna’s favourite thing. She said: “It feels young and modern but also very sophisticated. These kids have style!” 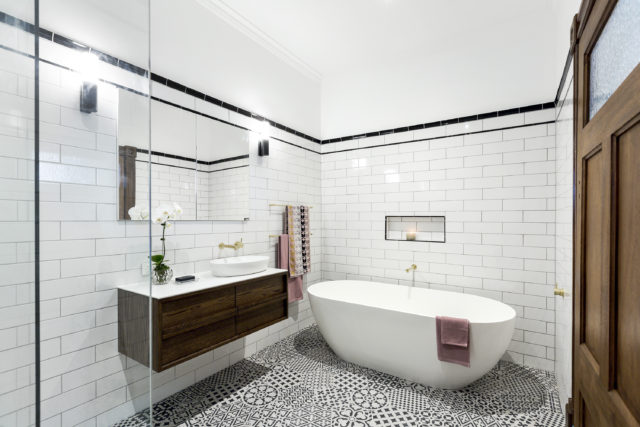 After some shocking feedback (and some would say a shocking room) last week, Dan and Carleen certainly managed to bounce back and show everyone what they were capable of. I personally loved it and agreed with everything the judges had to say. Neale was wowed and said the couple were definitely back in the game (don’t you love it when this happens on The Block?) and that it had such a great sense of period.

Shaynna said the vanity was stunning and the basin, gorgeous. Darren said it delivered exactly what they were probably hoping to deliver in week one; it had all the trend notes and cleverly, still delivered something of a bygone era. 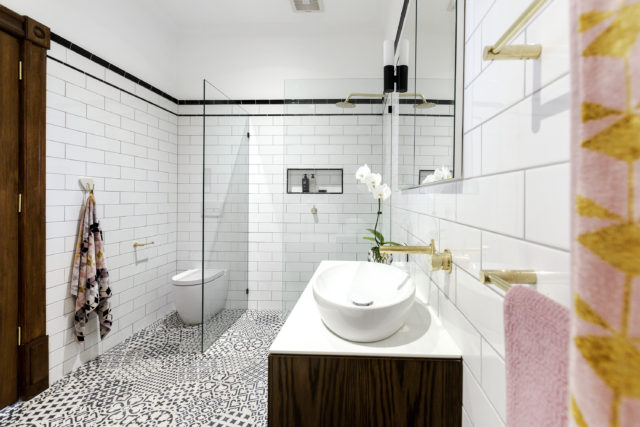 Neale was particularly pleased to see the pared back and simple styling and Darren called their look new traditional, reminiscent of trends he’d seen from Milan. They did get knocked for having their light switches outside however. 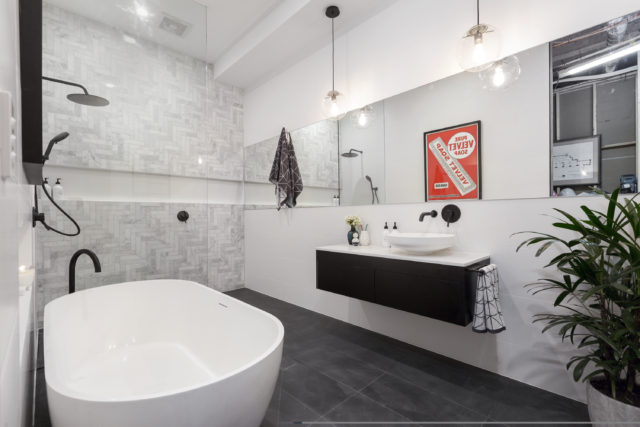 Andy and Ben seriously stepped up their game this week and I thought they produced a very good bathroom, if not my style. “These boys are growing before our eyes,” said Shaynna. Neale said the artwork was a touch of genius. 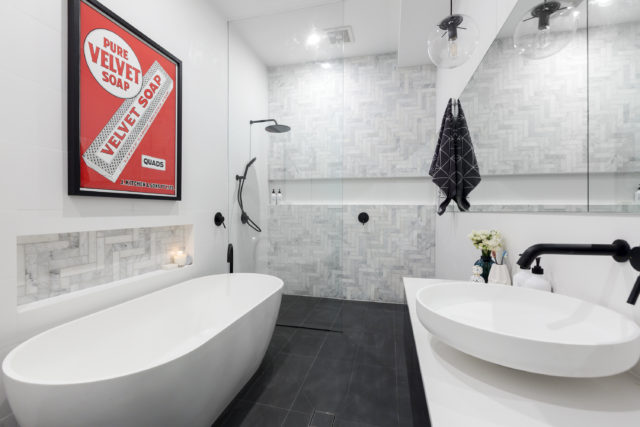 All the judges felt that visually, everything was spot on. But their decision (or mistake) in not including a toilet made no sense and it clearly lost them a lot of points. 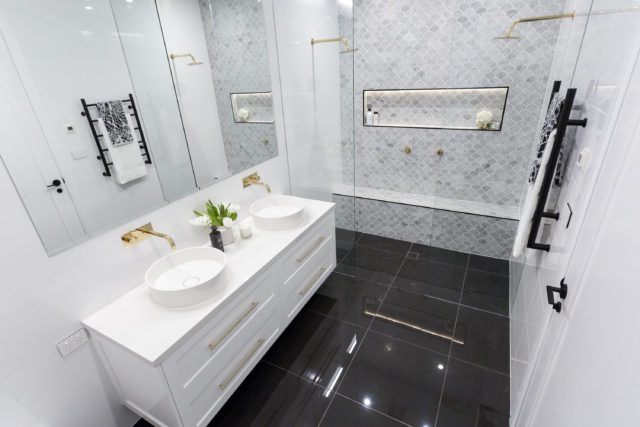 That vanity! The gold tapware! The tiles and the double shower! Sigh! Just gorgeous. I really loved this.

Shaynna said the vanity was stunning and Darren agreed it was beautiful due to each detail. “Everything about that is just perfect.” Neale said it was a bit of a wow moment.

Shaynna said the feature tile was beyond beautiful and “it’s everything you’d want out of double showers.” 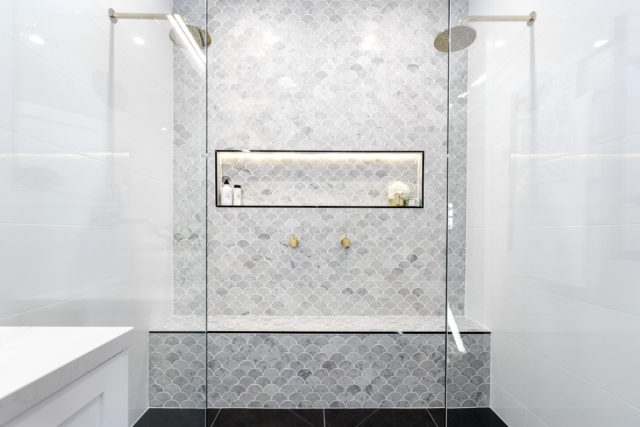 Neale said the bathroom will have massive appeal on auction day and styling wise, they’d really nailed it. He felt the lights should be a bit lower though.

I feel so sorry for these two because they seem so damn nice, and positive, and hardworking! But, as Shaynna said, they really don’t “get” Art Deco, I don’t think. Shaynna said it was a mish-mash of chrome, black and gold. Darren said (sarcastically, and while struggling to hide his horror!) that more was obviously, more. And Neale said he felt like they’d now delivered three rooms from three totally different periods and their apartment was in danger of becoming a museum of rooms through the ages! Eep. 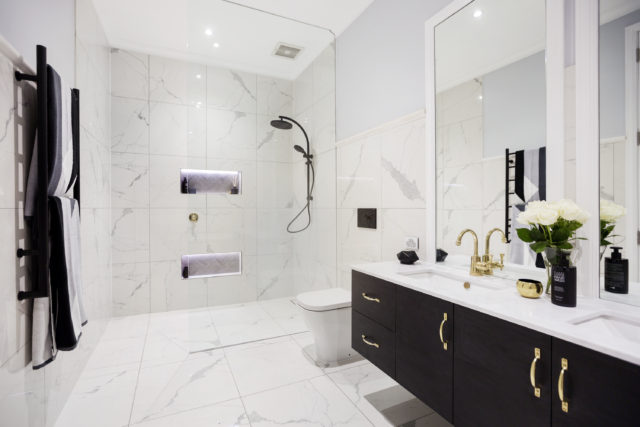 “What is this panelling?” asked (again horrified) Darren, while Neale said he liked it. Darren clearly thought Neale had lost the plot but the overhyped TVCs promising a big fallout between the two male judges were, as I suspected, totally over the top. 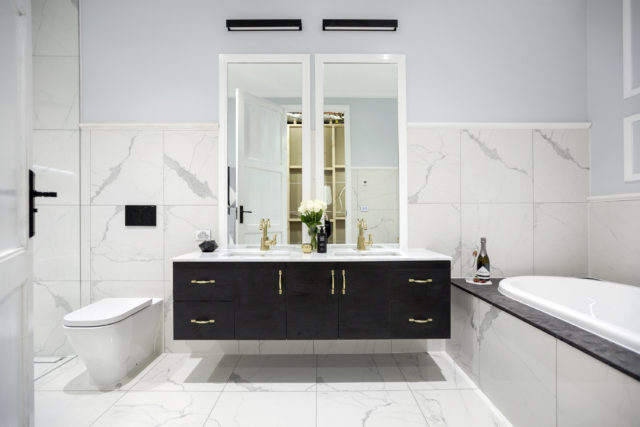 Neale said despite the errors it was still an elegant bathroom with so much space (they changed their floor plan) and buyers would walk in and be impressed.

Next week: another guest bedroom and robe.