Hallways, powder rooms and laundries. Hell week on The Block was a LOT.

If anything was going to make a statement, it was Ronnie and Georgia’s gallery entrance hall, full of beautiful art including a Jai Vasicek original. “It just sings, doesn’t it!” Darren said as the judges walked down the sun-soaked (thanks to a string of Velux Skylights) corridor and into the living room. Next to impress was the steel-frame door separating the living area from the bedroom hall – again dripping with art – with a fully lined attic storage area above, followed by a laundry that ticked all the boxes.

A glass floor in the hall to bring light downstairs, beautiful artwork above, and a hallway that smoothly and effectively separates the living and sleeping areas of the house, this was a well-planned and well-executed space that was definitely something for the judges to love – especially when they realised it led to a full-size pantry, something they’d searched for but failed to find back in kitchen week! Next surprise was the versatile, fully equipped laundry with garage access offering an impromptu mudroom and more storage, to complete the home. It all added up, Neale said, to a “pretty damn good” way to tie things together.

With a huge aluminium and glass door to separate the living room from the hallway while still bringing light to a small, but functional office and an art-lined corridor with its own powder room this was the ideal way, the judges said, to separate the home’s spaces. A switchboard cover on display brought them down, as did a polarising mirror that might be a bit too much for some, but into the laundry and Shaynna at least was smiling again at the ample storage.

“This is the embodiment of hell week, ” Darren said.

The powder room was so claustrophobic, Shaynna just wanted to get out.

But the laundry was finished! “This is like a breath of fresh air,” Shaynna said. “This whole laundry makes sense,” said Darren. In fact they said it was one of the best planned spaces they’d delivered.

Good on the boys, they took the judges’ constructive criticism very well.

Poor Kirsty finding out her Nan died this week was so heartbreaking and it was lovely that other contestants chipped in to help them finish.

“This couple astounds me,” Neale says.

“They’ve made it perfectly contemporary Hamptons. It feels homely from the second you walk in the door,” Darren adds.

They were gobsmacked by the huge powder room (make that bathroom) with its shower and double vanity. Neale said but was phenomenal and Darren said it was glorious. “There is no trace of panic or chaos,” said Neale.

They loved the beautiful laundry which Neale called yummy! Shaynna kept asking how on earth they achieved it?! “It’s 100% focus on functionality but without any sacrifice.”

“Holy moly this is a mother of a house,” Darren said.

Another well-deserved win if you ask us!

Shop the looks, room by room, at The Block Shop.

The Block 2021: Living and dining reveals
It was a close one last night with Tanya and Vito’s quirky sunken lounge and Ronnie and Georgia’s broad appeal grey, white and gold room tying first place. But only… 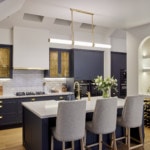