This Brisbane character home was transformed recently under the watchful eye of interior designer Polina Radchenko who worked on the project alongside architects JMH Design. The family home, located in Kedron, was entirely reinvented – it’s now bigger (a second storey was added), much more light-filled, modern and has increased flow between the spaces too. The overall outcome is impressive indeed.

“I used fresh colours and the more traditional joinery features pick up on the character of the home. A clean, sophisticated palette features a light airy base, rich timber accents, soft textured stones and tiles that add rhythm and visual interest to the space,” says Polina.

While the whole home was renovated, particular emphasis was placed on the functional areas of the house including the kitchen, three bathrooms, laundry and the master bedroom’s walk-in robe.

The heart of the home, the new kitchen is markedly different from the home’s previous one which was desperately in need of renovation and light. The space features traditional off-white joinery (that speaks to the home’s heritage) as well as textured kit kat tiles, complementary walnut timber flooring, floating timber shelves and contrast island bench sides.

“Combining beautiful joinery with gunmetal fittings, timber accents, beautiful stone benches, state-of-the-art appliances and a spacious butler’s pantry, the kitchen would be the envy of any chef,” says Polina.

Another key part of the renovation, the bathrooms feature full-height Moroccan tiles, nude stone benches, soft timber cabinetry and contrasting gun metal fittings. The tranquil master ensuite has a luxe double vanity and a freestanding bathtub – the latter featuring in the home’s second bathroom too.

“Parents will not have to share this bathroom with their children, who have an equally beautiful main bathroom with another freestanding bathtub and a separate toilet,” says Polina.

The home hit the market this month, not long after renovation. It sold for $1.9 million which was well above reserve and broke the sales record for the suburb.

For more on Polina Radchenko 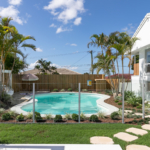