Originally built in the 90’s, this home’s original kitchen was in dire need of some love when Melbourne’s Haus of Cruze design studio began overhauling it recently. Completed as part of the Bunnings ‘Make it Yours’ web/tv series, the kitchen makeover is rather impressive. Particularly when you consider that it was completed within just two days, with a budget of $5,000 that included the nearby dining room too.

“We capitalised on upcycling projects such as the cosmetic updates to the bench tops and joinery. We used the fabulous Dulux Renovator Range products and ensured we didn’t introduce any costly structural changes,” says Haus of Cruze’s Jamie House who adhered to a ‘classic coastal meets California cool’ design brief. “We wanted to create a casual Australian flavour that speaks to the quintessential Australian lifestyle – casual, unfussy, calming, natural and lived in,” says Jamie’s business partner Az De La Cruz.

Arguably the hero of the space, the kitchen bench was renovated with a Tasmanian oak half round dowel feature panel; an impressive DIY project that preserved the budget and allowed the team to inject more money into the flooring. “We assembled it in just a few easy steps, and it really helped to elevate the space by bringing in some warmth and texture,” says Jamie.

The new flooring was a huge improvement on the original also; it’s now comprised of Smart Flooring waterproof hybrid vinyl planks in Highland Grey. The pantry door was overhauled with Easycraft EasyVJ Panel and the room’s paint colours were updated in the form of Dulux Tirau Double on the cupboard fronts and Dulux Panda Pod on the walls.

Rather than purchasing new furniture, the team sourced one-off pieces from Facebook Marketplace to upgrade the kitchen bench area. Vintage rattan bar stools add unique character and allowed the team to add feature pendant lighting above the bench and sheer curtains to the room.

“We’re really proud of the feature dowel under the kitchen bench. It really set the tone and lifted the space with a nod to luxe living. Overall, I think we created cohesion and harmony between both spaces and really nailed the brief.”

Watch it come to life below: 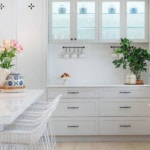 A coastal farmhouse style kitchen renovation on the Gold Coast
Part of a wider home renovation (that interestingly was managed entirely online), this Gold Coast kitchen was the final room to get the makeover treatment. “The only room letting down…
FacebookPinEmailTweet