When I saw Sharon Farrell’s DIY kitchen on Instagram I was so impressed I just had to know more! Painting the existing dated cabinetry, changing the lighting and flooring gave it a whole new, more modern look for just a few thousand dollars.

As well as painting, Sharon and her husband, who bought their sixties home in 2019, replaced the lino with hybrid floating flooring, bought all new appliances and lighting and put in French doors. They still managed to keep the total spend to just $6.000; a fraction of the cost of a full reno. And they did everything possible themselves, with a lot of time and effort!

They really did paint everything: walls, ceilings, window frame, splashback tiles and of course, the cabinets. “The original cabinetry was in pretty good shape but terribly dated, so we pulled the thermofoil coating off, sanded, primed and painted everything, replaced the handles and it’s come up a treat,” says Sharon, who is director of The Online Makeup School. “It’s been a few months and it’s holding up perfectly.”

They also replaced a small sliding door to the living room with double French cavity sliders which helped opened up the space and bring in more light. “We live in the Blue Mountains so it gets a bit chilly here for full open plan living. But this is a great compromise as we can push them into the wall in summer and close them up to keep the heat in in winter.”

Perhaps surprisingly, what Sharon thinks made the biggest difference though is lighting! “I can’t overstate how important good lighting is! We got rid of the old oyster ceiling lights and had downlights installed throughout the space. That was absolutely game-changing.”

The professional makeup artist, educator and influencer says she and her husband did everything bar the electrics and cavity sliders themselves, all while keeping their three year-old entertained! It took about six weeks while juggling work and other commitments.

While nothing was particularly hard, the most time-consuming part was painting the cabinets. “It took about two weeks between removing them, taking off the thermofoil, priming and painting, then waiting for the paint to fully cure before re-installing them. It was painfully slow!”

And while the green cabinets are perhaps the most obvious change, Sharon, who is pregnant, says if the “heinous” old lino floor and dated lighting remained, it wouldn’t look anywhere near as good!

She loves the end result. “It is a totally different space now, I used to hate being stuck in that dingy, grotty space. Now I relish time in the kitchen. It was so worth all the effort.”

It will be a stopgap for a few years at least, and the couple plan to eventually extend and make a larger kitchen/dining space overlooking a pool (the dream!). In the meantime, they’ll be enjoying their fresh green kitchen and saving up!

Is it worth the time and money to do a stopgap kitchen like this? “I think it depends on how long you need to wait to do your full-on reno, but for us, it was 100 percent worth the effort and cost as we most likely won’t be tackling the major works for at least three years,” Sharon says. “To be honest, while we were doing it I had my doubts (it was hard work), but now that it’s done, I’m so happy. Also, I think it will help us out with financing when we come to do the major works in a few years time.”

It’s not all they’ve done to the previously dated house either. “We’ve done all the bedrooms, the living room and a lot of the garden as that’s a huge hobby of mine. Next up is the exterior, followed by the sunroom and bathrooms, but that won’t be happening until next year, once the baby is a bit older. We need a break!”

And fair enough, we say! 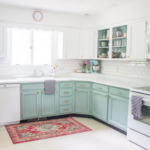 Chalk paint kitchen cabinets: 2 amazing before & afters and how-to
Making over your kitchen is remarkably easy using chalk paint. So, if you’ve been bitten by that lockdown DIY bug, we’re here to share a very easy way to transform your… 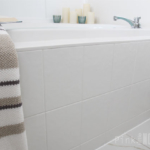 How to paint tiles and save a fortune!
By Naomi Findlay It’s no secret that kitchens and bathrooms are the highlights of the modern home. A tacky blue tile in the shower or 70s floral design can make… 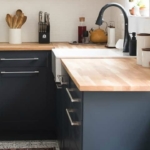 How to paint laminate cabinets
They say the kitchen is the heart of the home. Whether large or small, your kitchen deserves to look its best. But we all know how expensive a kitchen renovation…
FacebookPinEmailTweet