Pop Architecture worked alongside Beatrix Rowe Interior Design to carefully transform the extension and renovation of South Yarra House. This spectacular renovation combines the original Edwardian-era features with striking contemporary design and materials that work together to maximise natural light. Located in the same-named area in Melbourne’s south, South Yarra House showcases how embracing simplicity and natural elements can breathe new life into a home.

The client’s brief stipulated a focus on light and flow throughout new and existing areas, respect for the original Edwardian features, and a preference for curved edges and real materials. “This brief lead to a strong passive design philosophy and further exploration of the core idea via strategically placed glazing and the effect of light on curved forms and carefully selected materials,” says Justine Brennan, director at Pop Architecture.

A sculptural corbelled brick form anchors the addition of the red brick Edwardian home. Drawing inspiration from its surroundings, the home is heavily centred on the majestic Eucalyptus tree towering over the north-facing backyard. The impressive tree is immediately visible upon entering the Edwardian portion of the house through the introduction of a clerestory window in the main entry corridor. The tree continues to reveal itself as you move through the house.

In addition to the Eucalyptus tree, the design took inspiration from “the distinctive ornate brick chimneys punctuating the surrounding skyline” as well as the “dramatic effect of the northern sun hitting the otherwise nondescript corrugated iron fences in the back laneway. The ivory colour, curved parapet, and textured vertical corbel of the brick element, distills these influences into a simple yet striking focal point of the house,” describes Justine.

The single-storey addition sits at the rear of the existing, renovated home, which opens to the garden and courtyard space. A rooftop terrace sits on top of the addition, as an extension of the outdoor area. Throughout the home, subtle curves and an amalgamation of textures add modern touches and a point of difference. The original central corridor at the front of the home, opens up to a shared living, dining and kitchen space. Its vaulted ceiling and architrave detailing emphasising the Edwardian-era characteristics of the home. Curved plaster and rounded smooth stone cultivate an element of sculptural design and contrast in the home. Highlighting this contrast is the difference between the strong solid materials, like brickwork, stone and hard plaster in contradistinction with gentle elements like timber fretwork in the existing portion of the home. This contrast is embodied in the bedrooms, bathrooms and kitchen.

A key standout in the home is the brick form. “We had always conceived the sculptural form as having a vertical striated effect to evoke the qualities of the light-play we loved in the existing back laneway. While we explored many materials and applications to achieve this, it was bricks laid in the corbelled method that finally allowed us to create this effect,” says Justine. Adbri Masonry’s sandhurst stone quarter height concrete block in ivory was the ideal choice to achieve this. “We wanted a solid, slim format brick but with beautiful texture and tone. The Sandhurst Stone concrete block worked perfectly and allowed us to meet our intention of laying bricks vertically in a stepped fashion,” added Justine.

The sculptural brick form is featured in the addition of the home, creating a seamless flow between the indoor and outdoor spaces. The brick form wall stretches from the kitchen and laundry indoors, to the outdoor patio, including a woodfire pizza oven. “The construction of the feature brick form itself was one of the most satisfying parts of the project. Once the selected brick had been decided, it was a very collaborative process to resolve the final detailing which greatly enriched the design outcome. The bricklayer recalled learning the ‘corduroy’ method on one of his first ever jobs over 40 years ago, and was excited to revisit the technique in a contemporary way,” says Justine.

“Now a fully functioning and reimagined brick home, the owner often remarks that they enjoy living with such an interactive brick element. They particularly love the way the brick form takes on the characteristics of the day, changing colour and contrast as the day unfolds,” remarks Justine.

For more on Adbri Masonry 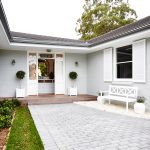 Jason Hodges’ expert guide to a Hamptons style outdoor area
For over a decade Australians have had a love affair with the Hamptons style, with the trend increasing throughout the… 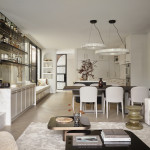 Sydney family home reno inspired by feminine energy
Designed by Smac Studio’s Shona McElroy, this semi-detached/duplex house is in Sydney’s Dover Heights and is home to a busy…
FacebookPinEmailTweet How to take the stress out of renovations